When speculation began in 2019 that the land on the northeast corner of Adelaide and Duncan Streets in the Entertainment District was potentially slated for redevelopment, the owners of Crocodile Rock were adamant that they were not closing and that they were staying put for the long term. That, however, did not pan out quite as they expected, when after almost 30 years of being a staple nightclub in the city, they announced that they were permanently closing in May, 2020 due to undisclosed circumstances. Several months later, the property was sold to Freed Developments, who have now come forth with a redevelopment proposal for a 68-storey mixed-use tower on the site. 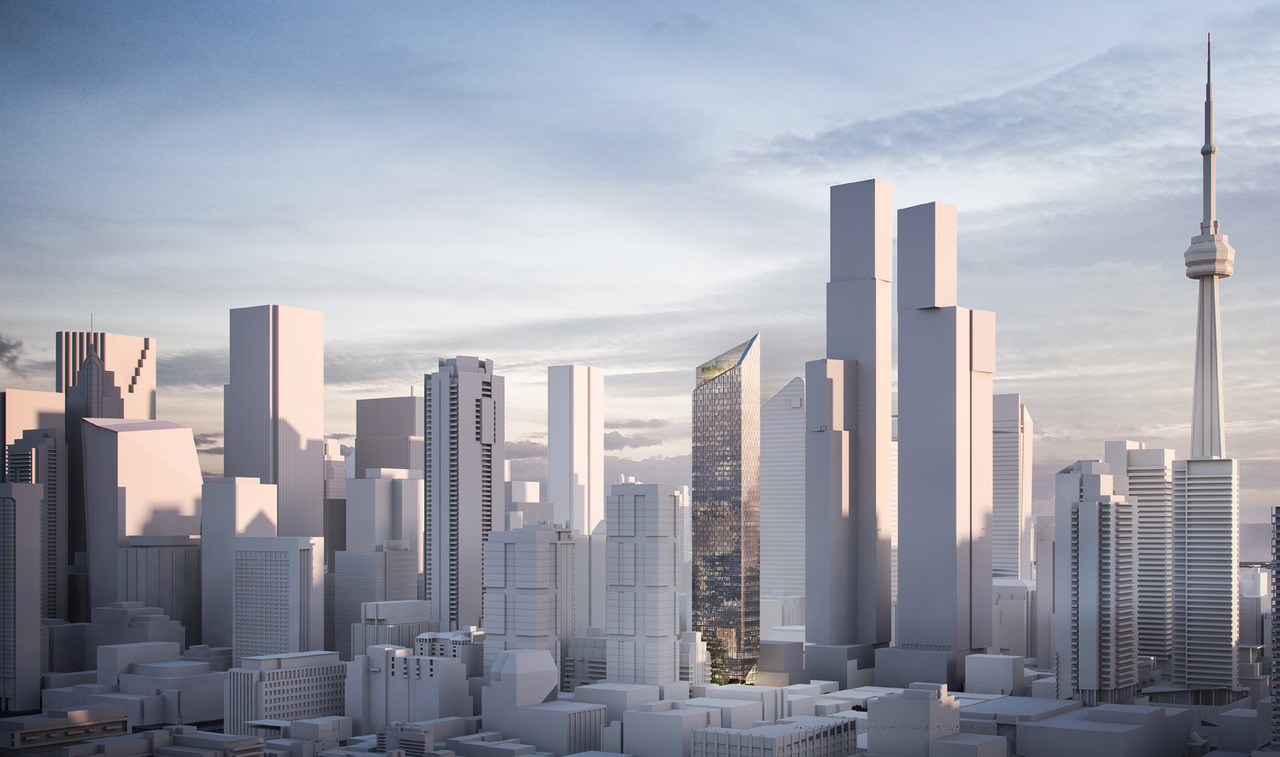 Rendering of 240 Adelaide Street West, image via submission to the City of Toronto.

The property is addressed to 240 Adelaide Street West and includes the row of 4 existing buildings stretching east from Duncan to 224 Adelaide West, currently the home of Burrito Boyz. Only one of the buildings is listed as having heritage value—224 Adelaide West—which is a one-and-a-half-storey cottage constructed in 1872 with a storefront addition, the last remaining cottage in a row of 8 similar houses that once stood on the site. 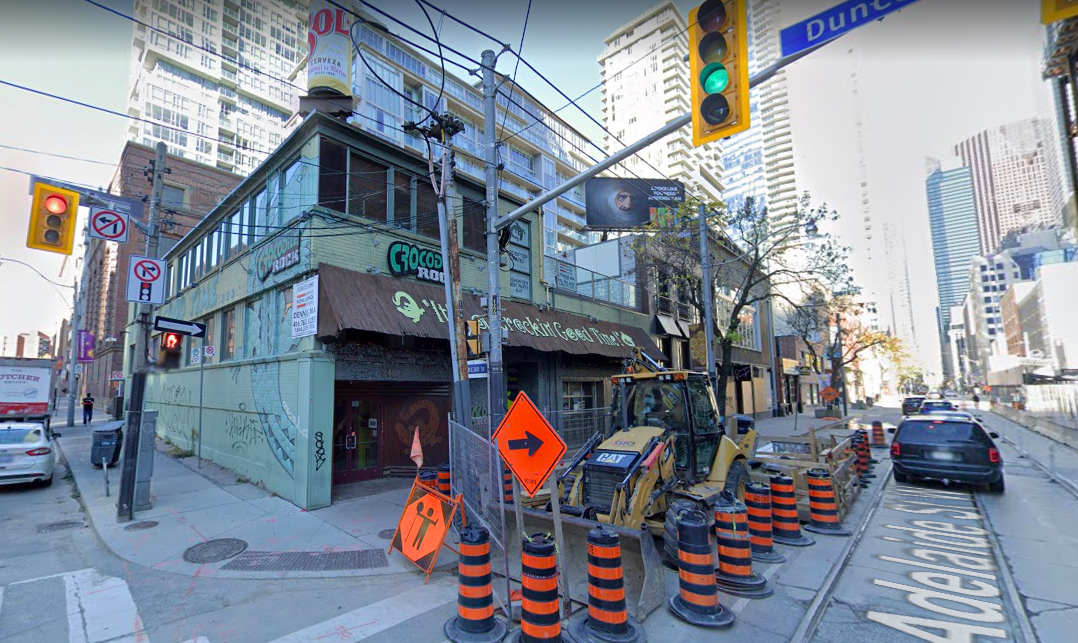 View of the property at 224-240 Adelaide West, image via Google Maps.

The tower would replace all buildings on the property, and would rise to a height of 68 storeys and 219 metres (718.5 feet). Designed by Chicago-based AS + GG Architecture, whose design for 160 Front Street West is currently being constructed a few blocks away, 240 Adelaide West will contain a total of 637 residential units, along with 2,225 m² of office space and 112 m² of grade-level retail. 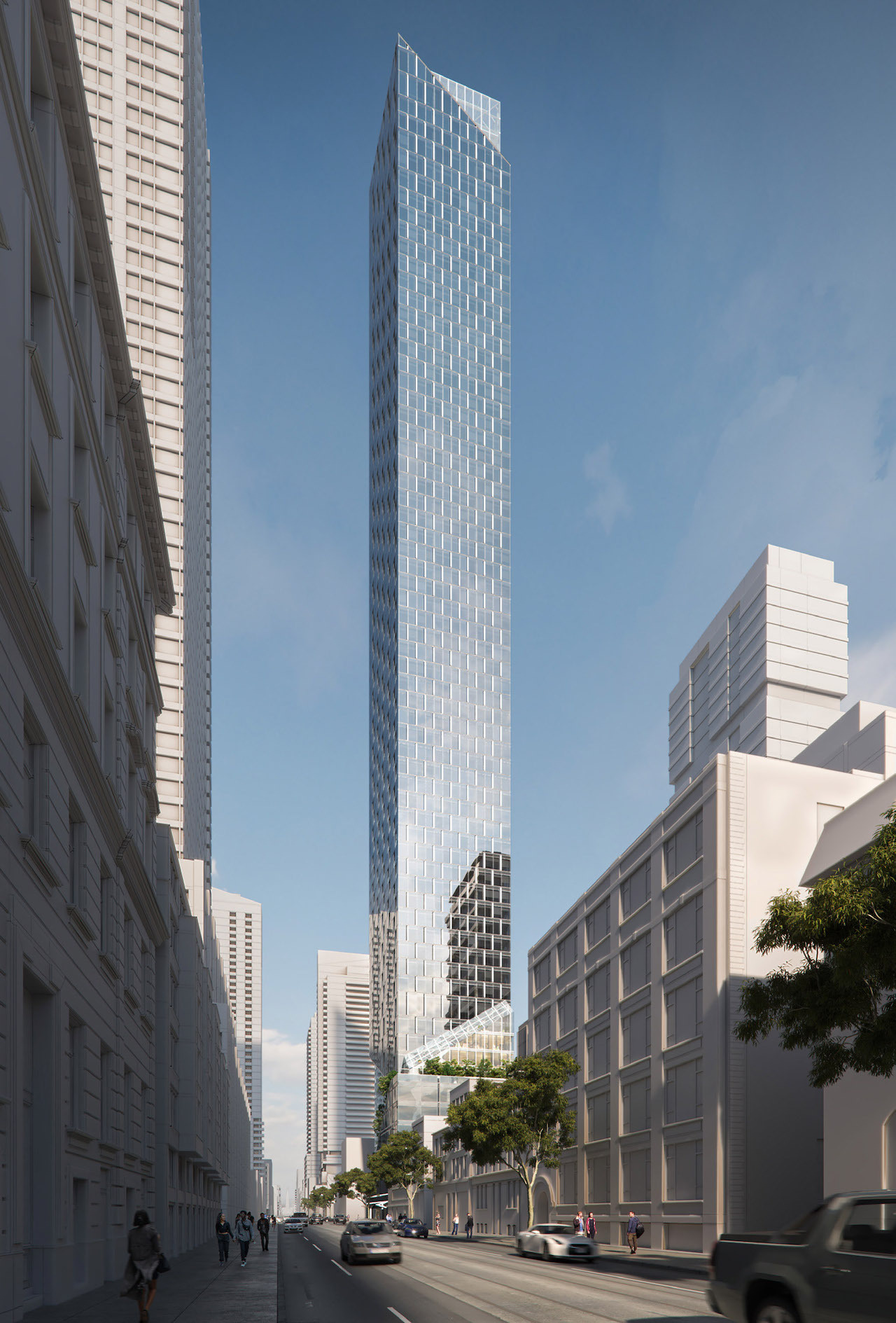 Rendering looking west, image via submission to the City of Toronto.

The tower takes on a unique form, particularly at the podium levels. Shifting away from the traditional Toronto podium that more or less follows the boundary of the property line, the lower levels of the building step back in a series of terraces, creating a reveal at the corner of the building where the tower form extends all the way to the ground. An angled cut above the podium mirrors the angled shape of the terraces below. 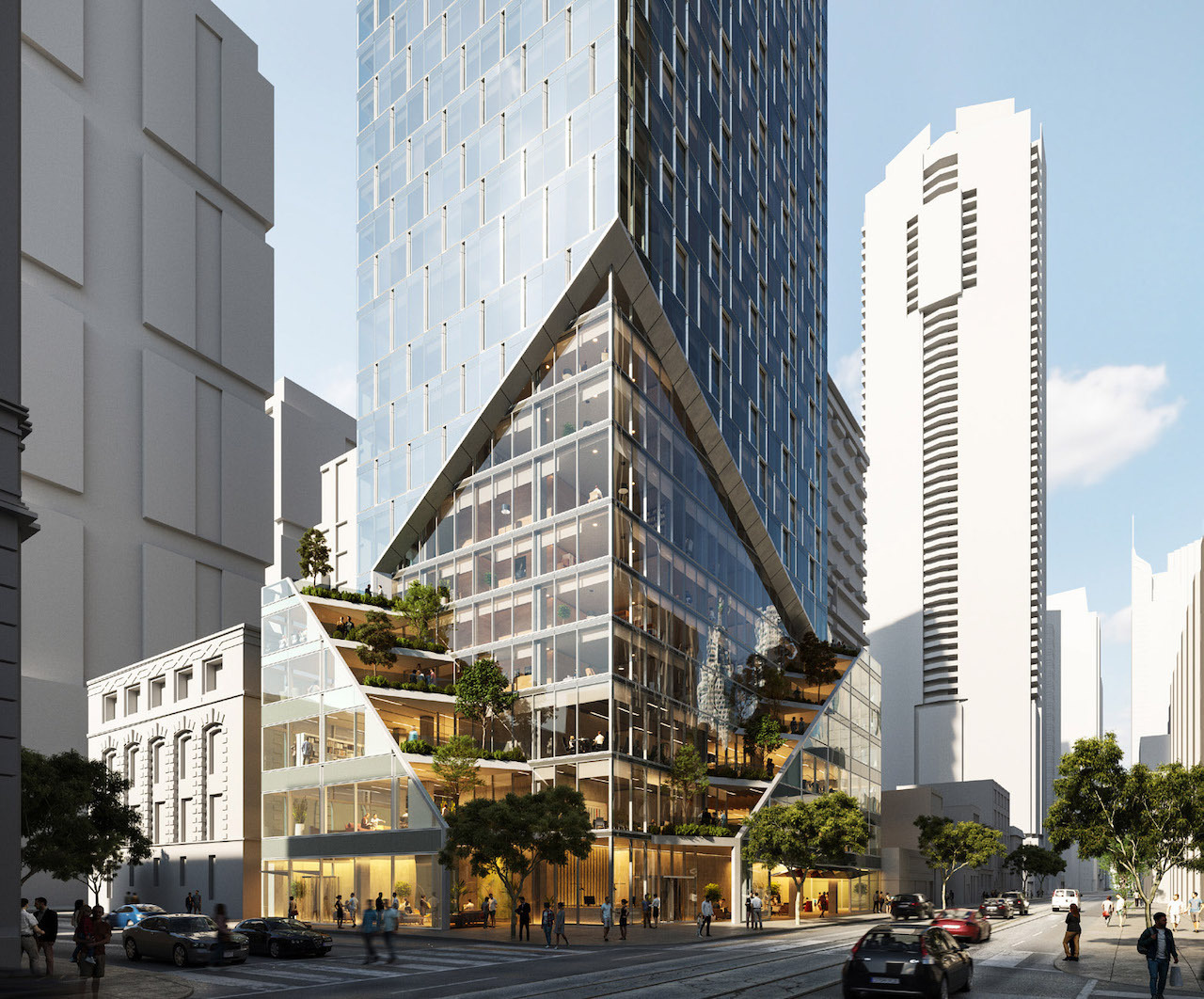 Rendering of the tower base, image via submission to the City of Toronto.

This angular motif is carried through to the top of the tower, where the roof of the building slopes upward to a distinctive peak, pointing southwest toward the CN Tower and future Mirvish+Gehry towers. 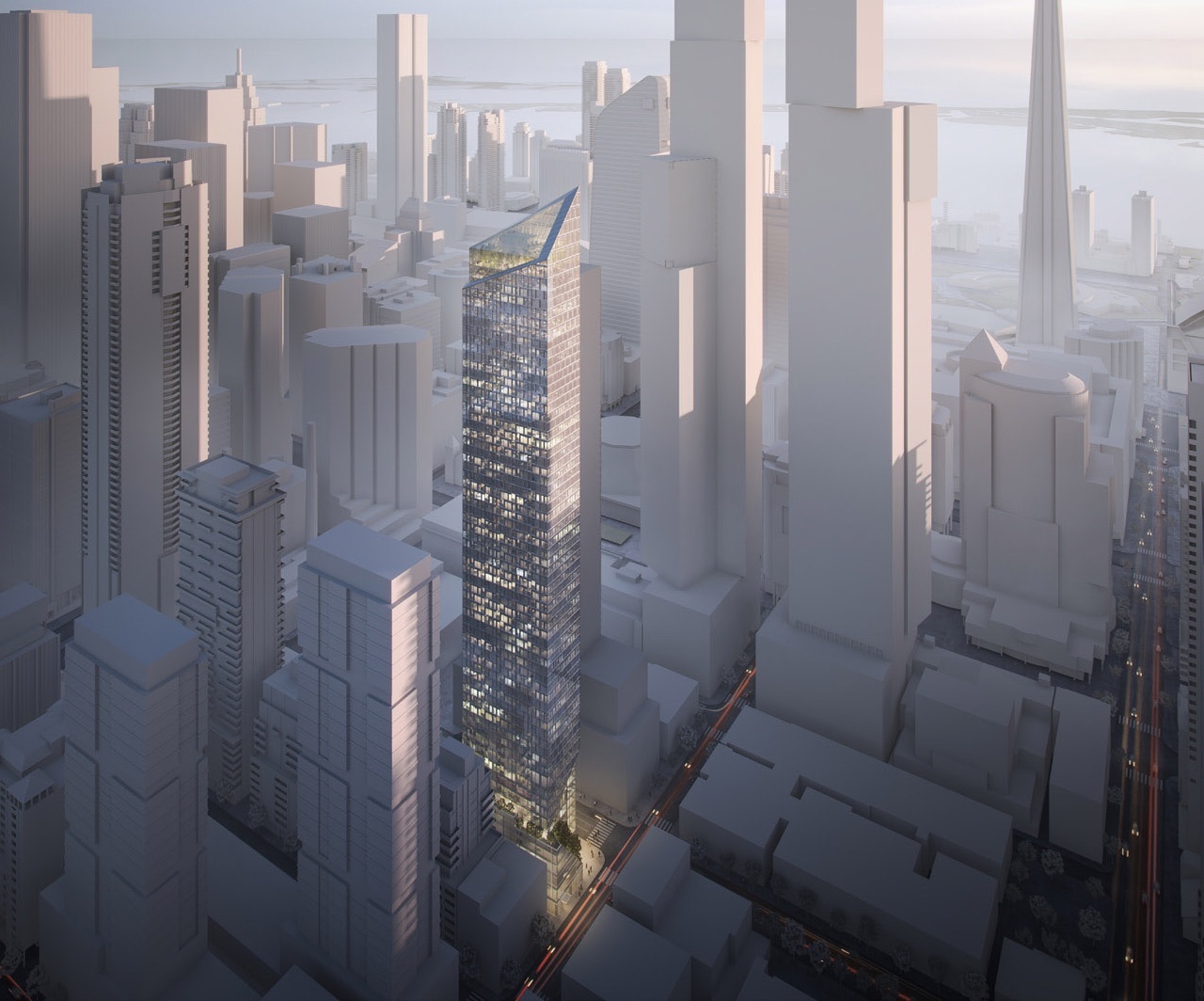 Aerial rendering looking southeast, image via submission to the City of Toronto.

The ground floor contains retail space with a shared lobby for the office and residential uses above, while the office spaces are located on Levels 2 and 3. The remainder of the tower is given over to residential uses, with indoor and outdoor amenities located on Levels 7, 12, and 67, including an indoor infinity edge pool on the 67th floor. The unit breakdown includes 74 studios (12%), 403 one-bedrooms (63%), 96 two-bedrooms (15%), and 64 three-bedrooms (10%). There are 57 vehicular parking spaces and 651 bicycle parking spaces provided on 6 below-grade levels. 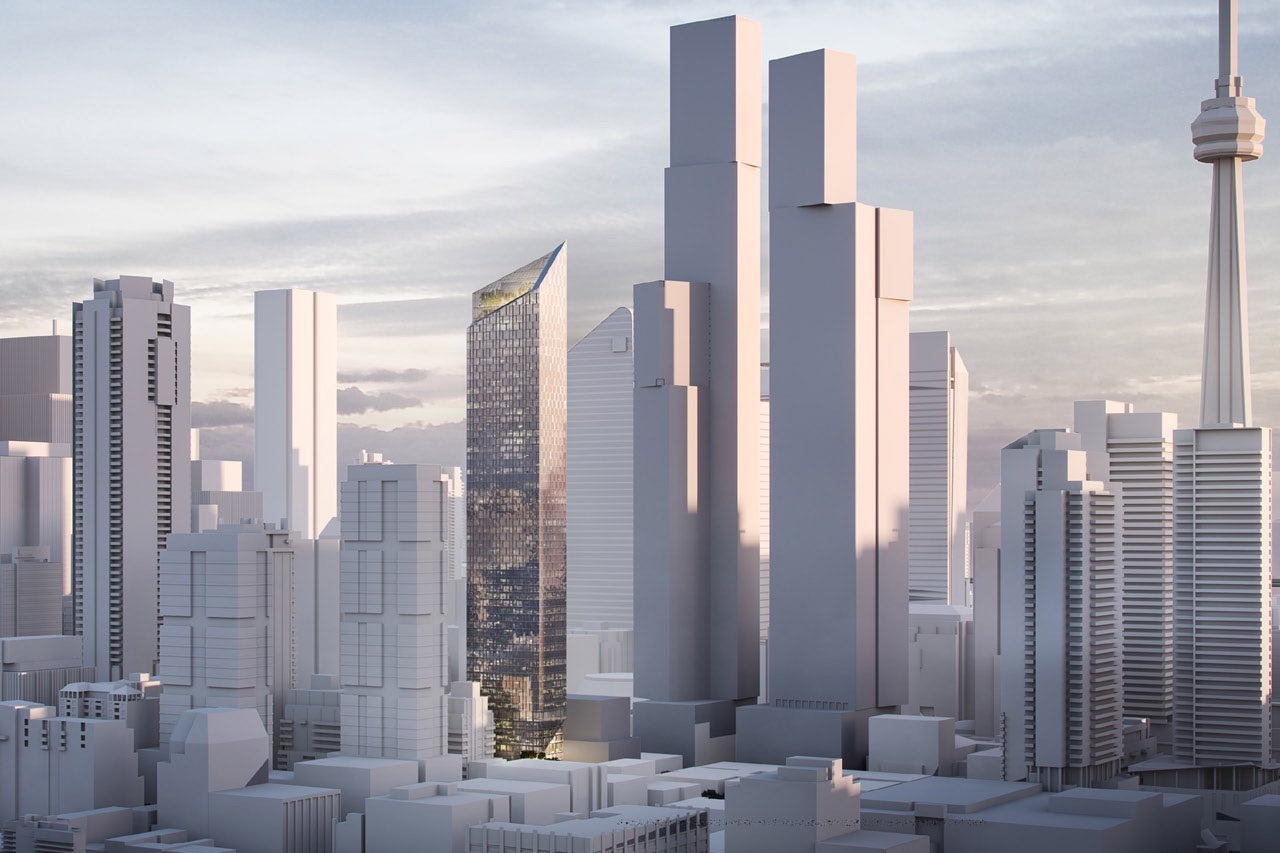 Rendering looking southeast, image via submission to the City of Toronto.

The building proposal has just been submitted to the City for Official Plan Amendment and Zoning By-law Amendment approvals, so it is only beginning its journey through the planning process. We will keep you updated as the design evolves.