In 2014, Dundas Residences Inc. submitted a Zoning By-law Amendment (ZBA) application to the City of Toronto, seeking to redevelop the southeast corner of Jarvis and Dundas streets. The proposed 47-storey tower was to be built within 5 metres of the southerly lot line that it shared with the Grand Hotel at 225 Jarvis Street. Toronto’s Tall Building Guidelines generally require 25 metres between adjacent towers, so Amexon Development Corporation, owners of the Grand, were concerned that the proposal to the north would negatively impact their ability to redevelop on their own property, and argued they should not have to shoulder 80% of the separation on their site. Proposing a development themselves, revised proposals were eventually approved at the Ontario Municipal Board in 2016, with the more northerly building required to have a smaller floor-plate that was 12 metres from the lot line. That proposal was eventually built as the 50-storey Grid Condos, (Grid can be seen on the left side of the photo below.) Now, Amexon is carrying out demolition work at the Grand Hotel site while having submitted a Site Plan Approval (SPA) application for a revised redevelopment proposal in October, 2020. 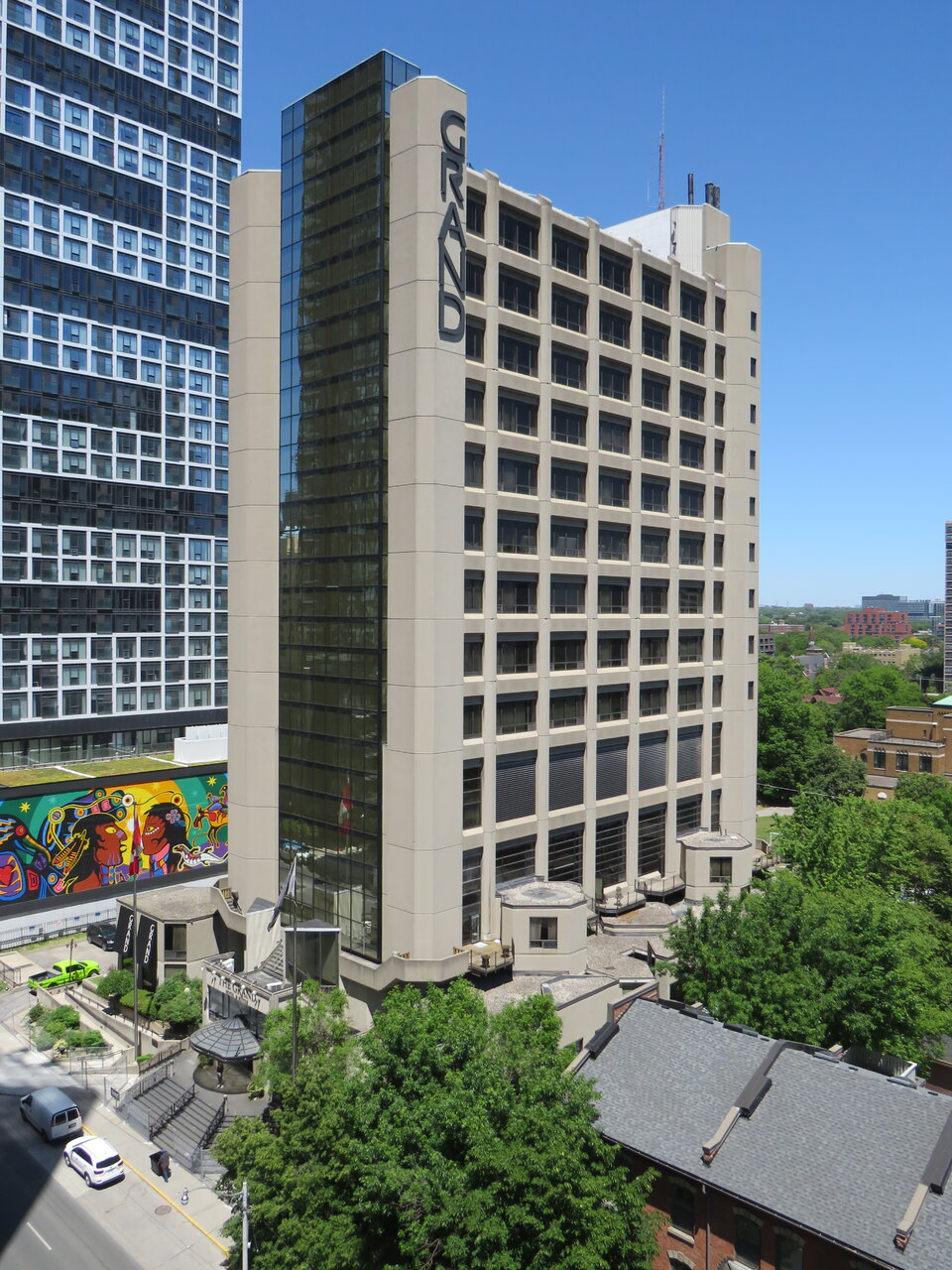 Looking northeast to the Grand Hotel in mid-June, 2020, image by Sean Marshall

Amexon’s original plan, designed by Core Architects, was to build a 45-storey tower attached to the north side of the 14-storey Grand, the structure of which was to be retained. In the image below, Grid Condos—not pictured—replaced the low-rise buildings to the immediate left of the Grand. Grid topped off in 2018 and was completed in 2019. 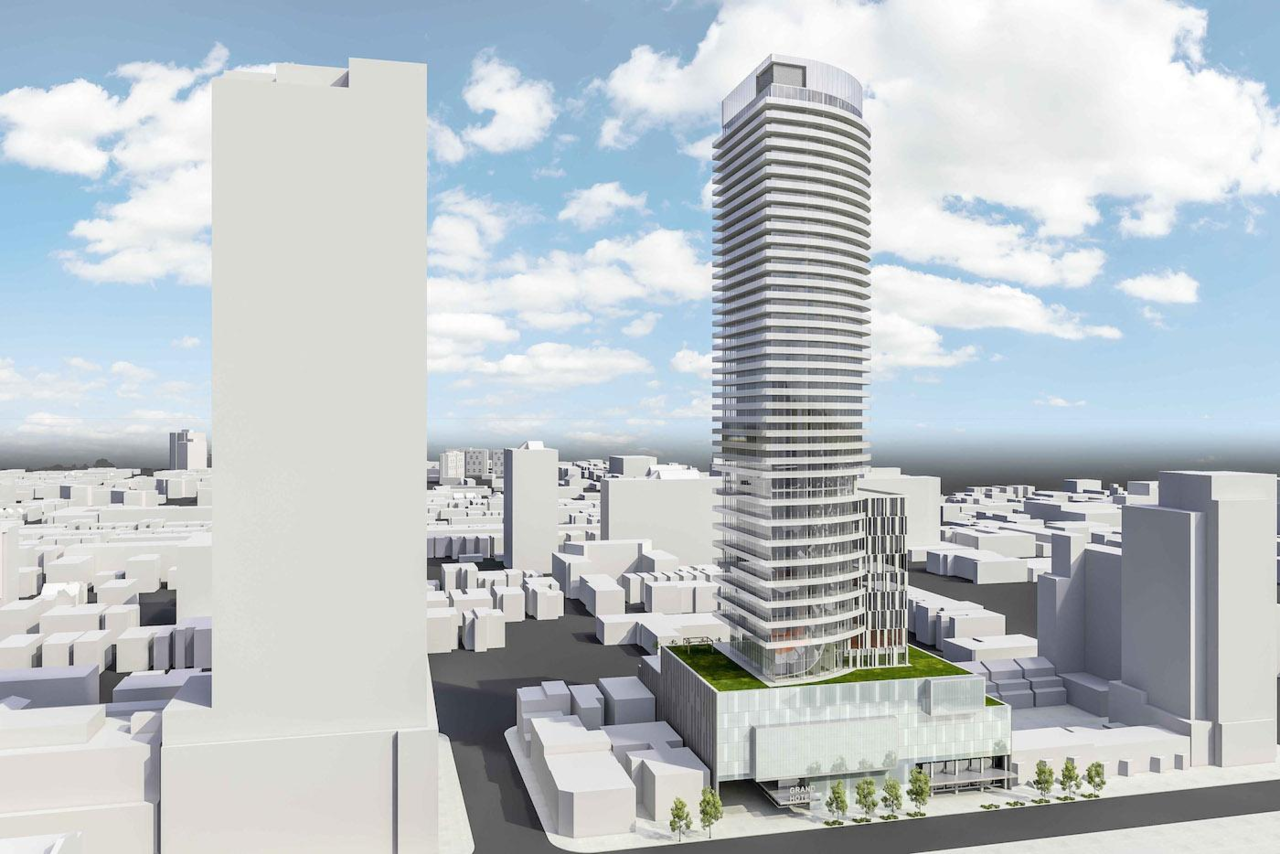 In December, 2019 Amexon submitted a demolition permit application to the City for the Grand Hotel. In the first half of 2020 the hotel continued to operate while front line medical workers dealing with Covid-19 at area hospitals were being housed for free. In mid-June the hotel closed, however, and interior demolition began. By the end of June, demolition had begun on the exterior too.

Looking up at demolition on the Grand Hotel, October 31, 2020, image by UT Forum contributor Benito

Amexon’s October, 2020 SPA application is for the Grand Hotel site is now for a 50 storey mixed-use hotel and condominium tower, retaining Core Architects for the new design. The existing structure is planned to be fully cleared for the new one.

Rendering looking north on Jarvis, image via submission to the City of Toronto

The new hotel will occupy floors 1 to 8, with condominium units occupying the upper floors. There are 240 hotel suites and 581 condo units proposed in the complex, 14 of which are street-facing townhouse units facing George Street on the property’s east side. The proposed unit mix is 286 one-bedroom and 281 two-bedroom suites, with average areas of 51.45 m² and 74.73 m² respectively.

Contextual elevation of Jarvis frontage, image via submission to the City of Toronto

Contextual elevation of George Street frontage, image via submission to the City of Toronto

There are 6,730 m² of indoor amenity space planned, spread across levels 2 to 8, as well as two outdoor rooftop spaces on levels 6 and 21. The sixth floor deck will include an indoor/outdoor lap pool and a hot-tub. At the south end of the ground floor facing Jarvis Street there is planned to be a hotel restaurant.

Amenity spaces including indoor/outdoor lap pool on level 6, image via submission to the City of Toronto

Documents submitted to the City show a wide range of planned cladding materials. The podium is to be clad brick-finish precast concrete and metal paneling, with curtain-wall windows shaded by aluminum louvres, while the tower will be dominated by window-wall and aluminum cladding. The material selection, particularly of the podium, is intended to complement the neighbouring heritage row-houses.

Rendering showing ground-floor hotel restaurant and contextual relationship with neighbouring heritage row-houses, image via submission to the City of Toronto

At 160.8 m, the proposed tower is significantly taller than the existing hotel, and 3 metres taller than the adjacent Grid Condos. The St Michael’s Hospital helicopter flight path impedes building tall above over half of the site, so the southern portion of the site affected by it is restricted to 20 floors high. The highest 30 storeys of the complex has a triangular floor-plate, with the southern facade cut away at an angle parallel to the plane of the restricted airspace.

View looking northeast, showing stepped-back massing and angled facade above the 20th floor, image via submission to the City of Toronto

A typical floor-plan of floors 10-19, image via submission to the City of Toronto

A typical floor-plan for floors 40-50 with reduced footprint, image via submission to the City of Toronto

A five-level underground garage is planned with space for 429 motor vehicles. Storage for 589 bicycles is planned onsite, with 523 bike lockers for residents to be located on P1. The remaining spaces are for visitors and commercial users of the building. Timelines for the redevelopment are not yet known.

Development nodes assorted throughout Mississauga are reshaping the city west of Toronto, from the formation of a more urban Downtown at Burnhamthorpe and Hurontario, to…

Despite headlines to the contrary, Canada’s housing market is in the early stages of a slump, claims a new report from the Real Estate Investment…

A new mid-rise condominium development is making quick construction progress on The Queensway west of Royal York Road in the Toronto borough of Etobicoke. Dubbed Queensway…