Canada’s First Supertall ‘The One’ Shooting to be Supertaller

There’s a major update in the race to build Canada’s new tallest building.

The current tallest building in the country is the BMO Tower at First Canadian Place. It’s a 72-storey office tower that was completed in 1976 and has held the title, at 298 metres, ever since: office towers simply have not been built that large in this country over the intervening decades. For years, in fact, Toronto wasn’t getting any new office towers Downtown as office-building activity moved to suburban office parks. The towers are now coming back to Downtown though, and have been for the last decade, although developers—with few exceptions—have simply been creating buildings with less volume that can be filled more quickly. Now, it’s the condos that are vying to take the height crown.

More specifically, developers looking to take the height crown are now proposing or constructing multi-use buildings that are predominantly a residential condo tower. Of the highest three, each has retail space and a hotel on the lower floors before switching to condos.

The furthest out of the three is the taller of the two Mirvish+Gehry towers designed by Frank Gehry for Great Gulf and Dream, planned for King Street West on either side of Duncan Street. Proposed to rise 328.86 metres tall, the 91-storey structure to the west side of Duncan is not yet in sales. 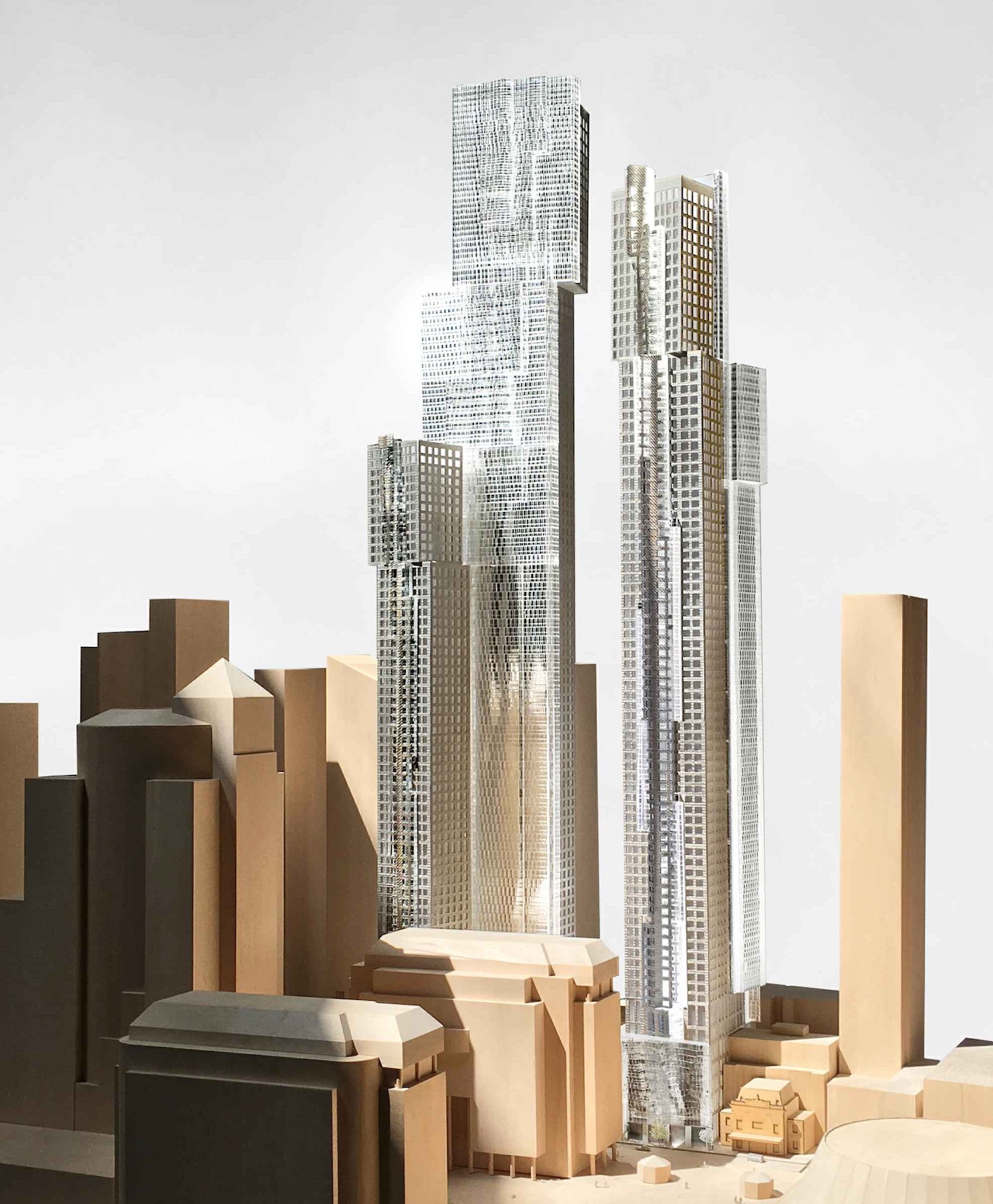 Looking northwest to Mirvish+Gehry, designed by Gehry for Great Gulf and Dream

Work started recently on the SkyTower at Pinnacle One Yonge, designed by Hariri Pontarini Architects for Pinnacle International, where excavation started in the last couple of months. To rise 95 storeys tall and reach 312.5 metres, it could hold the record until the Mirvish+Gehry west tower goes up, after it surpasses the 85-storey, 308.6-metre-tall The One, now under construction a few floors above ground level at Yonge and Bloor… 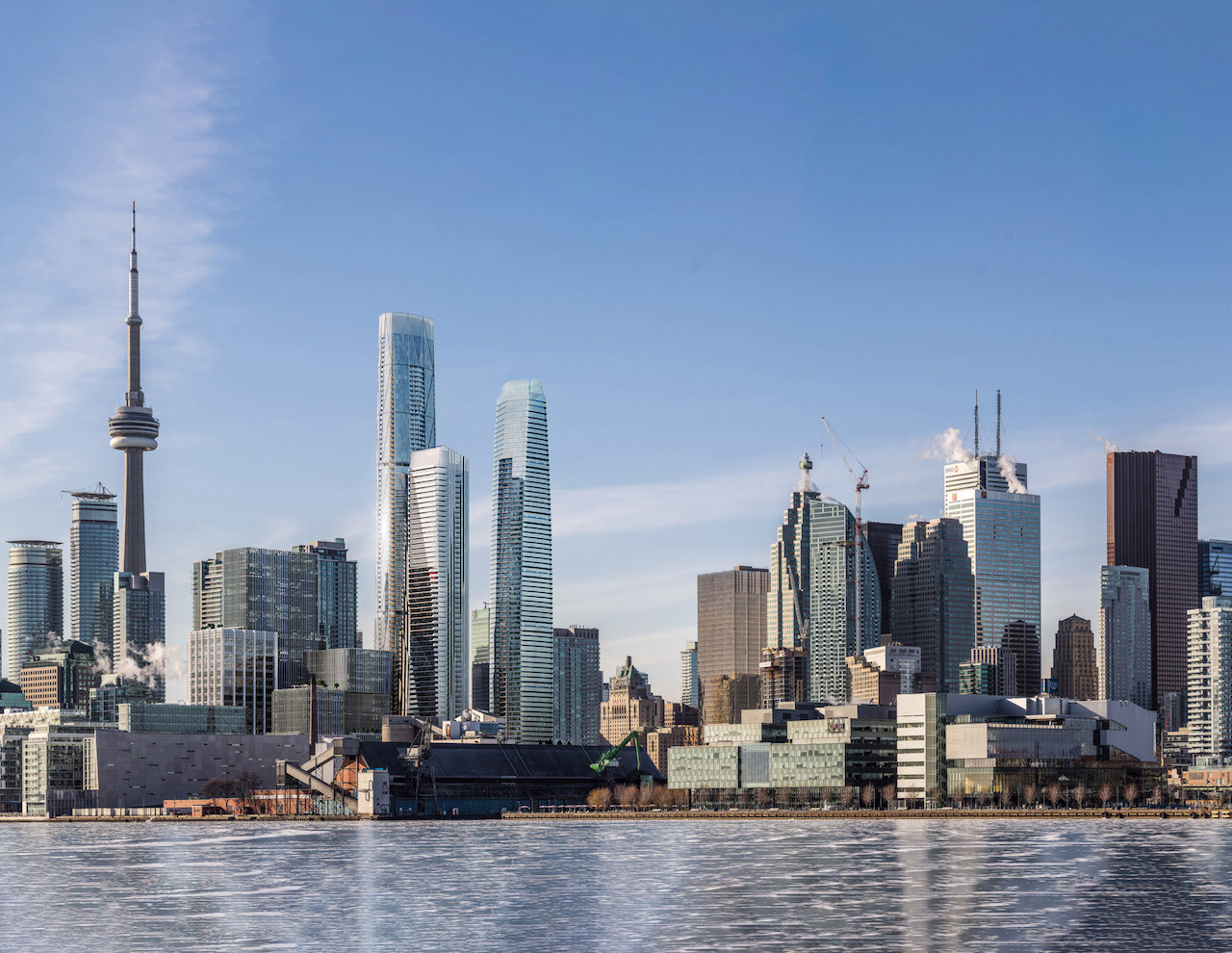 Looking northwest to the multi-tower Pinnacle One Yonge, designed by Hariri Pontarini Architects for Pinnacle International

…except that Mizrahi Developments have now applied for a height increase for The One which, if approved as submitted, would take the crown over both the SkyTower and Mirvish+Gehry, and make The One a 94-storey, 338.3-metre-tall building, the tallest of any planned in Canada. The Foster + Partners and Core Architects-designed The One will already be Canada’s first ‘supertall’, a designation given to buildings over 300 metres, now it’s shooting to be supertaller, to grab the crown, and retain it.

Looking east to The One, 94-storey version, designed by Foster + Partners and Core Architects for Mizrahi Developments

The Planning Rationale Addendum document that has been submitted to the City by the proponents explains it this way:

“Since the original rezoning submission in 2015, the surrounding area has experienced much new redevelopment and population growth. In addition, new policy directives have been approved to guide development and design within the subject area, and the province.

Issues relating to shadow impact have changed, given the additional construction that has occurred. Based on the enclosed Shadow Study, prepared by CORE Architects, the proposed increased tower height no longer casts a significant shadow impact.”

That is to say that since The One was first proposed, enough other new buildings around it have gone under construction or have been approved that would block any significant new shadow on areas where the City is typically desirous of maintaining sunlight, such as parks. The rallying cry for this particular area has proven to be Jessie Ketchum Park to the northwest of the Bloor-Yonge node, on the west side of Bay Street north of Scollard. Sun and Shadow Studies are required by the City to denote shadows on the 21st of March, June, and September, every hour from 9:18 AM until 6:18 PM. Updates studies now show that the increased height of The One proposal would briefly add shadow to Jessie Ketchum Park at 10:18 AM on March and September 21, all gone by the 11:18 window. In the image below by Core Architects, the blue area shows the additional shadow cast on the park at 10:18 AM on March and September 21. The red area is the tower. The building casts no shadow on that park at any other of the times studied, including none at all in the summer. 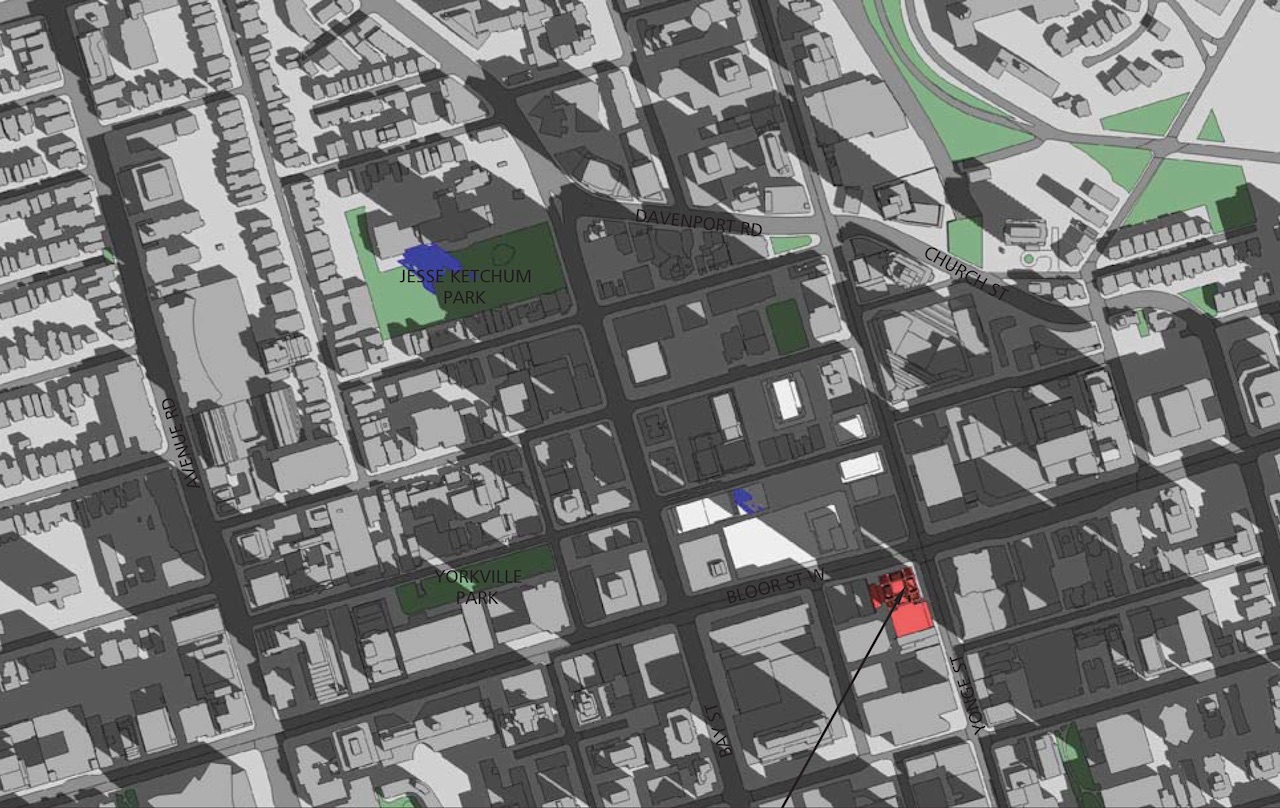 Shadows from The One, designed by Foster + Partners and Core Architects for Mizrahi Developments

The Planning Rationale states for people looking at it from most vantage points, the “proposed height increase will not create an obvious change to the appearance of the building, given the nature of the proposed request and the current height approved. At street level, there will be no noticeable change at all.”

The building’s structural design is currently unique in Toronto, being held up chiefly by eight ‘supercolumns’, two to each side, from which sets of floors are hung. Each set of hangers supports 6 storeys, and sets are ganged up in threes, separated by inset mechanical floors, other than at the top of the top. In the previous 85-storey version, there was only one set of hangers above the uppermost inset mechanical section. In the current 94-storey proposal, there are two sets of hangers above the uppermost inset section, with another three storeys above the uppermost hangers. The last two storeys are not separated by an opaque band, giving those floors the appearance of being one exceptionally tall floor to cap things off. 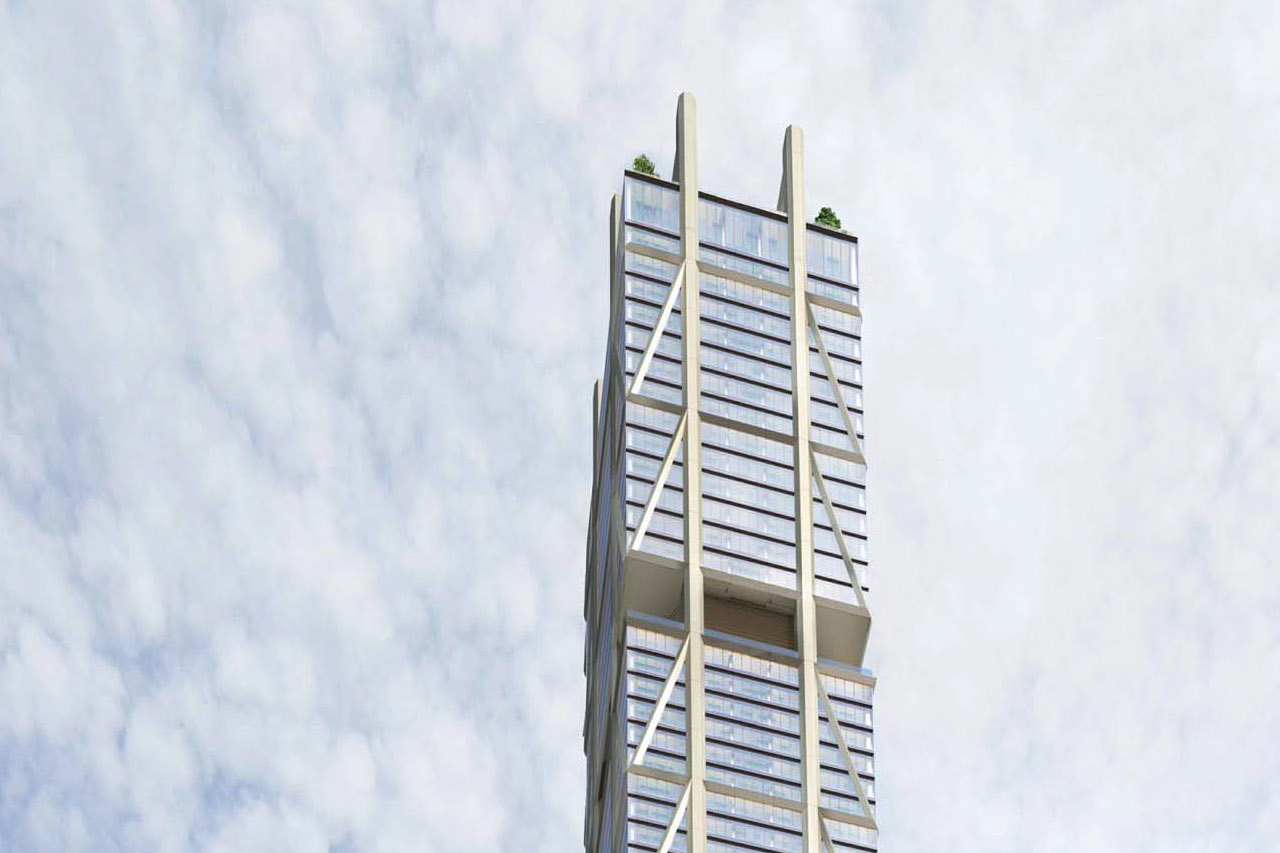 The top of The One, 94-storey version, designed by Foster + Partners and Core Architects for Mizrahi Developments

The nine additional storeys—which the supercolumns are already engineered to carry—would all be residential, adding 89 units for a total of 505. The earlier total of 416 units were to be served by a 314-space garage, but fewer parking spaces per unit have been selling than were allowed for, so now a garage with 296 spaces for vehicles is being applied for, with enough space turned over to now park 547 bicycles. The total area of the building would increase to 85,664 m², giving the lot 30.1 times coverage.

There will be a public consultation to present the changes for feedback, dates to be determined. Following the consultation and the Planning Department’s review, should the increase be deemed acceptable by Planning, the Department would recommend it to the City for approval. The local Council would then get a look to determine whether they would send it on to City Council with a recommendation for approval or not. It is not known how long the review will take at this point, nor when it will end up in the hands of City Council, but it would be many months away at this point. In the meantime, construction of the tower, whether it is eventually approved at an increased height later in the year or not, will continue skywards.