Metrolinx has released the Preliminary Design Business Case (PDBC) for the Ontario Line subway, detailing the project’s design and benefits for the community, reflecting feedback from residents and business people. The document notes several benefits, including faster travel and better transit access and capacity. Most significantly, it no longer uses “2027” as the year that it will complete construction and open the line. 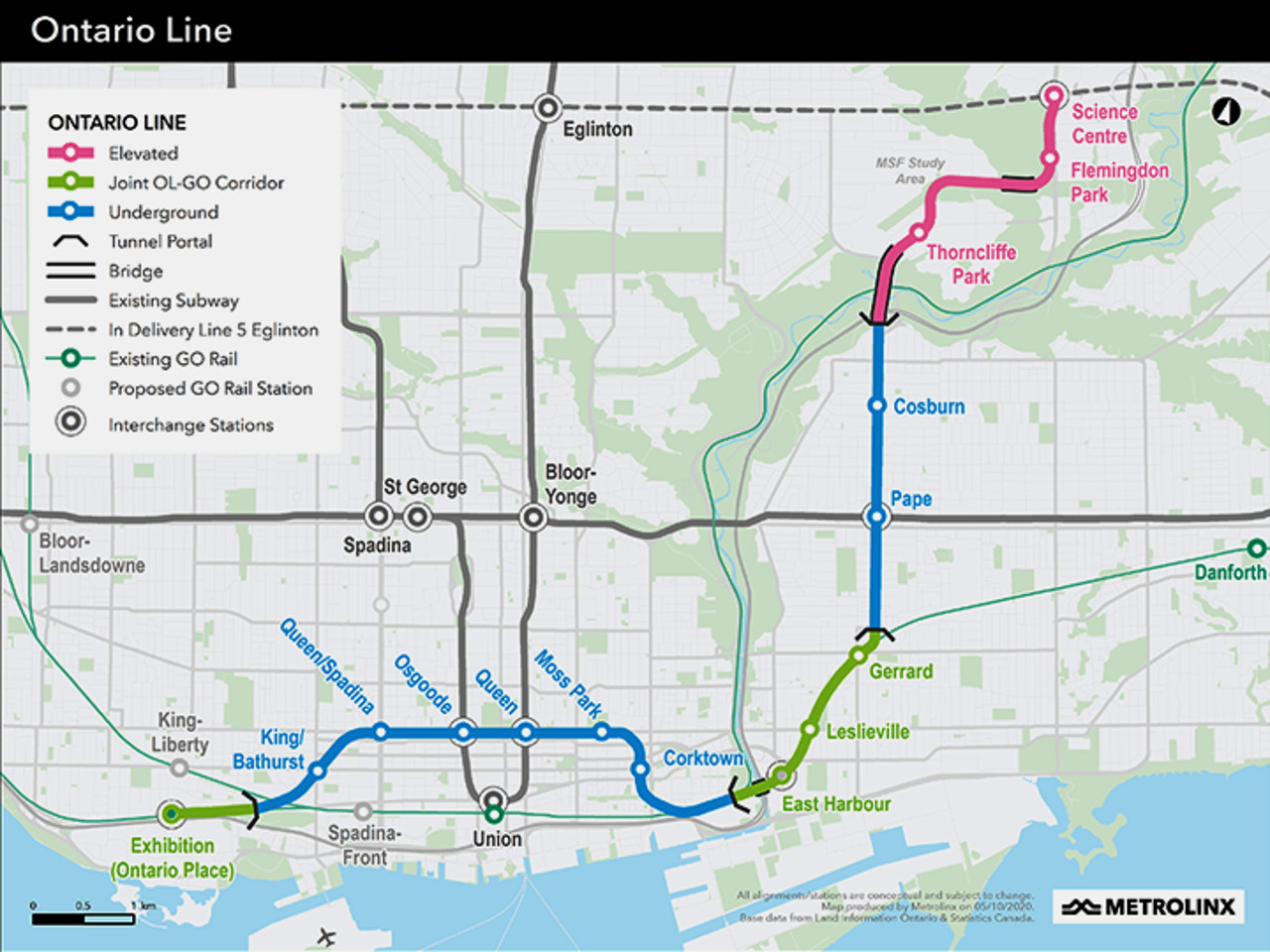 The PDBC updates the initial business case (IBC) for the line, which the Metrolinx released in July, 2019. Since then, Metrolinx has refined the design in several ways, including:

Ontario Line trains would operate on the surface between Exhibition Place and a portal just west of Strachan Avenue, plunge underground into a deep tunnel below downtown Toronto and re-emerge through a portal near GO Transit‘s Don Yard (northeast of the intersection of Cherry Street and Lake Shore Boulevard East.) Trains would then climb to travel beside GO’s Lakeshore East and Stouffville line before again entering a tunnel north of Gerrard Street East, near Pape Avenue.

The future King – Bathurst Station would extend diagonally under the intersection. Image, Metrolinx

The line would again proceed on an elevated structure, first to cross the deep Don Valley and then to a station on Overlea Boulevard in Thorncliffe Park. It would continue on the elevated guideway north of the residential areas about 300 metres parallel to Overlea, cross Ernest Thompson Seton Park to join Don Mills Road south of the Science Centre Station, where it would stop at a new Flemingdon Park Station. It then continues above-ground over Don Mills Road to connect with the Crosstown LRT line at Science Centre Station.

UrbanToronto already outlined much of these revised features of the line in a recent series of articles. As we noted before, we still don’t know finer details of the stations including the sites for entrances, ventilation shafts, and emergency exits. However, responding to comments from members of the public, Metrolinx now proposes two alternatives for operating the line on opening day. The first alternative proposes operating the line under the conditions of the initial business case; 100 metre (five-car) trains, each carrying 750 passengers, with 40 trains operating along the line during rush hours and 12 to 24 trains off-peak. The second alternative would be to start with 80-metre (four-car) trains, each carrying 600 passengers. The second version would start with just 34 trains per hour during the peak periods, then increase to 40 trains by 2041. Off-peak service would be 24 trains.

Key to both scenarios: the PBDC lists the starting date for Ontario Line service as 2030 – a full three years from the 2027 date that Ontario Premier Doug Ford described when he announced the line in April, 2019.

The second alternate slightly decreases the amount of revenue the line would gather, the capital costs and the operating costs, meaning the revenue/operating cost ratio decreases to 1.7 from 1.6. Both alternatives—using the new alignment north of the main part of Thorncliffe Park—decrease the number of passengers that the line would attract from 389,000 trips per day to 374,000 trips per day (alternate two). The number of jobs accessible by transit decreases from 53,000 with the initial business case alignment, to 47,000 under the PBDC route. The number of jobs accessible to lower-income Torontonians within 45 minutes by transit slides from 66,000 with the IBC plan to 57,000 with the PBDC proposal. 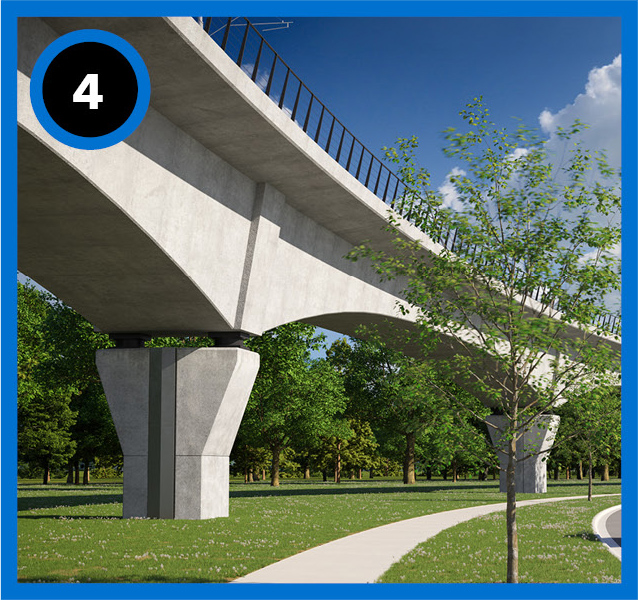 Elevated guideways similar to this one would support the Ontario Line through the Thorncliffe and Flemingdon areas. Image, Metrolinx

The PBDC now clearly specifies that Ontario Line passengers will pay standard TTC fares, meaning that transferring between the new line and other TTC subways, buses, and streetcars will be easier. 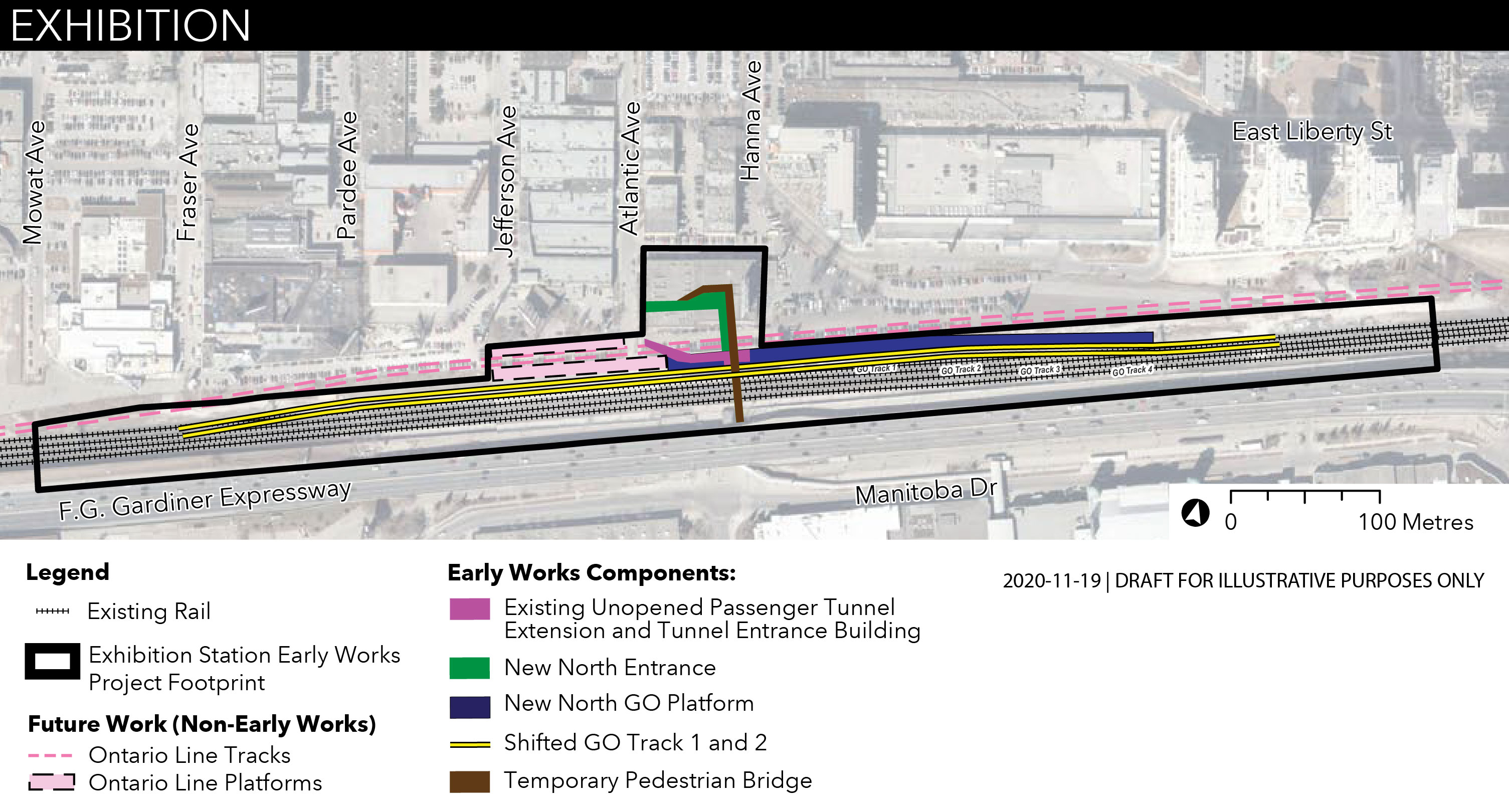 The IBC assumed a cross-platform interchange between GO and Ontario Line trains at Exhibition Station. The updated PDBC design has both Ontario Line platforms on the north side of the GO tracks. Although that creates longer transfer times for passengers, the updated station design reduces capital and staging costs (the previous design required underground tail tracks and four portals), lowers construction risk and complexity and enables Metrolinx to build an additional island platform for express GO trains. The new design protects for future changes to the Ontario Line, including a possible westward extension and a future cross-platform interchange with GO trains. 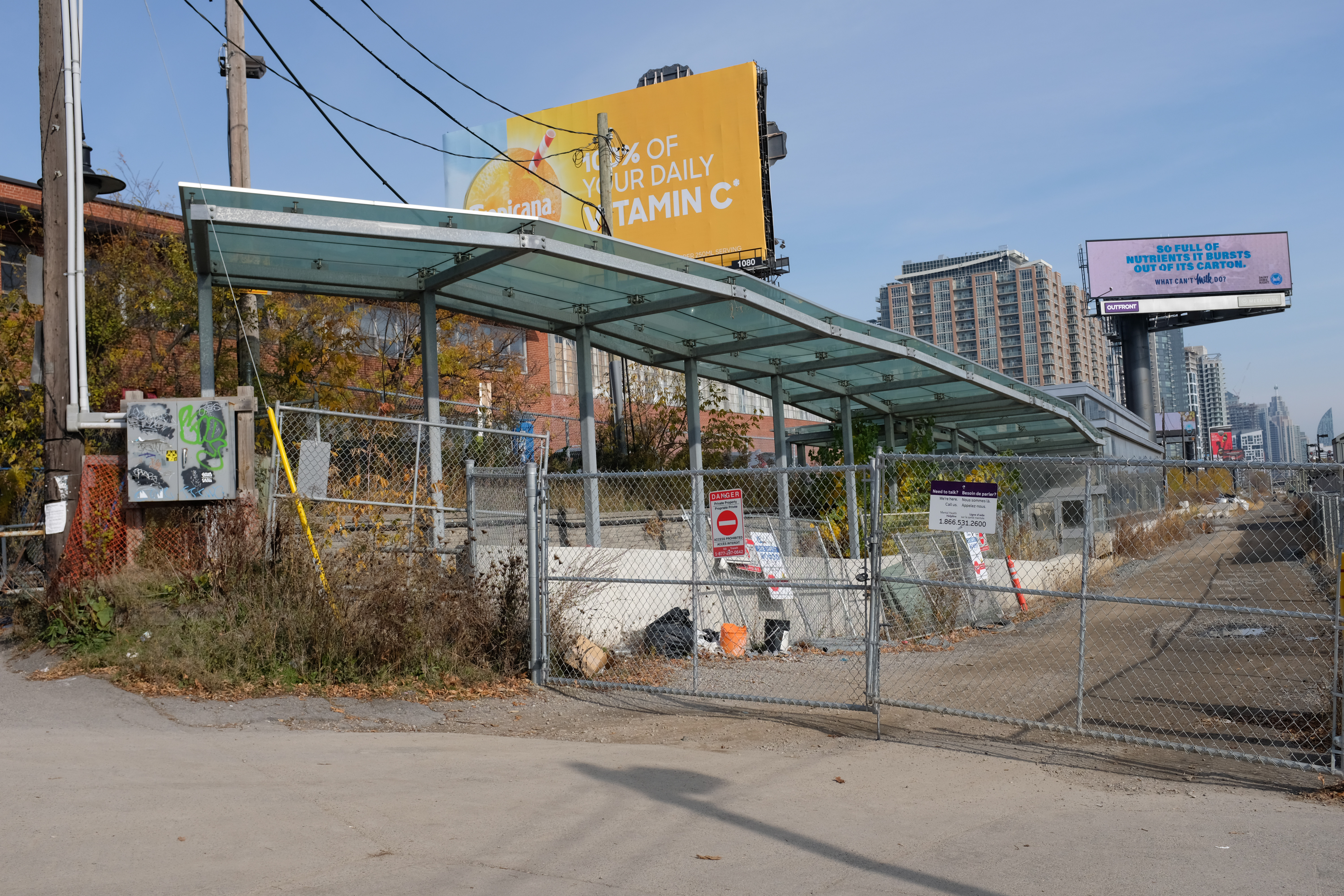 Metrolinx will open an out of service passenger tunnel extension and station entrance. This newly opened tunnel and entrance with a walkway to Atlantic Avenue will be in service until construction crews have completed the new north entrance. Metrolinx will remove the current platform access at the bottom of Atlantic Avenue to accommodate construction of the new north GO platform and shifting GO Track 1. 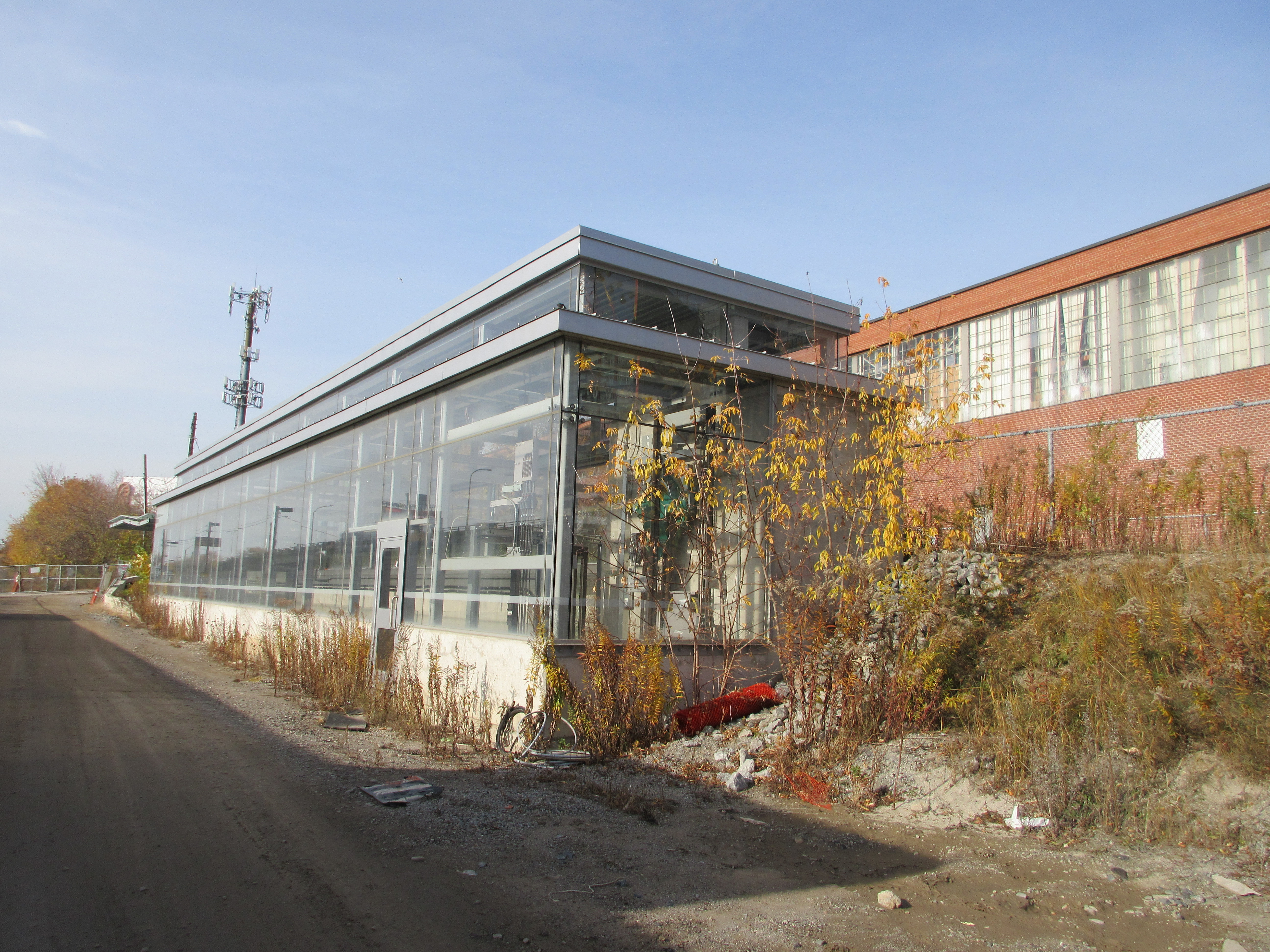 A temporary pedestrian bridge spanning the rail corridor will provide more access to reach station platforms and enhance cross-corridor access for trips to and from Liberty Village. The bridge will also reduce potential congestion in the tunnel during special events at Exhibition Place or Ontario Place. The bridge will stay in place until the Ontario Line is in operation.

You can read the initial business case for the Ontario Line here (.pdf).

You can read a summary of the preliminary design business case here (.pdf).

You can read the full preliminary business case here (.pdf).

You may add your comments on the project in the space provided on this page, or join the discussion in our dedicated Forum thread.