The site of a former commercial plaza at the south end of the Toronto neighbourhood of Cabbagetown could be replaced with a mixed-use mid-rise if approved by Council. Just before the end of 2020, developer Plaza submitted a Zoning By-law Amendment application to the City to build a 10-storey condo with retail at 401 Dundas Street East. 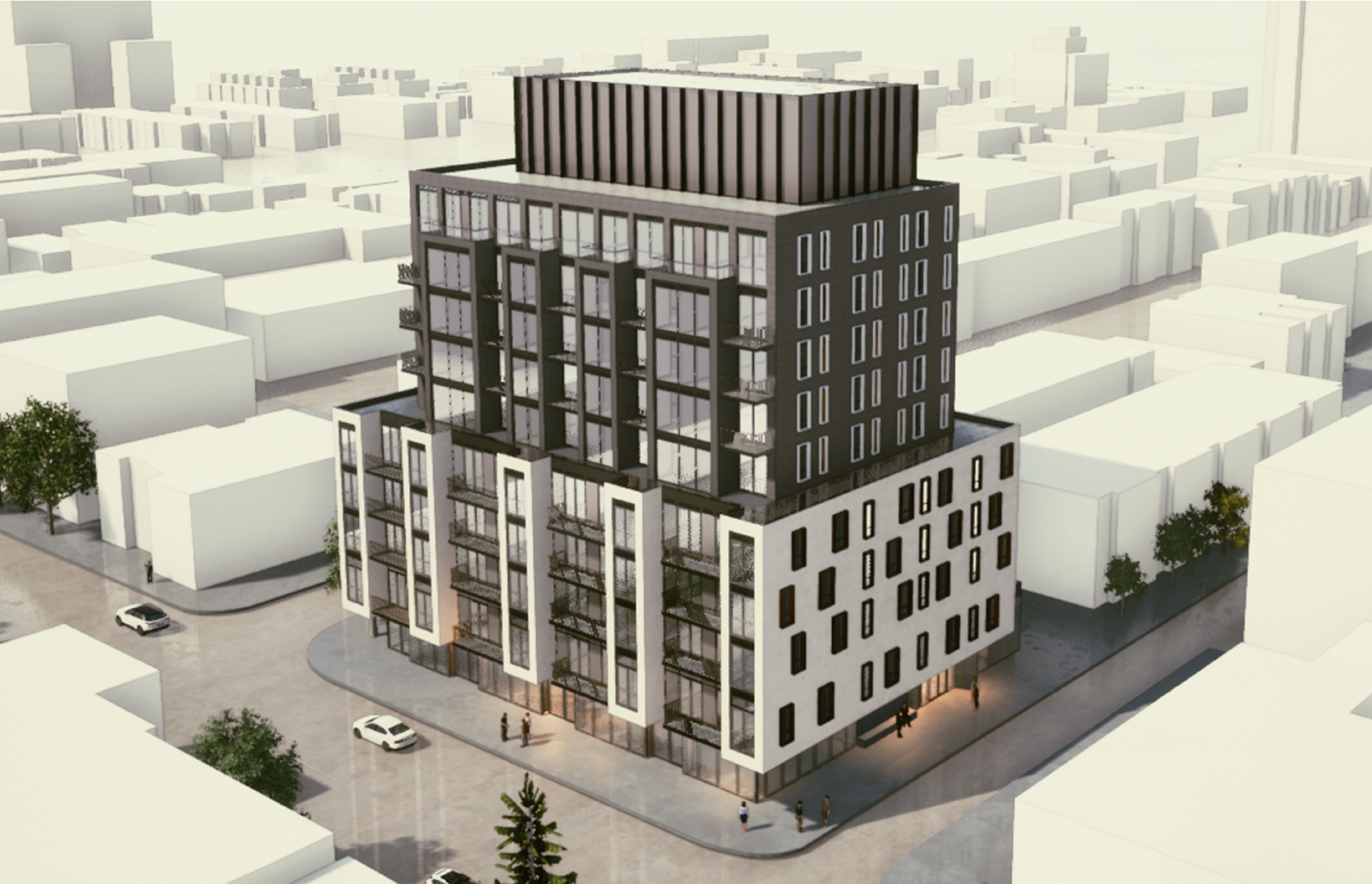 The 0.31-acre site is located on the south side of Dundas, 140 metres west of Parliament Street. It is currently occupied by a 2-storey commercial building that includes an auto service, other commercial uses, and a surface parking area spanning the Dundas Street frontage. 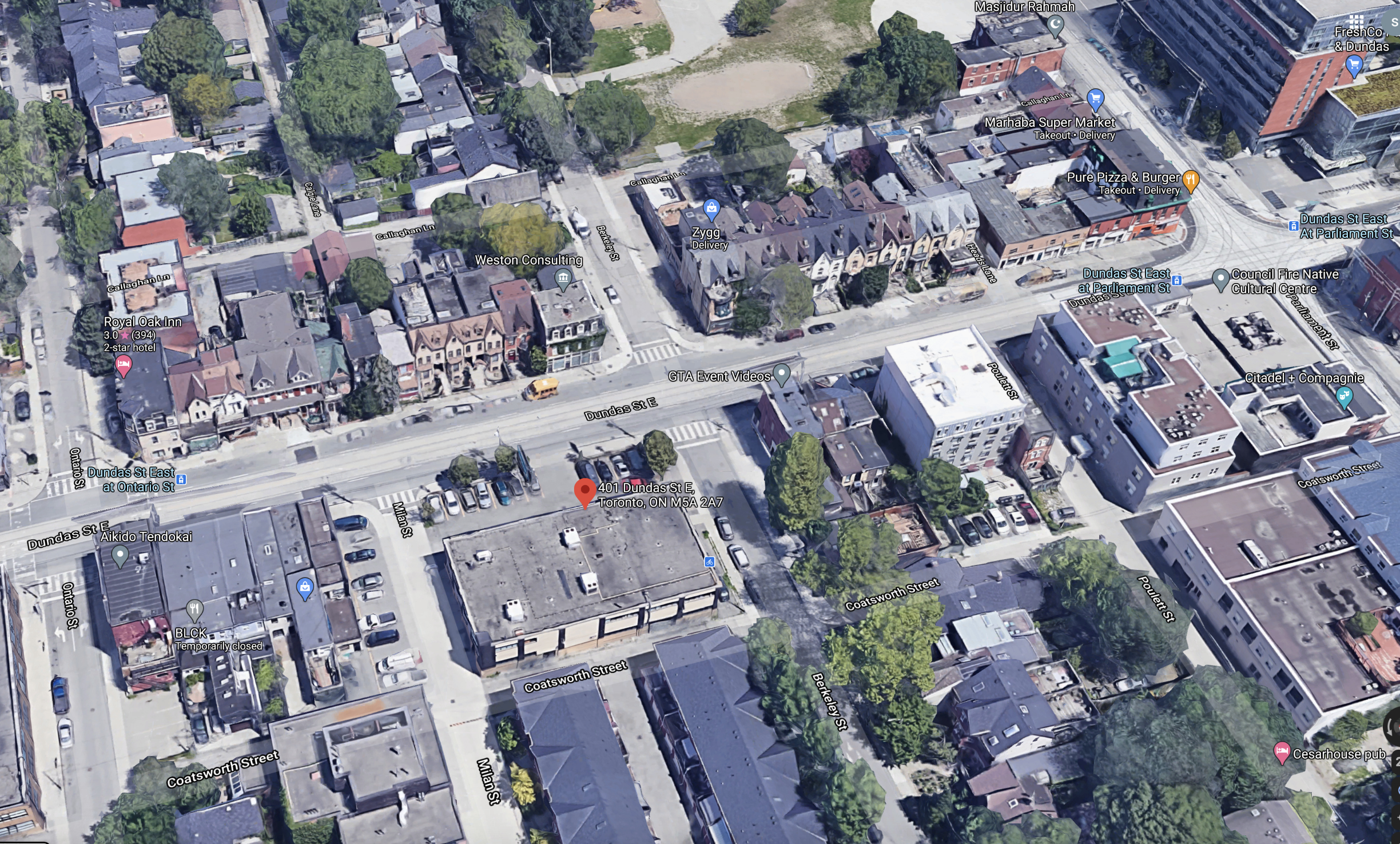 The proposed redevelopment, designed by BDP Quadrangle, consists of a 10-storey mixed-use condominium building, with 6,786 m² of total gross floor area (GFA) and a Floor Space Index (FSI) of 5.32 times the area of the lot. Ground level retail (298 m² in area) spans the entire frontage along Dundas, with the residential entrance tucked along the Milan Street frontage.

Access to loading, ground level bicycle storage, and the underground parking would be via the laneway at the rear, and away from the public realm. 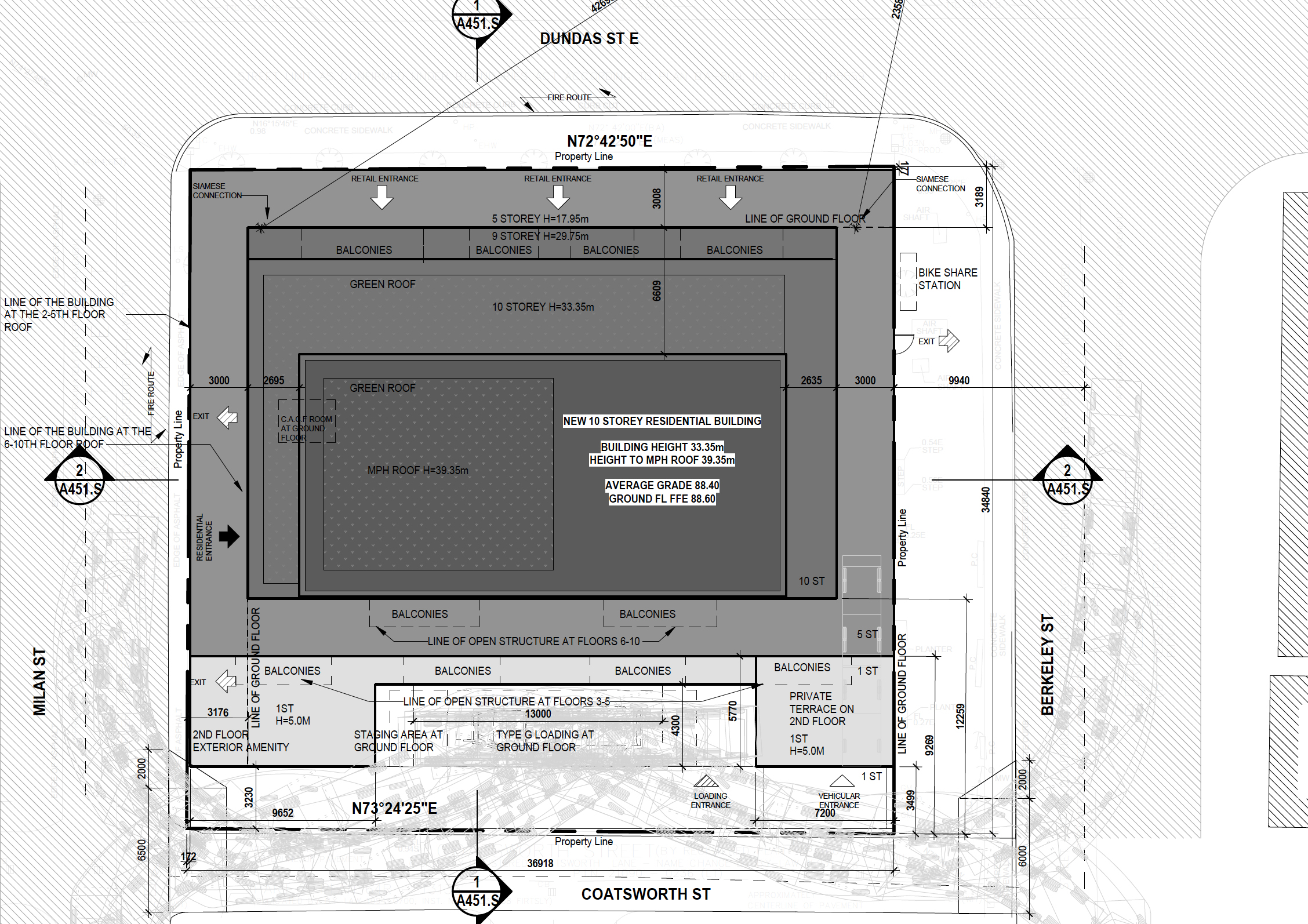 The building seeks to frame and define the street edge, providing a comfortable public realm and supporting the proposed retail spaces. The second level overhang along the Dundas Street and Milan Street frontages would provide at-grade weather protection for pedestrians and retail patrons.

The 33.3 metre-high building is designed with step backs of the upper floors in order to reduce building massing when viewed from adjacent streets and properties, to limit impacts on local sky views, and to tailor the fit and compatibility of this building with the existing and planned neighbourhood context.

As indicated in the section below, the south elevation is set back from the south property line in order to achieve a functional 7.5 metre-wide public lane, and to enable a rear loading and staging area. The 2nd to 5th floors are stepped back from the southern limit of the ground floor at the rear, and the 6th to 10th floors are stepped back a further 3 metres. 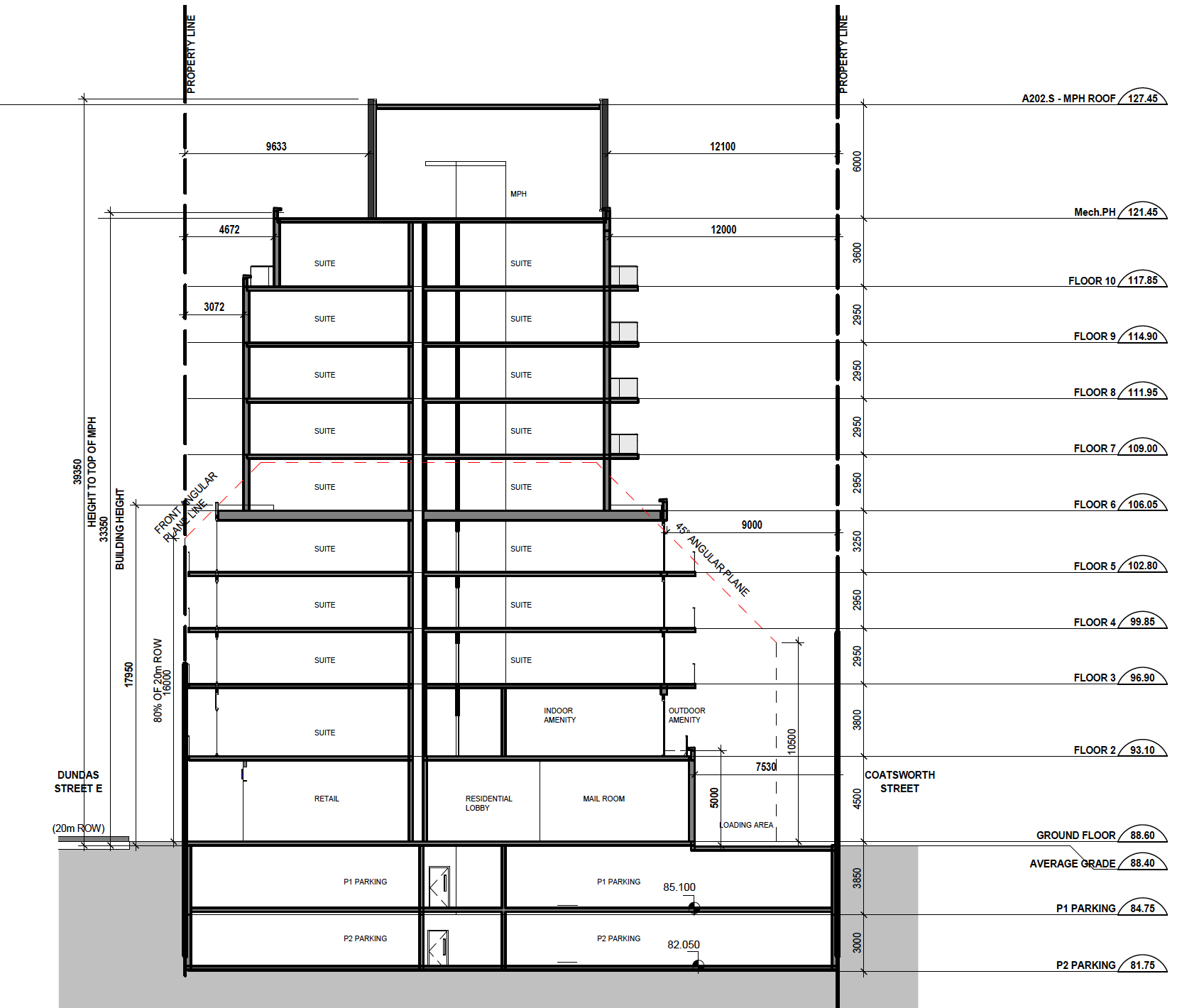 A total of 403 m² of residential amenity space is provided: 326m² indoor and 77m² outdoors, the latter contiguous with the 2nd level interior amenity. A small amount of indoor amenity space is located adjacent to the building lobby. 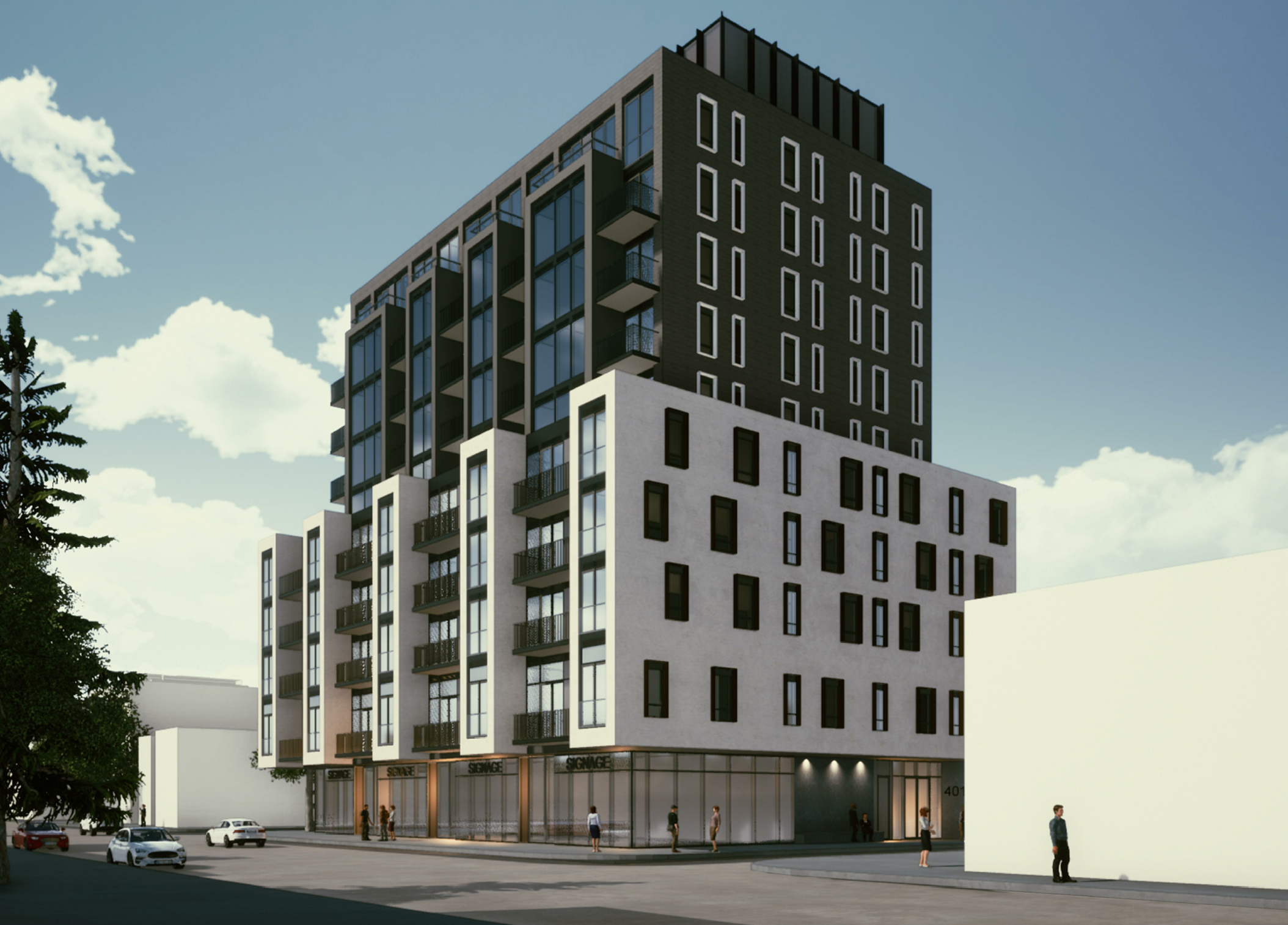