It was 30 years ago that construction was halted on the ill-fated original incarnation of the Bay Adelaide Centre in Toronto’s Financial District, its initial vision ended by a global recession that left a concrete stump on the site for years. The complex was restarted under new ownership and a new design in the 2000s. Now, the third and final phase of the office complex is progressing through its late stages of construction in the face of a pandemic that will pose economic ramifications that no-one completely understands yet. 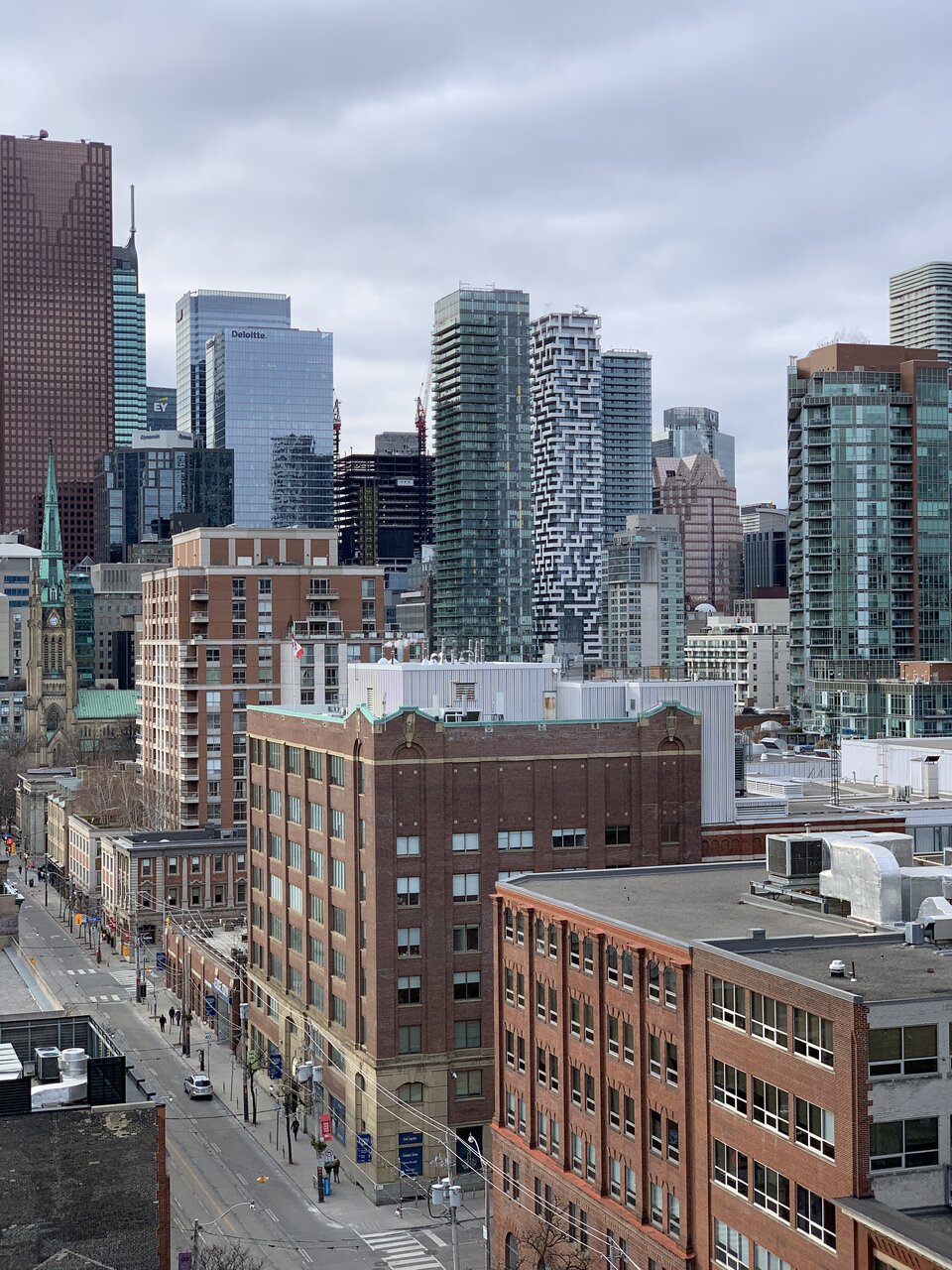 The third and final tower of Brookfield Property Partners‘ complex is fast approaching its final height of 32 storeys above Temperance Street across from the complex’s 51-storey, 2009-built West Tower and 44-storey, 2016-built East Tower. The comparatively shorter final tower—restricted in height so that it adds no new shadow on nearby Nathan Phillips Square—is to be known as Scotiabank North Tower at Bay Adelaide Centre in recognition of the banking giant’s lease of over half of the building, taking up 420,000 ft² of the 810,344 ft² tower. 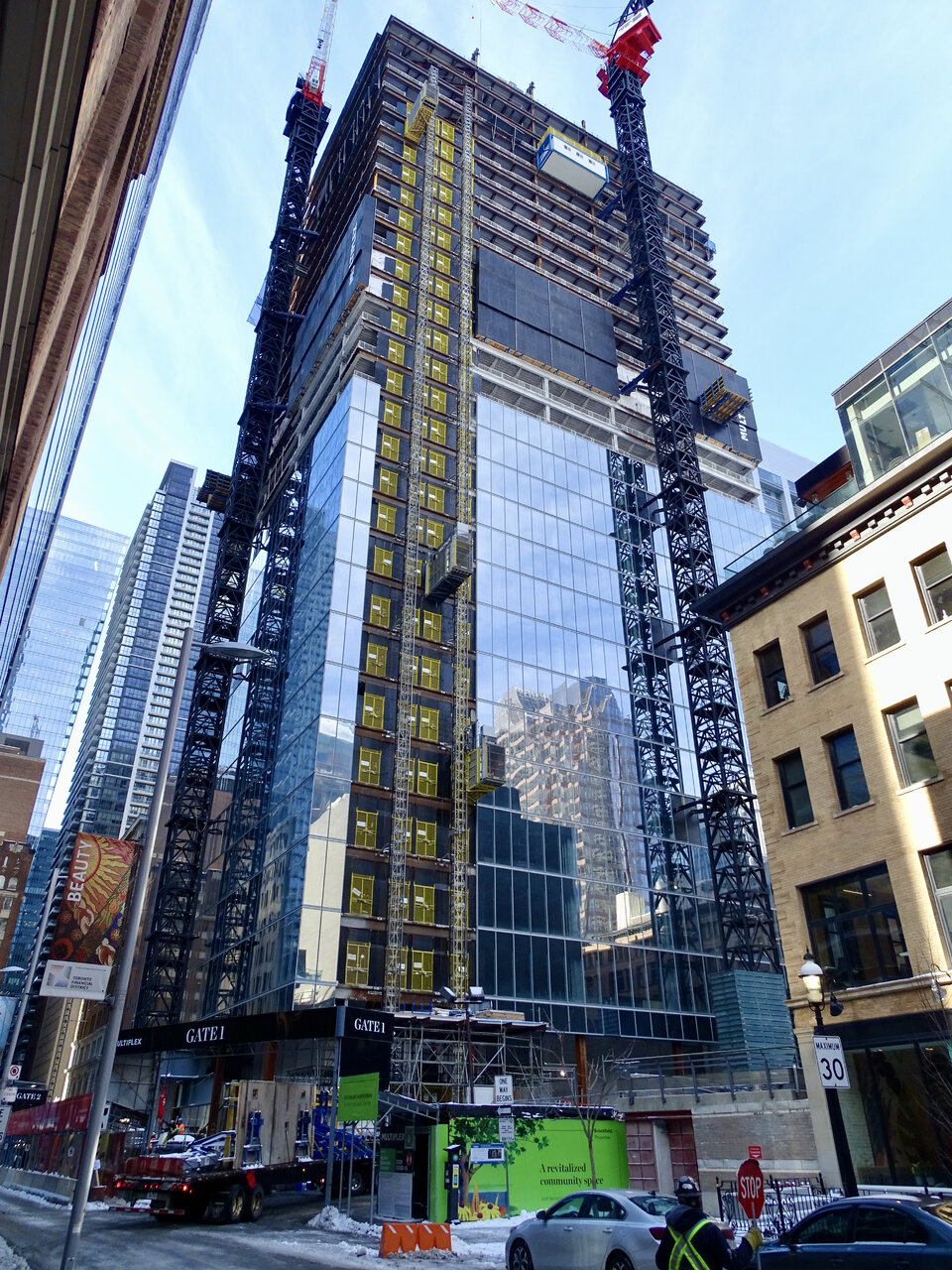 Work on the KPMB Architects and Adamson Associates Architects-designed tower started in late 2018, and over two years later, the building is quickly closing in on a final height of 140.2 metres. We last checked in on construction in early October, when the assembly of the building’s structural steel skeleton had risen as high as the 17th floor, with the central concrete elevator core extending several levels above. The concrete elevator core has since topped out above the 32nd floor. Steel assembly is rapidly catching up, and has since advanced to the 30th floor, leaving just two office floors and mechanical to form before steel assembly tops out as well. 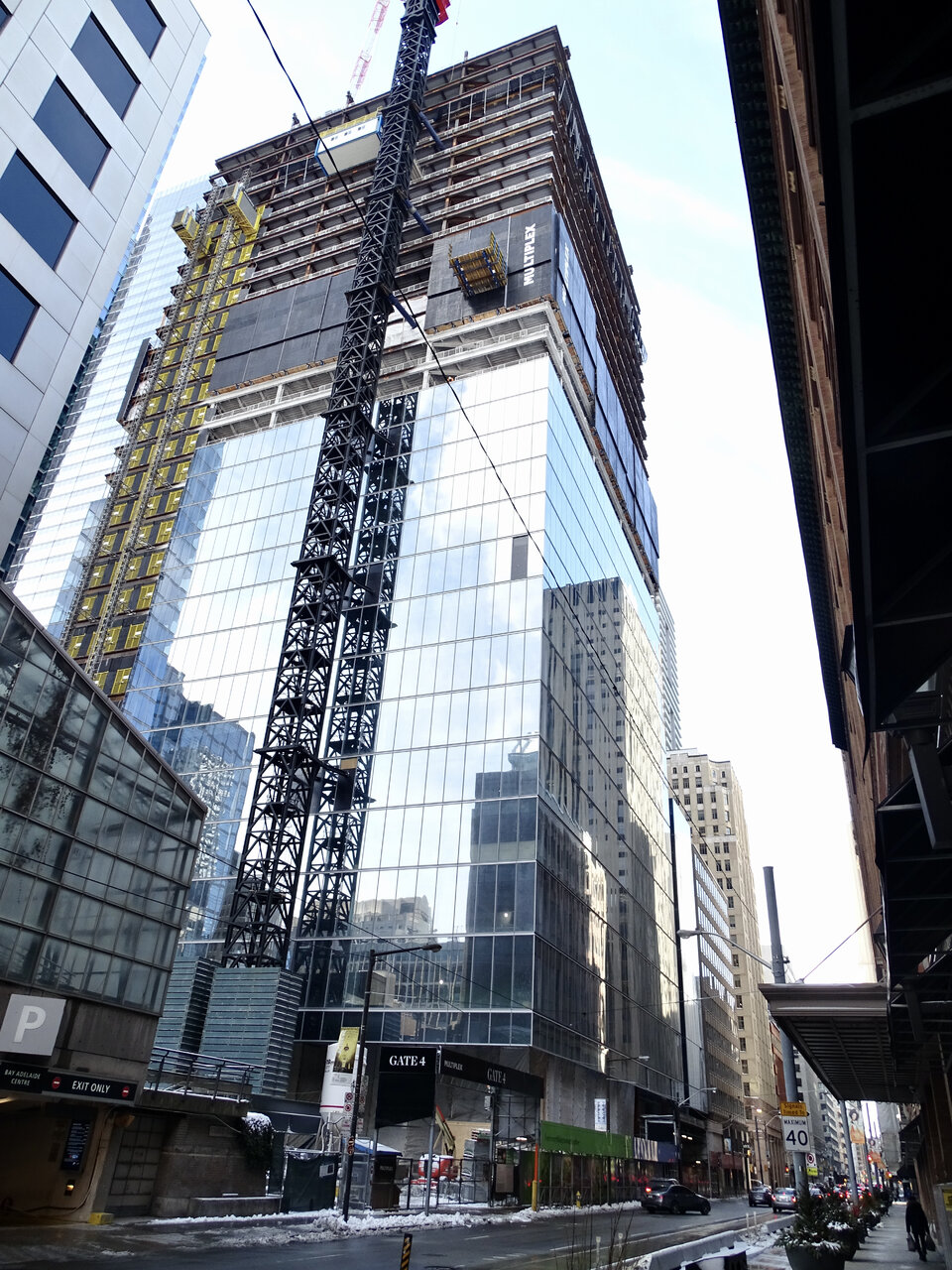 At the time of our last update, cladding installation had just begun above the ground floor. Like the east and west towers that set the complex’s aesthetic in place, the final tower takes on a minimalist look defined by a skin of reflective light blue-tinted curtainwall glazing, now installed as high as the 13th floor. 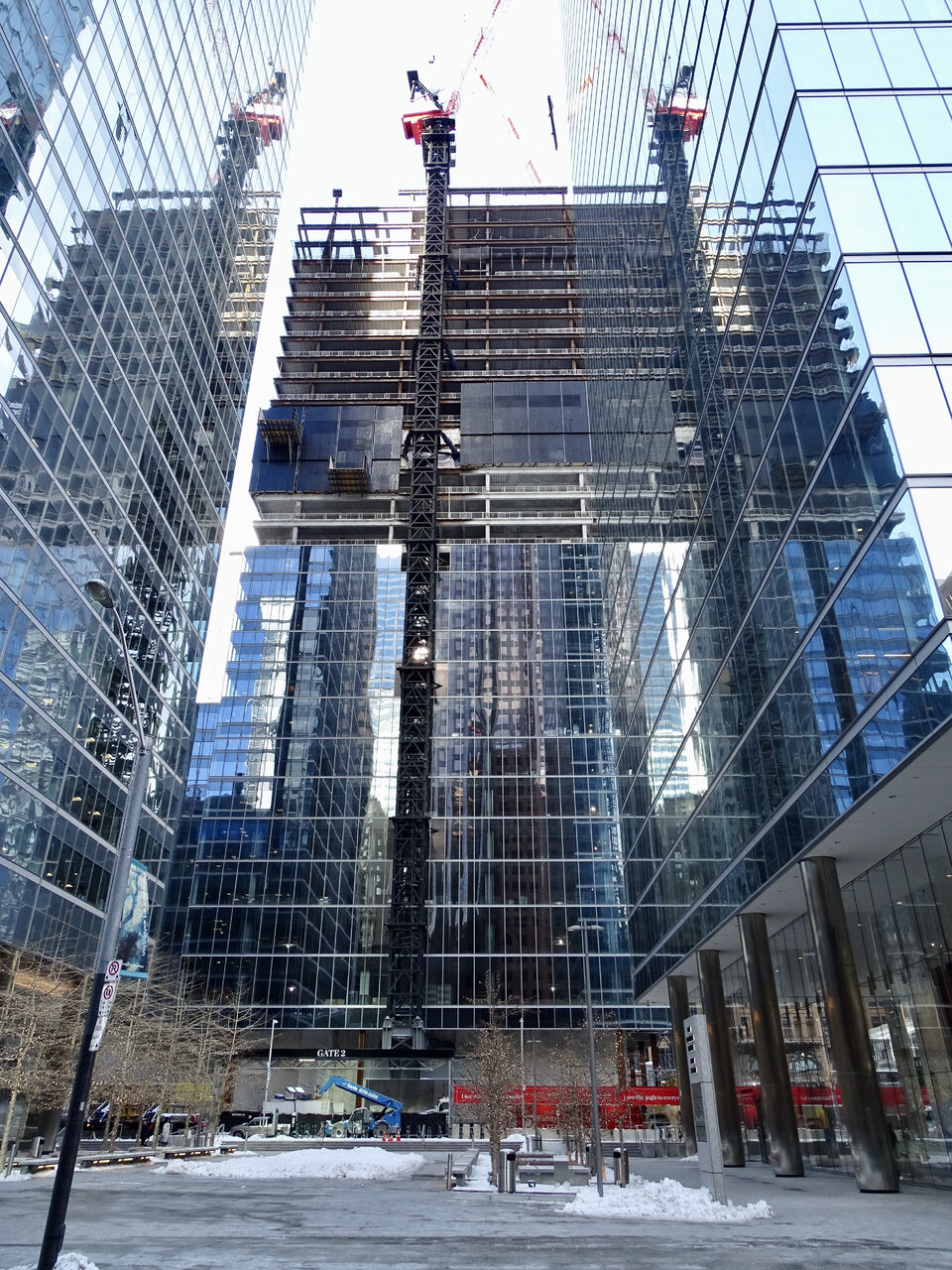 The building is targeting LEED Platinum Core & Shell upon completion, and will be connected with the Enwave deep water cooling system, among other green features. 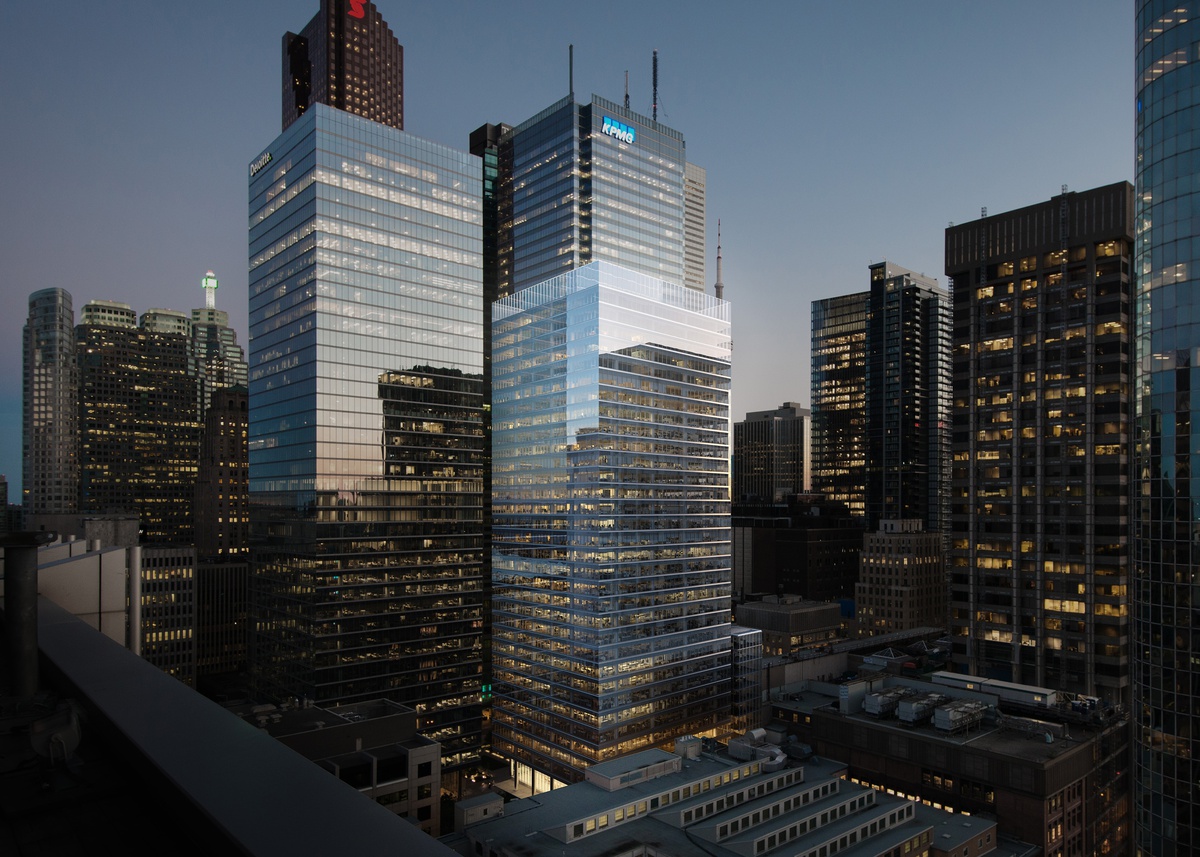