Seven Buildings Progressing at Site of ‘The Well’

Toronto’s largest active construction project is reshaping nearly a full city block extending west from Spadina Avenue between Front and Wellington streets. The Well features a project team of several developers and architects working together to make the colossal mixed-use development a reality, with a 36-storey office tower along with residential rental and condominium buildings of 14, 16, 16, 22, 39, and 46 storeys now rising into the Downtown skyline. 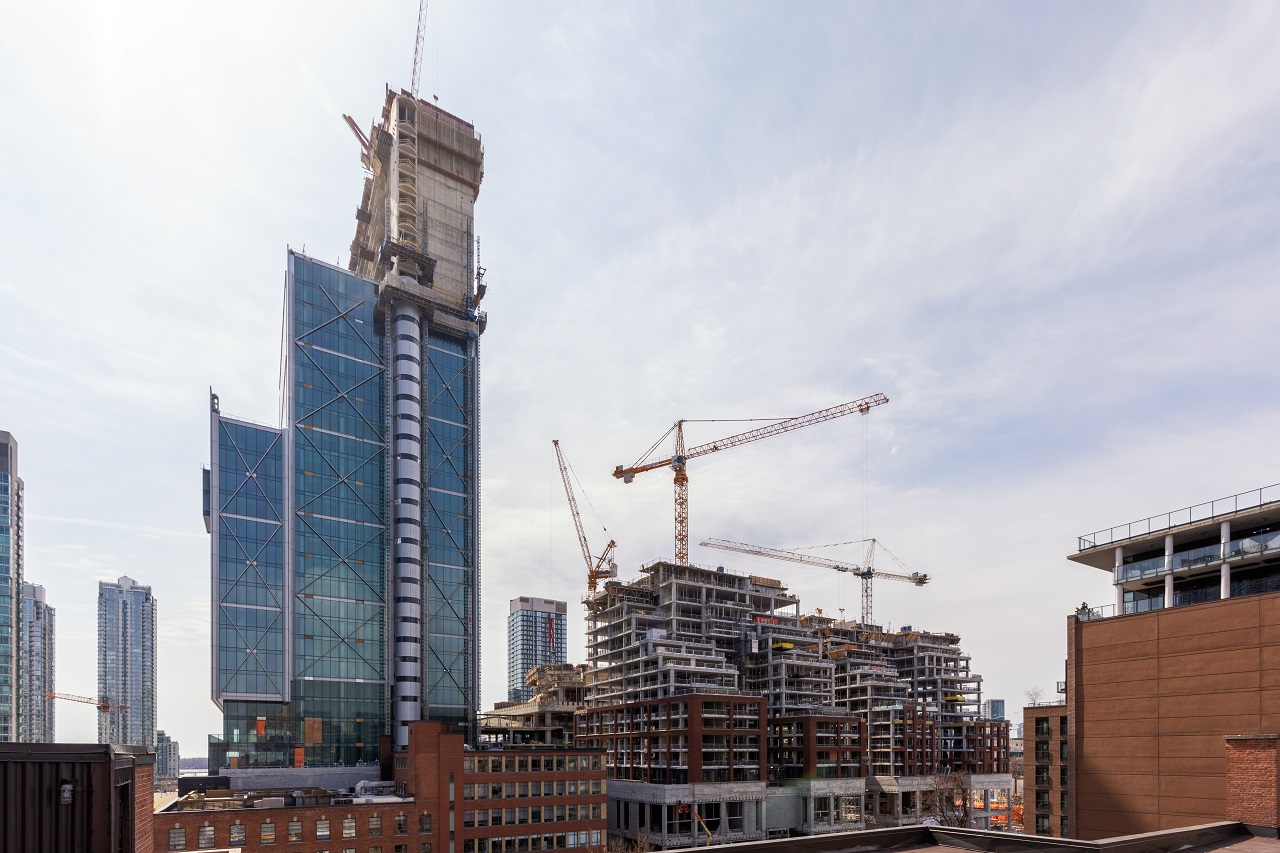 Looking southwest to The Well, image by Jack Landau

We’ve been keeping a close eye on the project’s construction since work began in early 2018, most recently catching up with construction earlier this year with a January update. Much has changed in just two and a half months, with all elements of the complex recording progress. 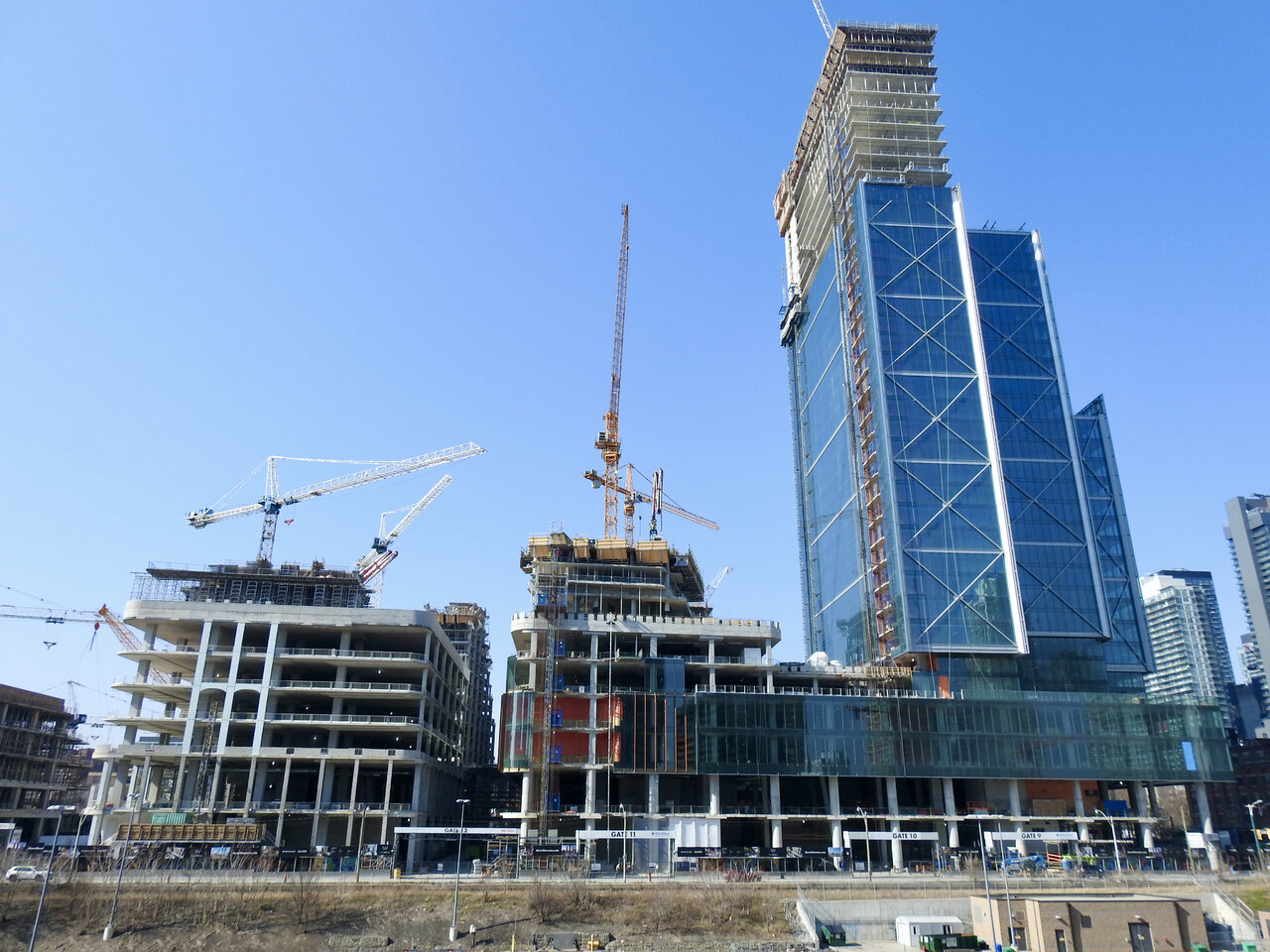 Throughout construction, the complex’s tallest building, a 36-storey, Hariri Pontarini Architects-designed office tower being built for developers Allied REIT and RioCan REIT, has been far ahead of the shorter buildings to the west. The last of the office floors were beginning to be poured high above the corner of Front and Spadina at the time of our last update in January, a task which continues as the tower closes in on its final height of just over 174 metres. Cladding installation has also made noticeable progress, having risen from the 24th floor to the 27th floor, surpassing another tower stepback in the process. As cladding advances higher, more of the tower’s distinctive set of decorative cross-braces have appeared, mounted to the blue-green curtainwall glazing and framed by vertical corner fins. 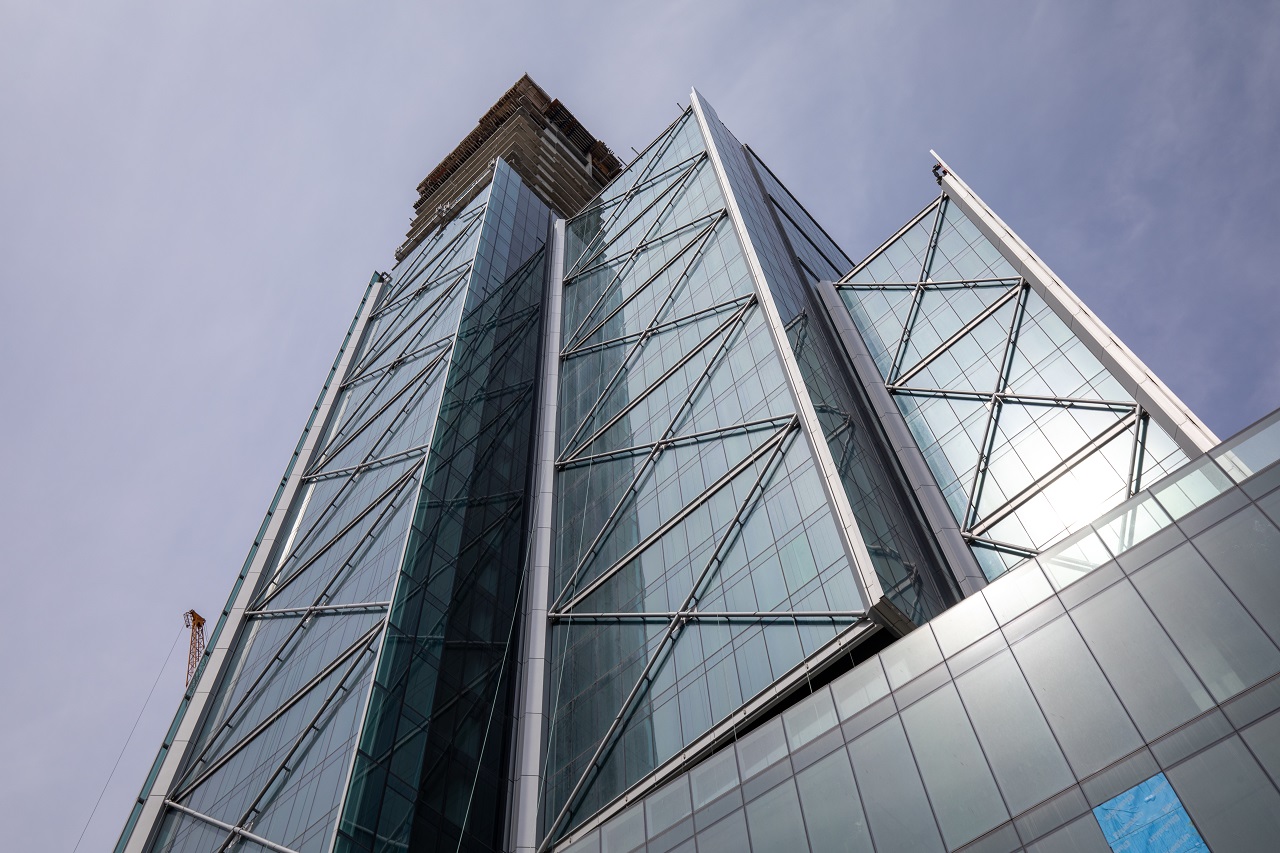 Office tower at The Well, image by Jack Landau

At the base of the tower, facing the corner of Spadina and Front a grand open-air entrance has emerged, framed by two curved walls of glass—still coming together —that will lead pedestrians into the retail galleria that carves across the site. 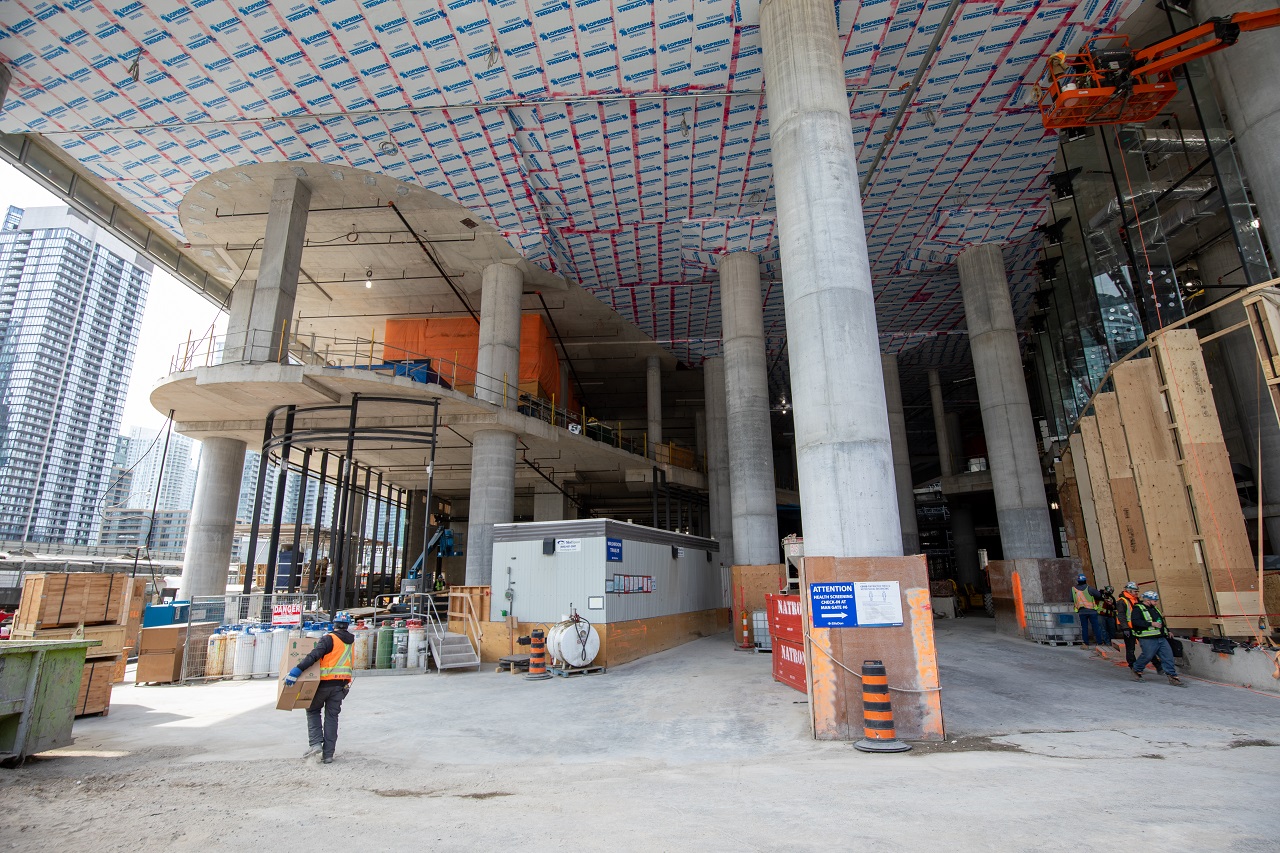 Front-Spadina entrance to The Well, image by Jack Landau

A trio of architects—Alliance-designed residential towers will line Front Street west of the office tower. The easternmost of the trio is also the tallest, a 46-storey RioCan Living and Woodbourne Canada Management rental tower connected sharing a podium with the office building. The podium levels are now complete, and the first three tower floors have sprouted above. 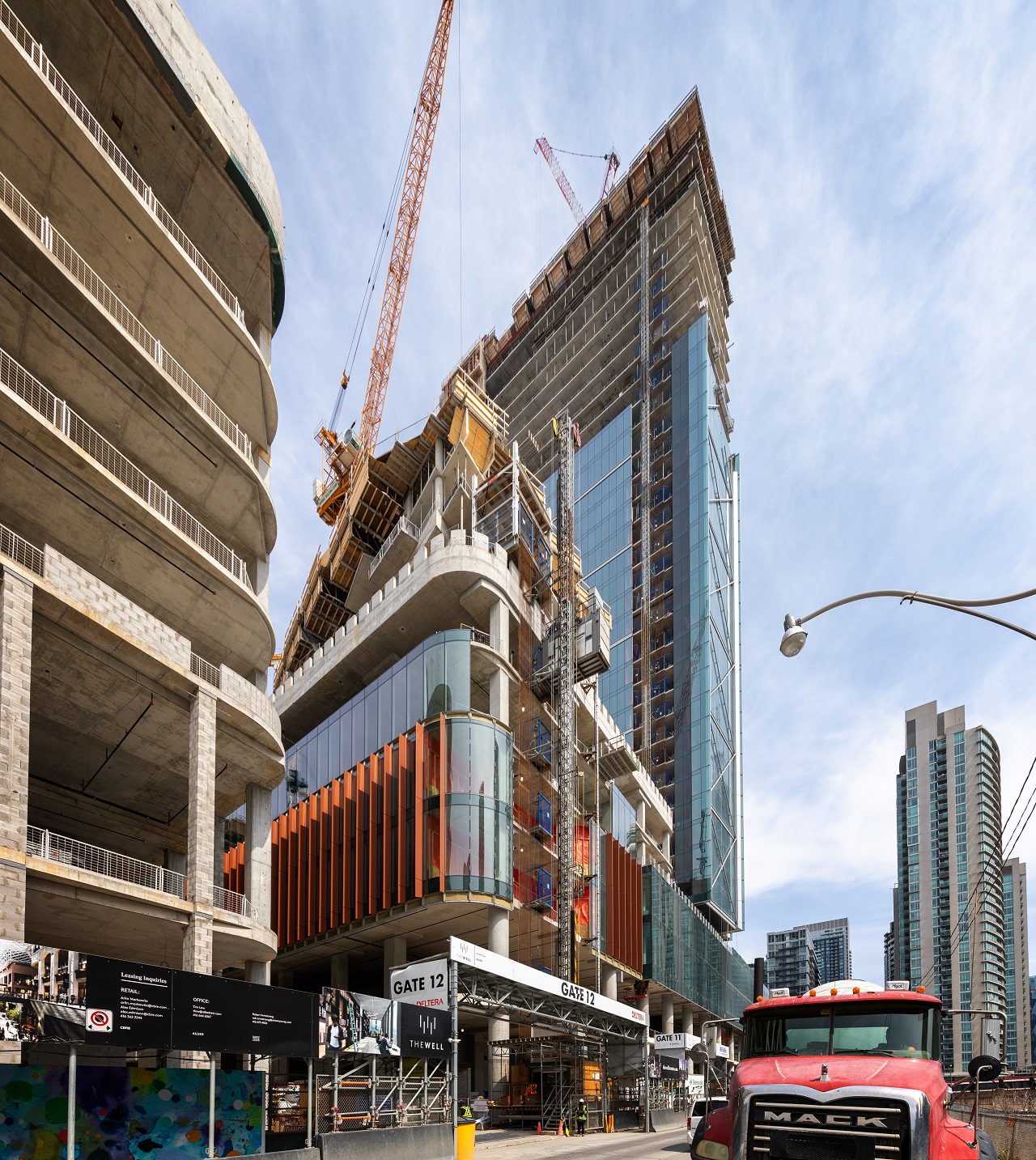 At the time of our last update, curtainwall cladding had begun to enclose the podium levels, with this glazing now being lined with terra cotta-hued vertical fins. 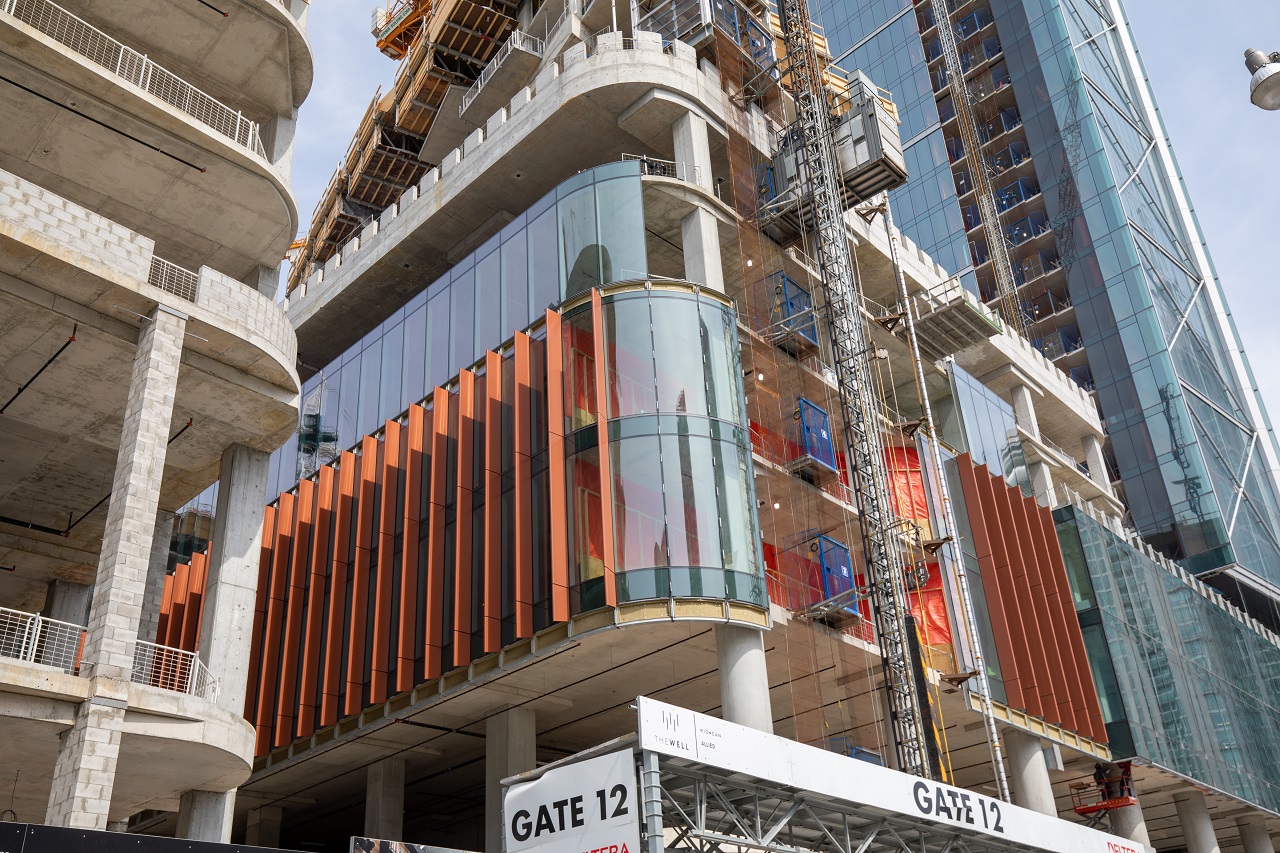 Fins at base of The Well, image by Jack Landau

East of the 46-storey tower, a pair of 22 and 38-storey Tridel condo towers are growing more prominent over Front Street as towers begin to rise above their rounded podiums. At the base of the 38-storey tower, framing is in place that indicates the imminent installation of the building’s arched masonry finishes. 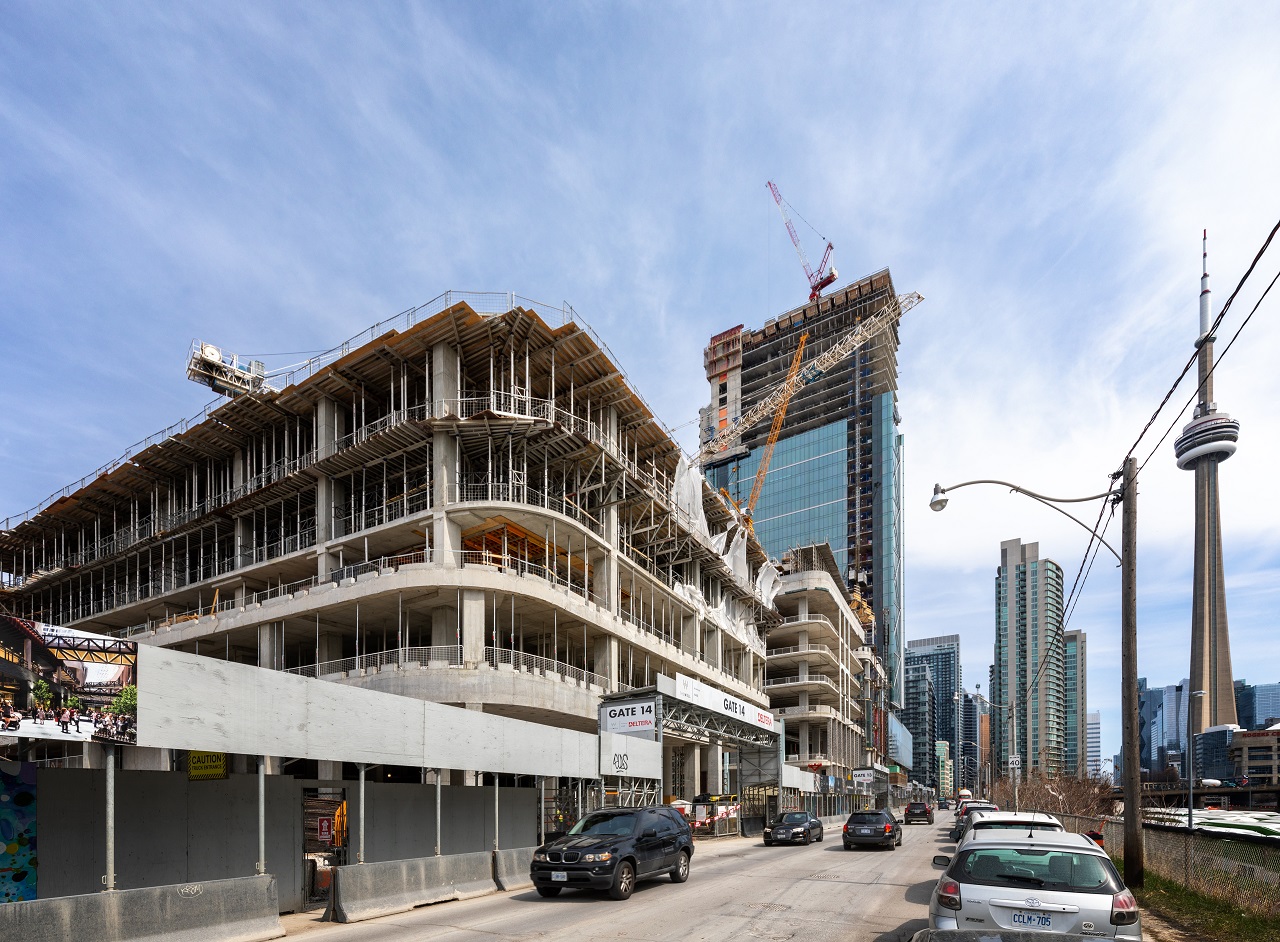 Looking east along Front Street at The Well, image by Jack Landau

North of the Front Street buildings, a trio of Wallman Architects-designed residential buildings are under construction along Wellington Street West. Two of these are to be 16-storey rentals for RioCan Living and Woodbourne, with the third to be a 14-storey Tridel condo tower. At the time of our January update, these buildings stood at heights of 12, 9, and 2 storeys. While forming has only made slight progress in the time since, cladding installation has advanced considerably, better defining the buildings’ stepped massings. 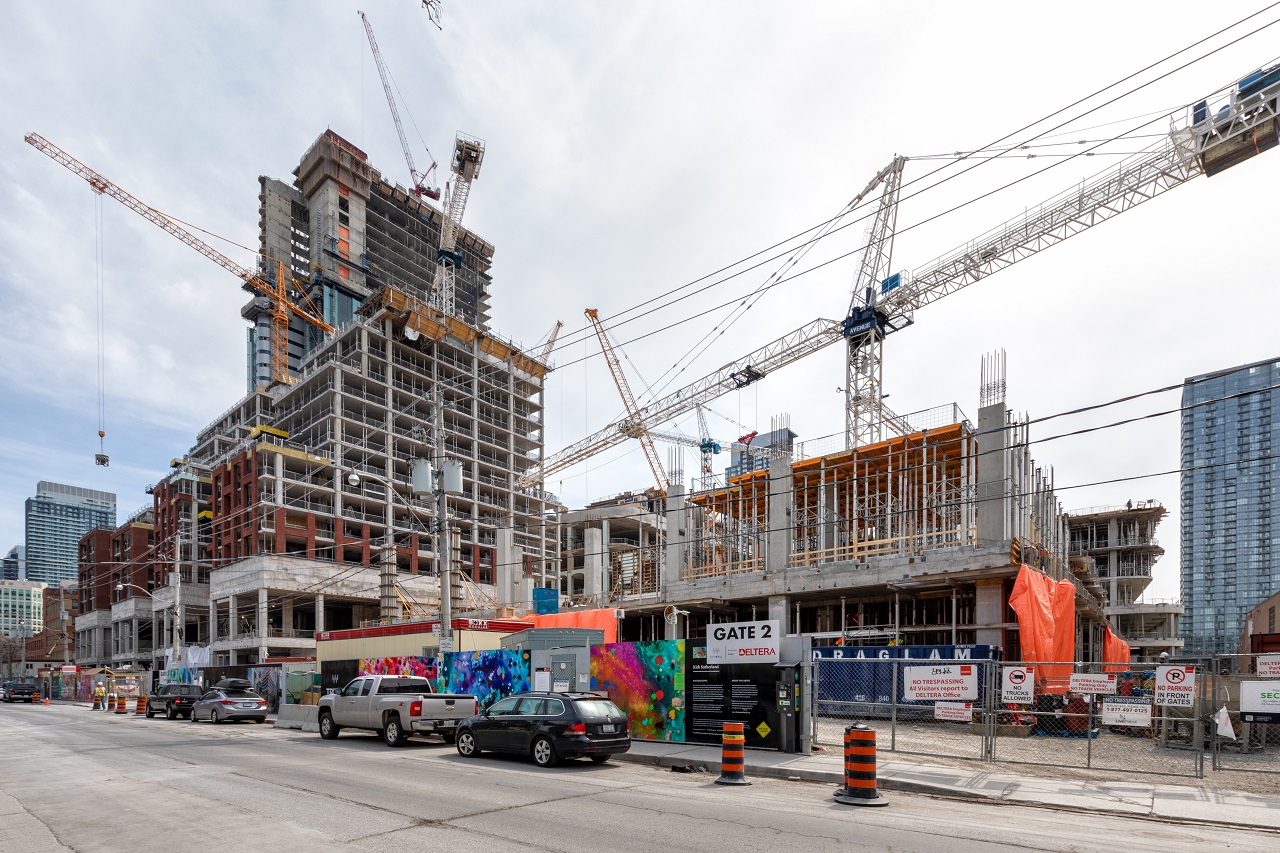 Looking southeast on Wellington Street to The Well, image by Jack Landau

Red brick panels had just begun to appear when we last checked in, in January, and they now cover large sections of the buildings. The east building features a more traditional pattern of brick framing, while the central building features a staggered pattern that puts a modern spin on Wellington West’s collection of heritage architecture. Below, the first window wall glazing can now be seen above the tower base. 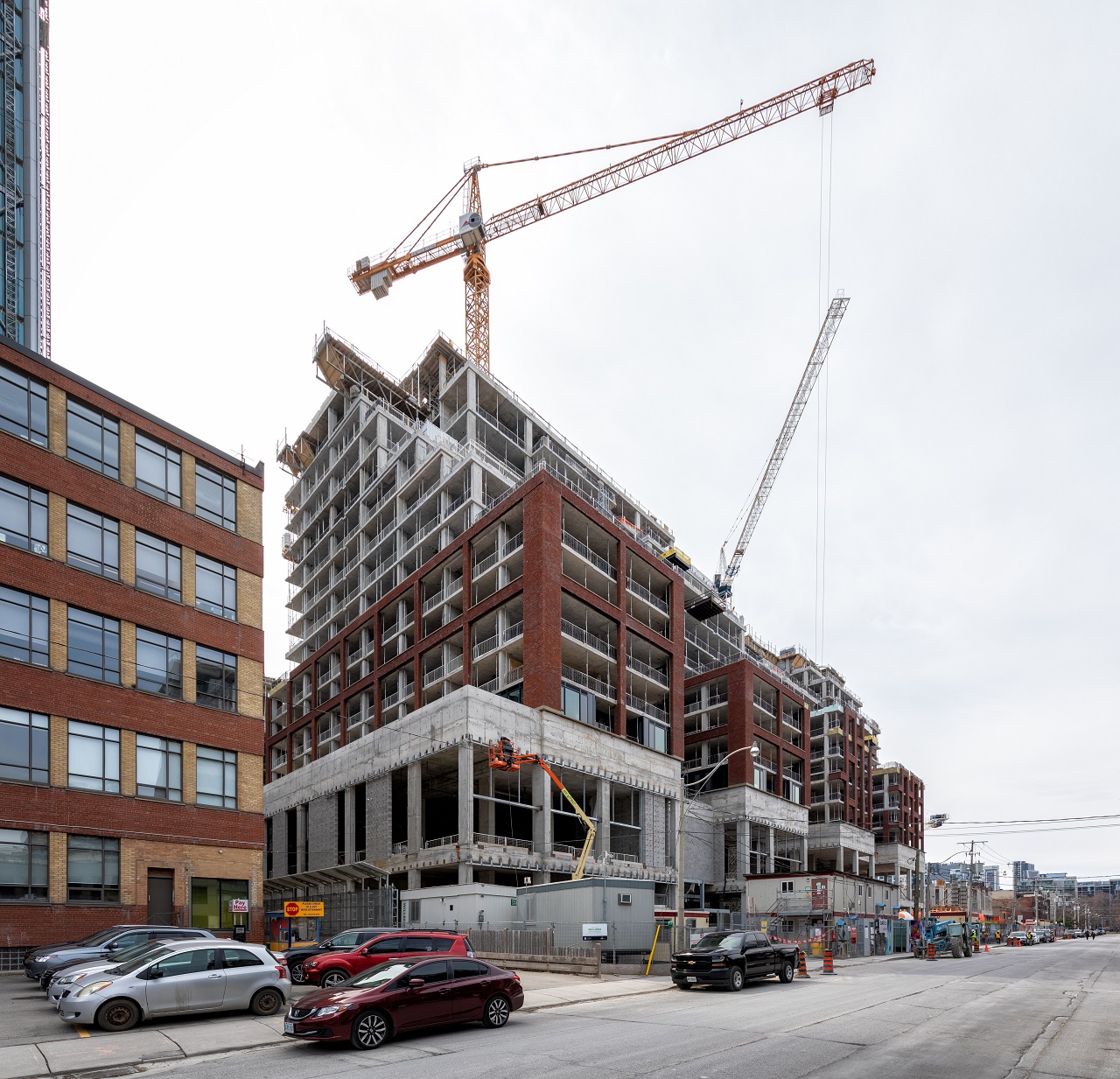 Looking southwest on Wellington Street to The Well, image by Jack Landau

A BDP-designed multi-level retail galleria carves and curves through the heart of complex, to be lined by retail and restaurant spaces, many of which have already been leased. The sheltered between them is now coming together with the recent arrival of an undulating steel canopy, to be covered in glazing. 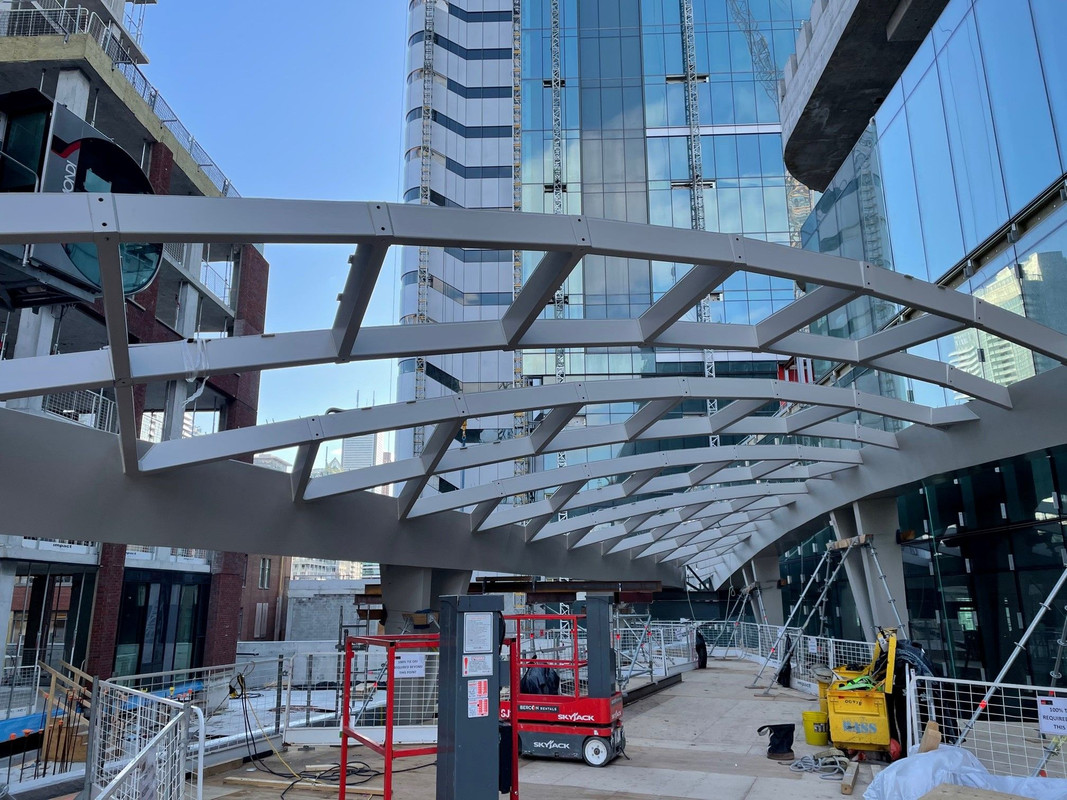 Shelter structure at The Well, image via Knightsbridge Development Corporation/LinkedIn

At the far west end of the site, a park leading east from Draper Street—with branches leading out to Front and Wellington streets—will combine with the grand entrance at the site’s southeast corner to form a network of pedestrian connections. 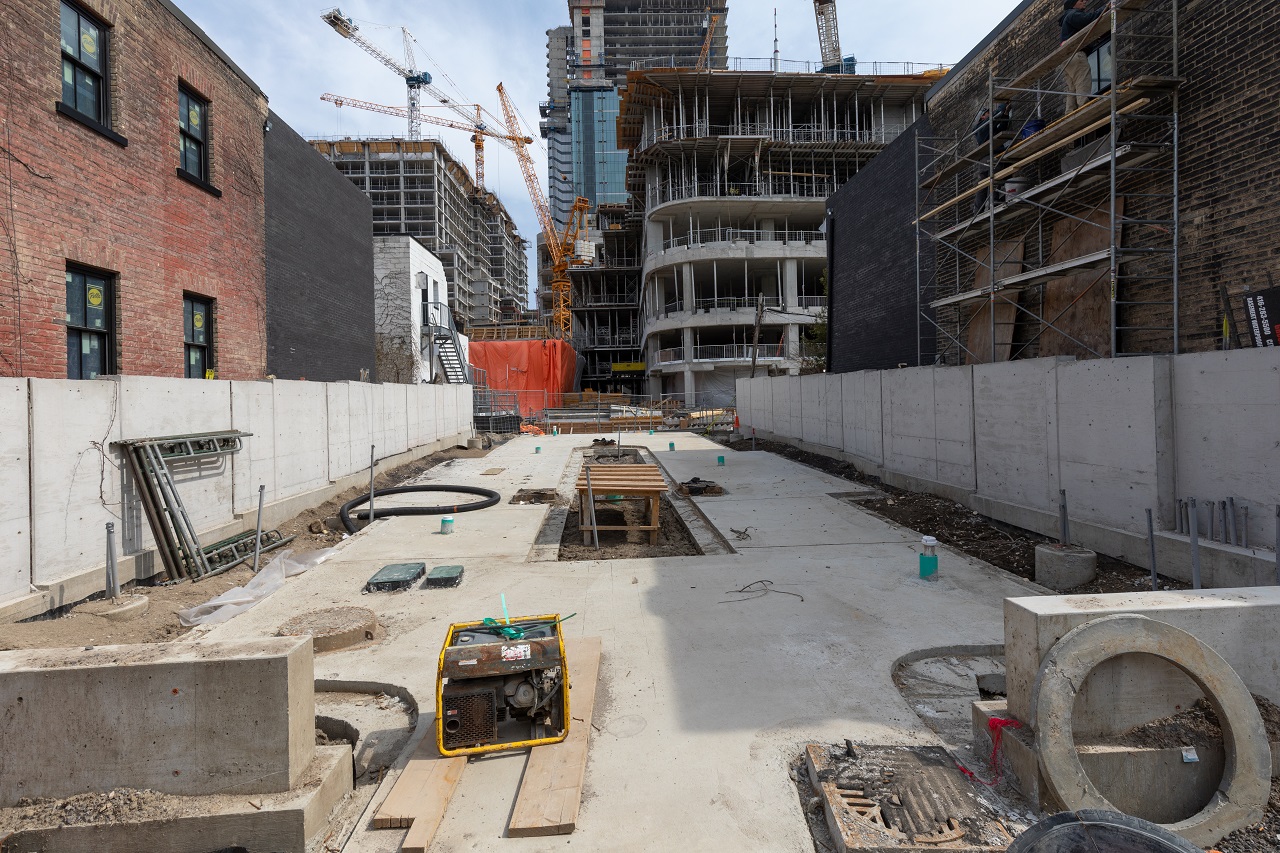 Draper Street park at The Well, image by Jack Landau