The chart below presents data on the average monthly asking rent for GTA rental listings (all property types: basement apartments, rental apartments, condo apartments, townhouses and single-family homes) from October 2019 to December 2020 based on listings data on TorontoRentals.com. The average rent is shown via the coin symbols, with the shade of red representing the median rent level. 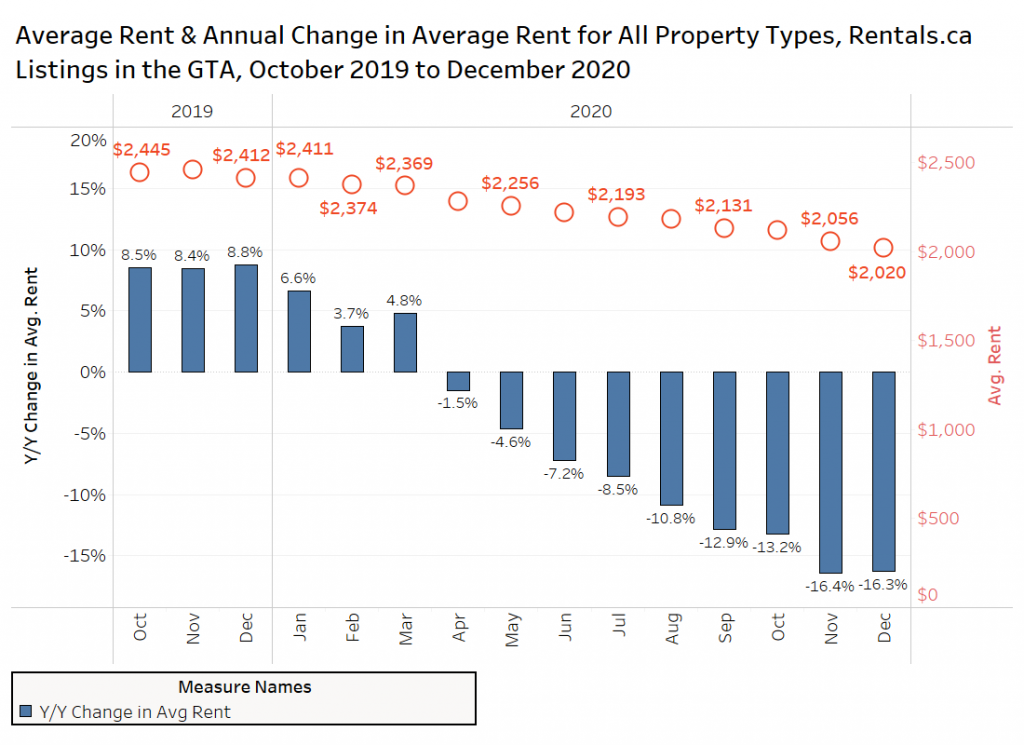 The average rent by bedroom type in the GTA for all property types in the fourth quarter of 2018, 2019 and 2020 is shown in the chart below. Five- and six-bedroom units have been removed from the chart, as the small sample sizes lead to monthly volatility.

Average Asking Rents for One-Bedroom Units Down about 14% annually 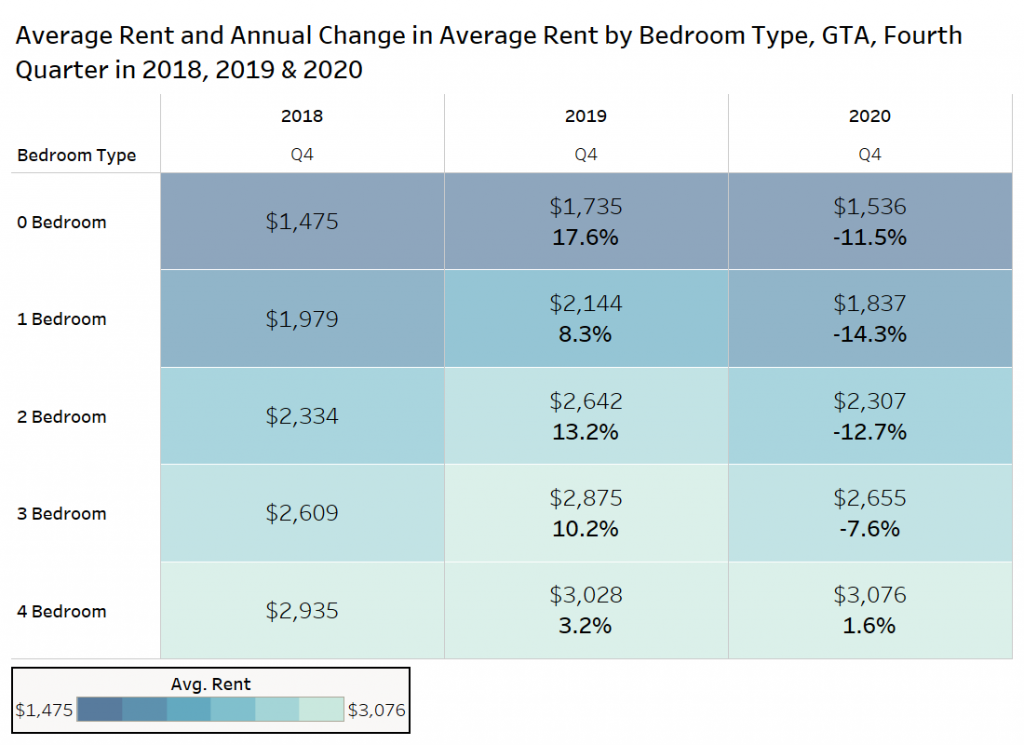 Four-bedroom units, which are primarily suburban single-family or townhouses, was the only category to experience rent growth, and showed a nominal, albeit positive, year-over-year increase of 1.6%. The sample size is not large in comparison to the other bedroom types, and the results are volatile on a monthly basis as the composition of the sample changes rapidly (based on location, lot size and unit size).

It is clear from the data and anecdotal evidence that tenants are seeking out more space while working from home. With students staying home in early 2021, expect that trend to continue as parents with children look for more space to conduct virtual learning. With rents declining as they have, tenants in a two-bedroom unit can almost afford a three-bedroom unit at the same rent level they paid for their two-bedroom unit last year.

The next chart presents GTA data on the average rent and average rent per square foot for single-family homes, condominium apartments, and rental apartments by month in the fourth quarters of 2018, 2019 and 2020 via TorontoRentals.com listings data.

GTA Condo Rents are Down 18% Annually 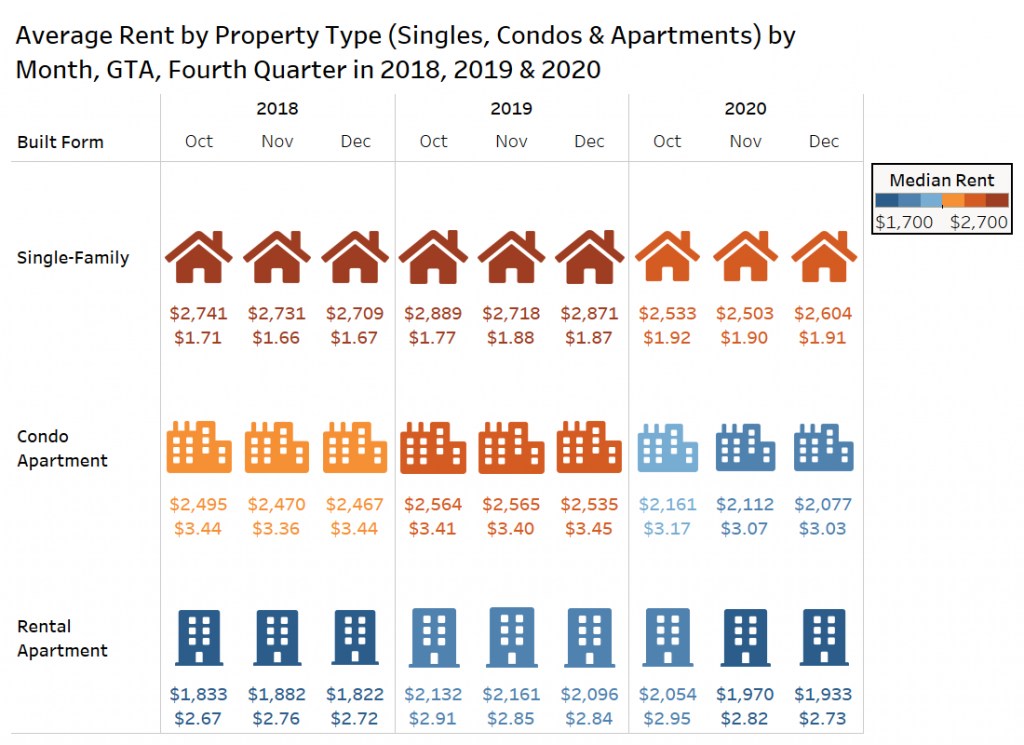 Data on the average rent per square foot and annual change in rent per square foot for condominium and rental apartments by rounded unit size is presented in the chart below. Suites from 250 square feet (sf) to 1,549 sf are rounded to the nearest hundred to examine the asking rents in 2019 and 2020. The colour of the markers indicates the average monthly rent, and the size of the marker reflects the number of listings for that category. 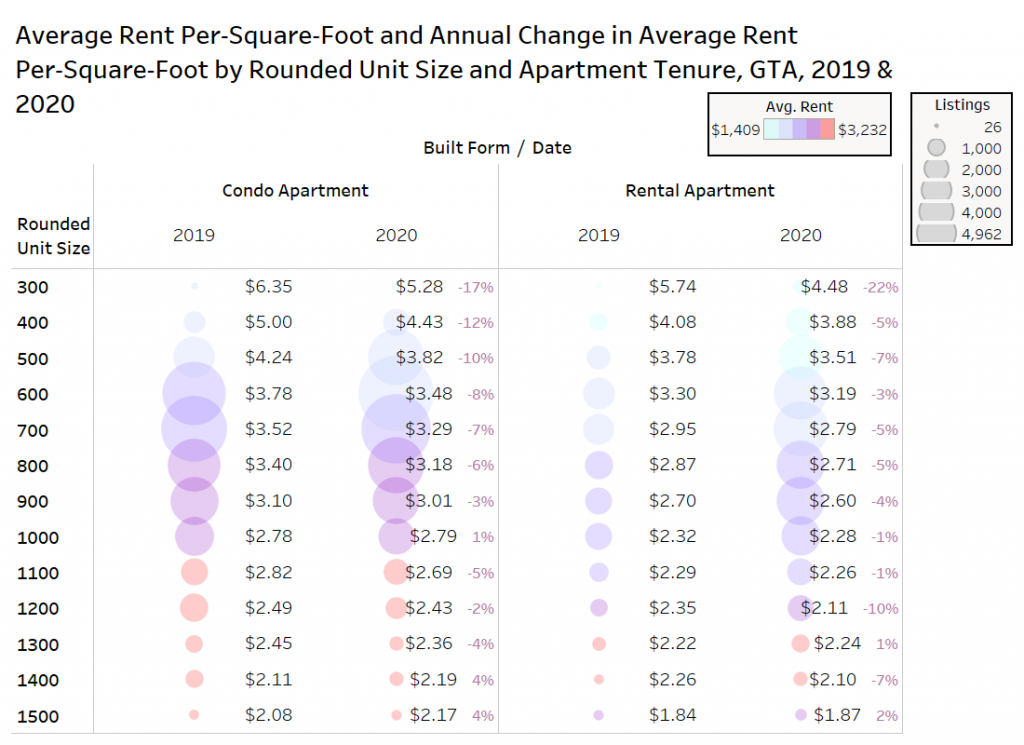 With people working from home, small units have fallen out of favour, and with many of these units in the downtown area and used by students and young professionals just starting out, the pool of available tenants has shrunk substantially.

With record completions scheduled for 2021, there should be even more of these micro suites hitting the rental market, as they were popular with new condo investors looking to buy the cheapest units in these projects.

Average Annual Rent Down 19% in Toronto, Brampton Up By 11%

The chart below presents data on the average rent for condominium rentals and apartments in select GTA municipalities in December 2020 (Toronto is broken up into its former municipalities, prior to amalgamation). 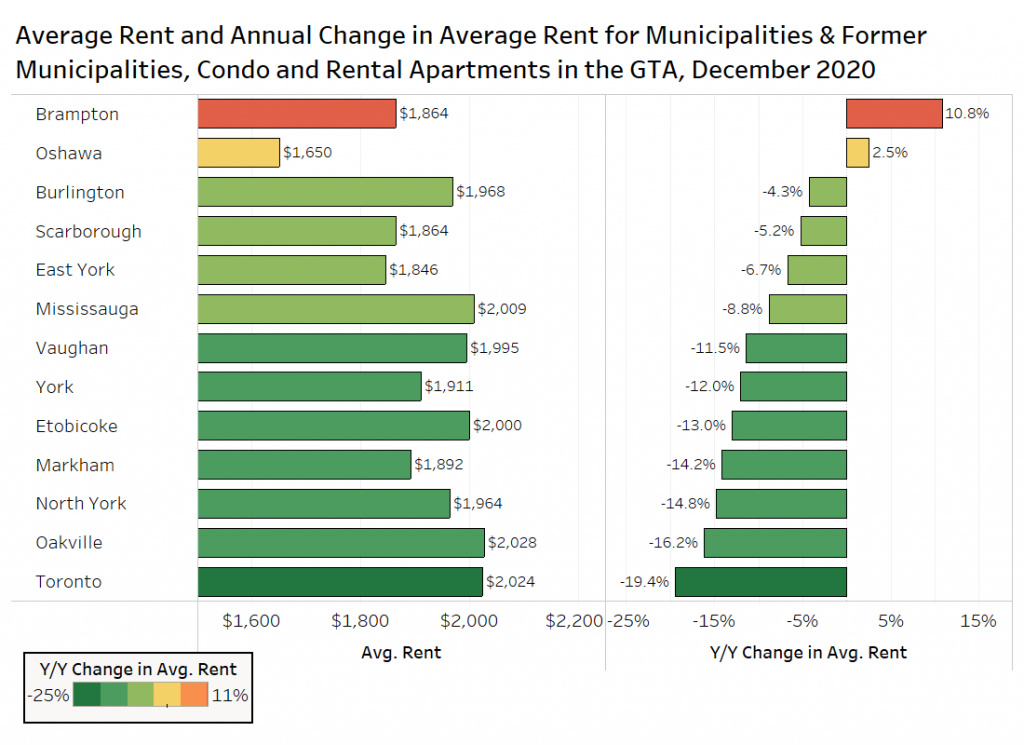 Brampton, a municipality currently in the news for high COVID-19 rates, experienced a 10.8% increase in average rent, the only municipality in the sample with an increase of over 3%, bringing the monthly rate to $1,864, a rate equivalent to Scarborough. Brampton rental apartments increased by 6.5% annually, while townhouse rentals increased by 10.1% annually. Part of the rise can be attributed to a change in the composition of listings, with more townhouses and condo apartments compared to 2019.

Oshawa, the only other municipality with an increase in year-over-year average rent had the most affordable suites at $1,650 per month. Outside these two markets, the suburbs continue to experience notable rent drops, with the “905” municipalities of Richmond Hill, Vaughan, Markham and Oakville all experiencing double digit decreases ranging from 11.5% in Vaughan to 16.2% in Oakville.

The annual change in average rent in pre-amalgamation Toronto declined 19.4% in December of 2020, with average rent at $2,024. The following section will zoom in on the former city of Toronto in greater detail.

Data on the average rent for condo and rental apartments in the former city of Toronto from December 2018 to December 2020 is visualized in the next chart, with all buildings shown in the top panel, and condo buildings completed over the past five years in the bottom panel. 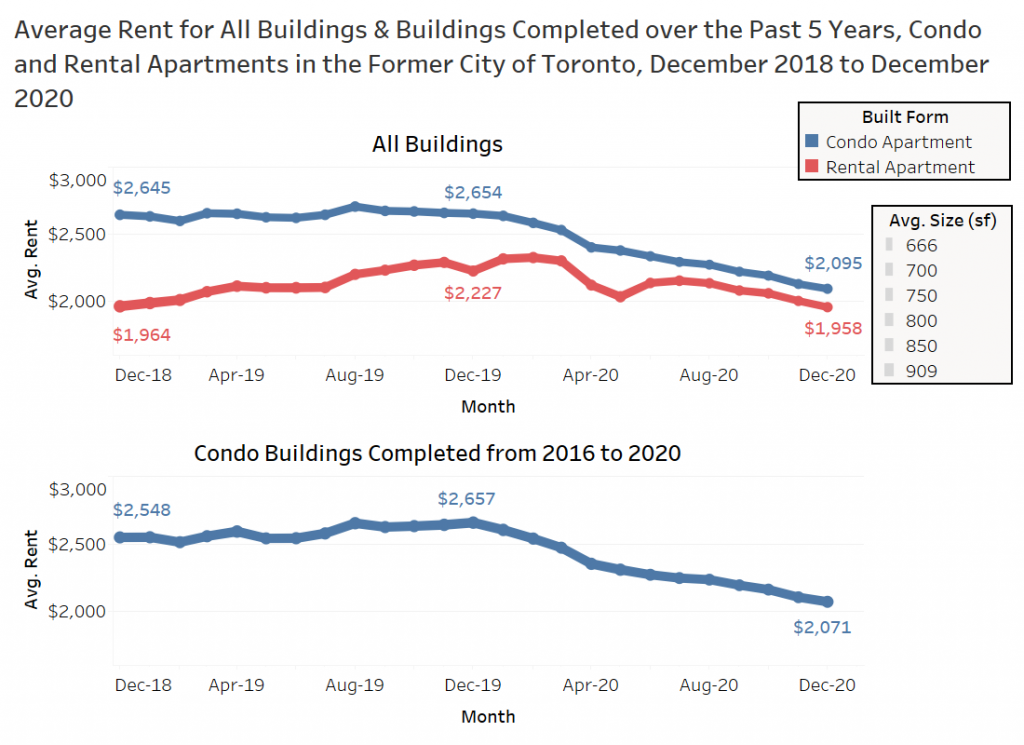 In 2019, the median rental rate per square foot for condominium apartments for rent in the GTA was flat at $3.43 psf (refer to the chart below). The same stagnant rent levels were experienced in the city of Toronto at about $3.56 psf, and downtown Toronto at $3.87 psf in 2019. 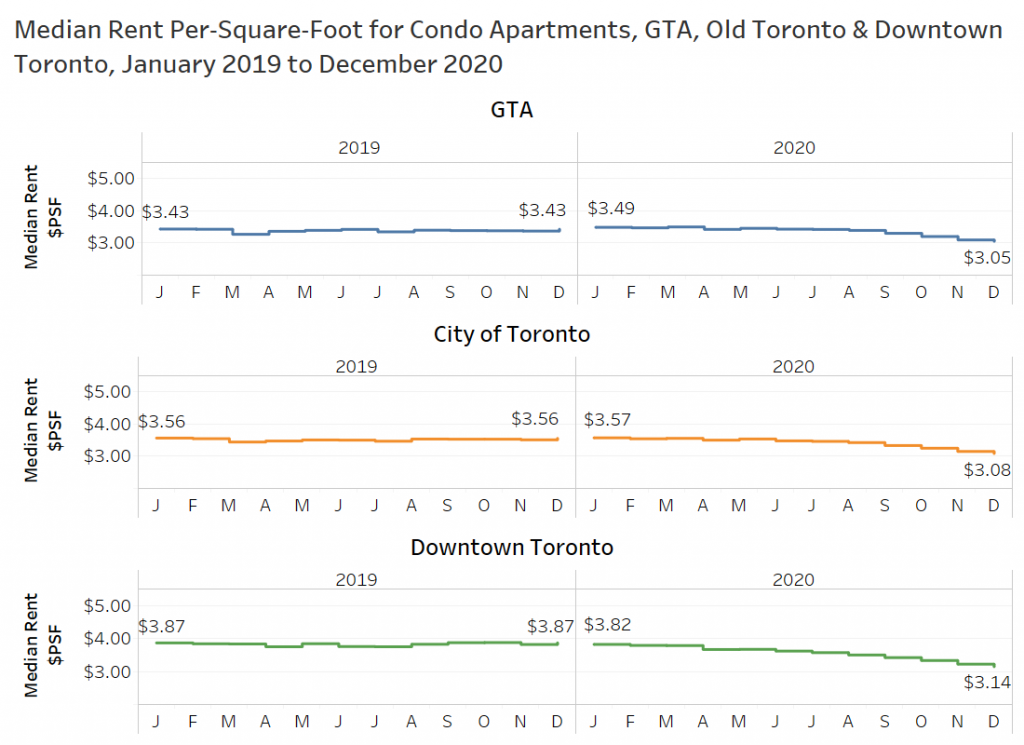 The downtown or central Toronto rent premium has nearly evaporated completely. In December 2019, downtown Toronto was commanding a premium of about 13% over the GTA overall, in December 2020 that premium had shrunk to just 2.5%.

The map below looks at the change in average rent by postal code for condominium apartments in 2020 versus 2019. The larger the circle, the higher the growth.

Most of the postal codes in the downtown core declined by double-digits, with the most active area, M5V (King West, Entertainment District), experiencing a 12% drop. The M4S postal code that includes Davisville and the southeast quadrant of Yonge and Eglinton declined by 10% annually, while M4P to the north declined by 7% annually.

Two east end postal codes saw rents increase in 2020 (M4C and M4L), but that is likely due to new completions pulling the average up, where the majority of the supply was older condo stock.

The chart below shows several of the most active condo and rental apartment projects completed in 2019 based on listing activity on TorontoRentals.com over the past two years. The average one-bedroom and two-bedroom rental rates are shown for 2019, with 2020 also adding the annual change in those averages.

The two downtown Toronto projects, Axis Condos and Smart House have experienced the biggest declines, with the projects experiencing rent declines in 2020 of 13% to 14% for one-bedroom units. One of the least impacted projects is YC Condos near Yonge and Carlton, with declines of just 2% for one-bedroom suites, and an increase of 2% for two-bedroom condos. 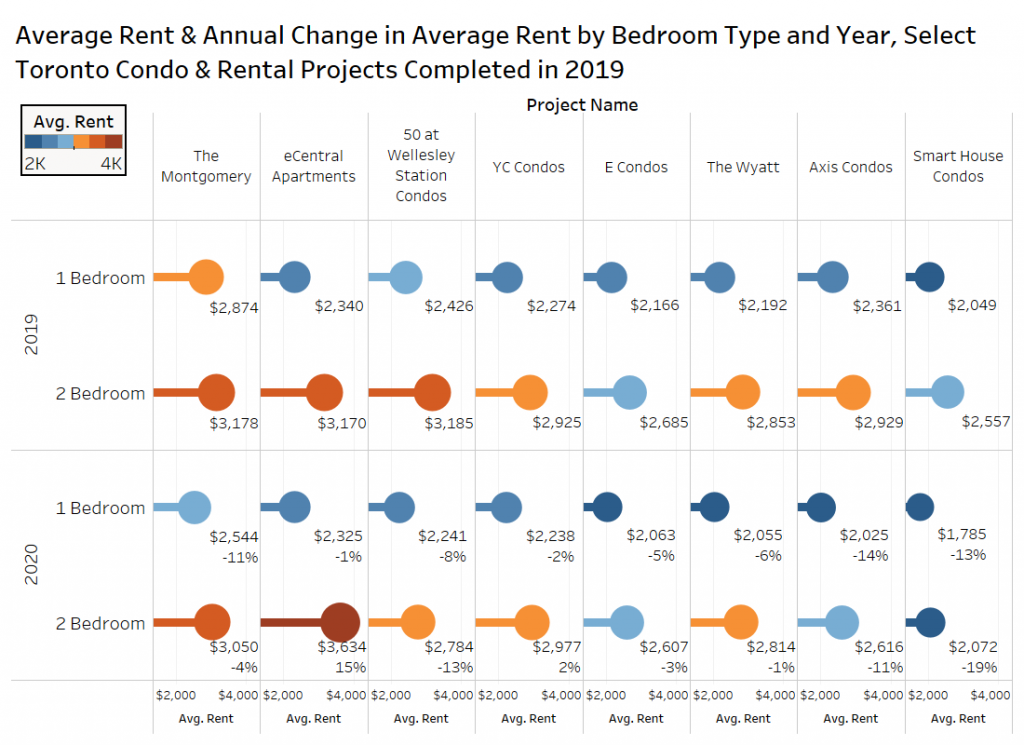 The Montogmery and eCentral are both new purpose-built developments near the intersection of Yonge and Eglinton. eCentral is offering one month free. If the development offered one-bedroom units at $2,340 per month on average in 2019, that’s $28,080 in revenue, and if eCentral collected $2,325 per month in 2020 for just 11 months, that’s $25,575 in revenue, a decline of 9%.

With a second lockdown announced late last year in Toronto and more stringent stay-at-home orders introduced in early 2021, it does not look like downtown offices are going to be opening any time soon, and the borders are likely to stay closed for some time. The vaccine rollout is occurring slowly, but there is no indication that the decline in rents is going to stop any time soon.

According to many Realtors, the market for resale condominiums is picking up, and investors are looking for deals as prices declined year-over-year in the GTA in December. Despite the eviction ban, the more stringent AirBnB rules, and the rapid decline in rents, investors appear to be bullish on the outlook for condos. However, it is difficult to assess whether these investors are buying existing investor units, or buying from end-users, and thus further increasing rental supply. This makes a difference in whether this phenomenon will ultimately help or hurt the rental market.

The first half of the year will likely remain a challenge for landlords and owners as tenants have a lot of choice, and based on the recent data, they have benefitted from waiting further as rents have declined at a rate faster than at any time over the past couple decades.