The Toronto Region Board of Trade (TRBOT) continues to examine ways to unlock Toronto’s transportation gridlock. Yesterday, the group released Getting on the Right Track: Connecting Communities with Regional Rail, which suggests that the most effective and economical way to meet the Toronto region’s growing transportation challenges is to build a regional rail network, using the current 450-kilometre network of legacy rail corridors that radiate in all directions from Toronto’s urban core. 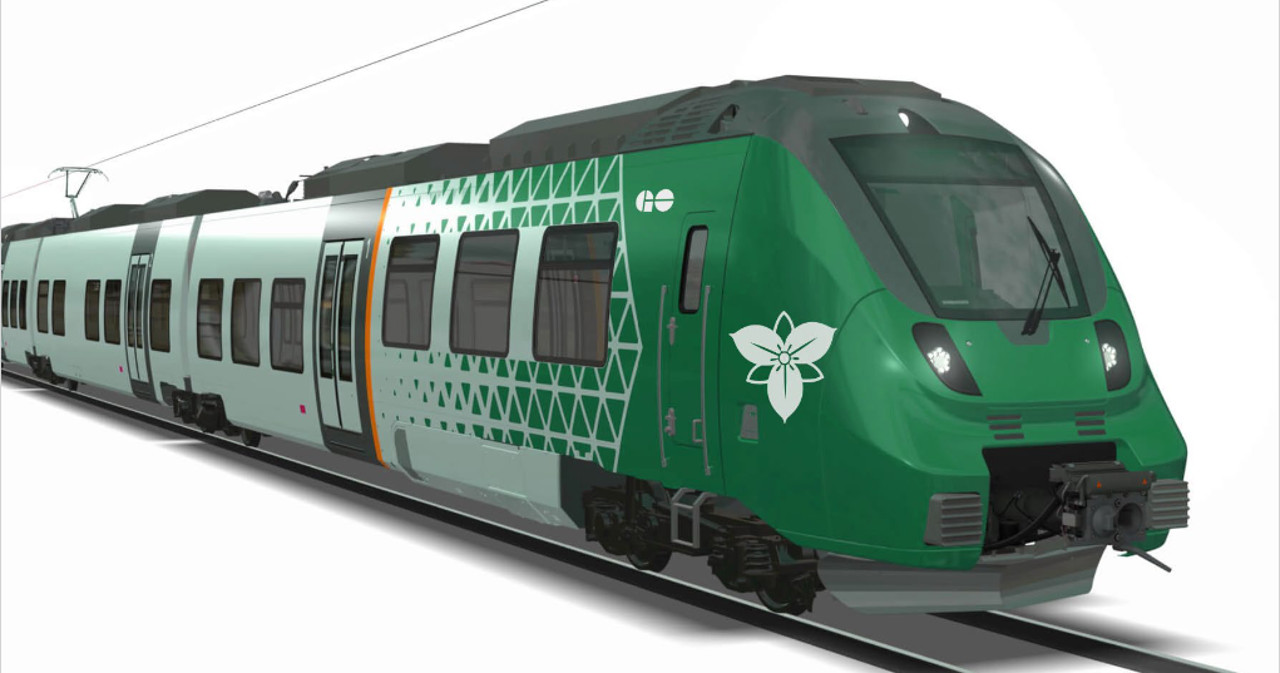 &quot;Mock-up&quot; of a Trillium Network GO train, image, Toronto and Region Board of Trade

According to the report’s author, Jonathan English, the Board’s Director of Transportation Policy, these rail corridors “are invaluable routes for linking together the region’s residents and employers. They are burgeoning routes for off-peak travel. But we have not yet been able to harness their full potential. While GO Transit services have long transported tens of thousands of workers every weekday to their jobs in Downtown Toronto, these corridors could be made useful for a far wider variety of trips. Realizing this potential is especially important in the wake of the COVID-19 pandemic, and the timing is right to consider their full potential as we begin to understand how the future of work is shifting commuter patterns.”

“Despite having excellent GO Transit service in the 905 region for rush-hour commuters heading downtown, public transit is far more limited for other types of trips,” explained Jan De Silva, TRBOT President and Chief Executive Officer. “Many people regularly rely on driving, which is not only the largest contributor to greenhouse gas emissions in our region, but also creates congestion that hinders the movement of goods in Canada’s Innovation Corridor—a major contributor to our economy and our region’s business competitiveness,” she added.

To solve this, TRBOT proposes enhancing GO’s rail network to offer “subway-like” frequent service in both directions all day, every day. It rebrands the current GO system as “The Trillium Network”, which it models after regional rail systems in other cities around the world such as Berlin and Paris. This model, the report explains, “serves as a high-speed, high-capacity backbone to the local transit system, much like a subway. Most riders walk or use the bus to reach stations; heavily used for local trips with destinations widely dispersed across the region.” 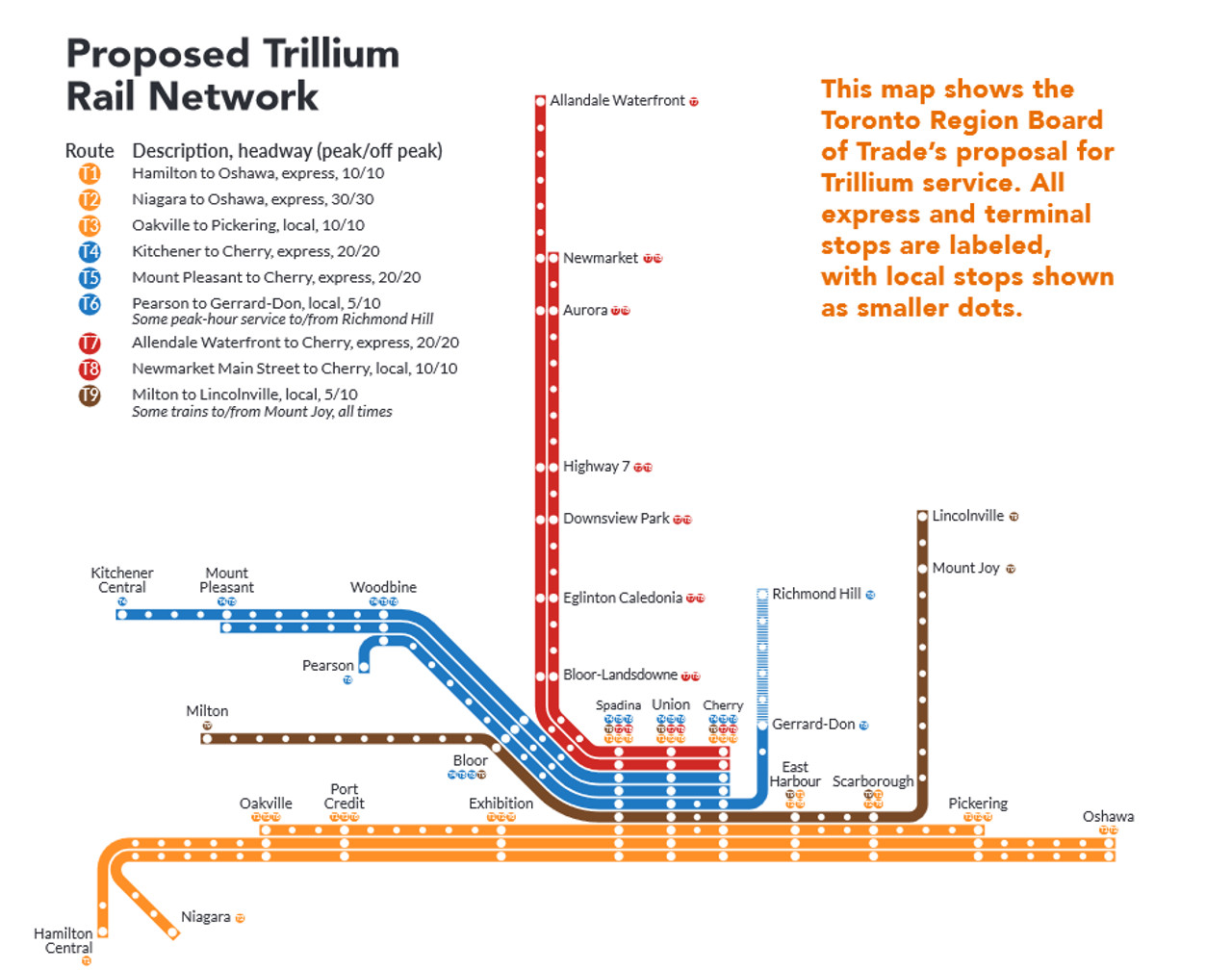 Map of the proposed Trillium Network and its service plan, image, Toronto and Region Board of Trade

The proposal echoes Metrolinx’ plans for the GO Expansion program and Mayor John Tory’s original SmartTrack scheme. “On the busiest rail corridors”, the report says, “particularly through densely populated areas closer to the core, service could be as frequent as a train every five minutes, ensuring adequate capacity that mirrors the subway.”

According to the report,

“The TTC operates its subways with trains arriving and departing better than every five minutes all day. Yet the Kitchener and Stouffville corridors, which have more potential capacity than any subway—due to longer trains, and in the case of Kitchener, a greater number of tracks—run infrequently, with trains coming once an hour or less outside rush hour. This is not by merit of their surroundings—they pass through areas of similar density to the subway and cross many busy bus and streetcar routes. On a few segments—mainly the Milton corridor, the Kitchener corridor between Bramalea and Georgetown, and the Lakeshore West corridor in the City of Hamilton—GO shares tracks with critically important freight traffic that must also be prioritized. The remaining portions of the network, however—including the Lakeshore corridor between Burlington and Oshawa, the Kitchener corridor from Union to Bramalea, and the entire Stouffville and Barrie corridors — are already owned by Metrolinx and have limited freight traffic. Fundamentally, the limited service on these lines is a choice. These routes have as much potential as any subway, but subway-level demand will only materialize if their service levels and fares are made comparable to local transit.”

“This neglected integration and limited service amounts to an incredibly inefficient use of billions of dollars of infrastructure. Hundreds of train cars and invaluable trackage sit idle for all but a few hours of the day, five days per week, while carrying loads artificially depressed by fare policy. The limited market that this service addresses also reduces potential revenue. Commuter rail, while ostensibly highly efficient by focusing only on the highest-density markets, comes at significant efficiency and broader economic costs when compared to regional rail.”

The scheme relies on electrification of all the rail corridors, with trains whose design allows for rapid loading and unloading, with many doors and room for both seated longer-distance riders and standing passengers making short trips. Since electric trains require less time to accelerate and decelerate, electrification would also allow the network to include more local stations along its lines.

The Trillium Network would include both express and local trains along lines. Express trains would operate primarily from stations far from Toronto’s core (for example: Niagara Falls, Hamilton, Kitchener, Barrie, Oshawa.) They would serve passengers at local stations on the outer reaches of each line, then operate express into downtown Toronto, stopping only at key transfer points. 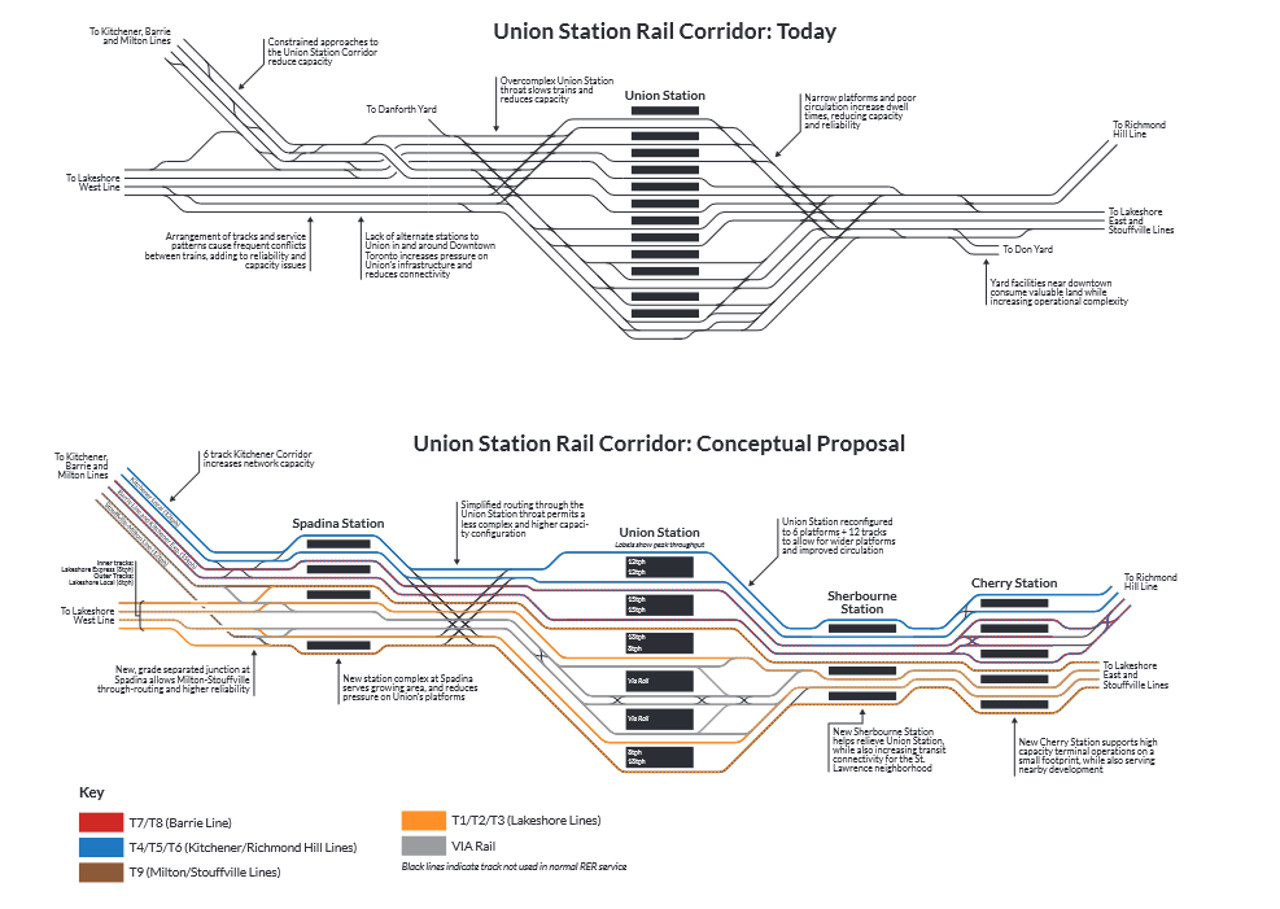 Schematic of Union Station tracks currently and under the Trillium Network plan, image, Toronto and Region Board of Trade

Local trains would operate between the inner suburbs (for example: Brampton, Mississauga, Markham, Pickering), dropping off or picking up passengers at all stops. To help reinforce its role of bolstering subway services, the plan proposes building even more stations in Toronto, especially downtown. By offering passengers more downtown destinations, the Trillium Network would relieve the possibility of overcrowding at Union Station: most trains would travel through that station but wouldn’t start or end their trips there.

The report claims that through-running commuter rail services, like GO Transit, generally have corridors that start on the outer edge of the region and end at a main downtown station. This approach the report states, “works adequately for a smaller system, but it significantly limits capacity. In the report, English points out that turning a train around takes time, due to the need for operators to switch ends and to perform safety measures like brake checks. Time spent sitting at the platform eats up scarce capacity at a busy station like Union. It is therefore far more efficient to ‘through run’—in other words, to pair up corridors coming from either side of the region, so that trains [can] run through downtown and then be turned at the outer edge of the region where station capacity is comparatively abundant. Through-running also brings significant benefits to riders, making single-seat journeys possible across the region. It can also enable a more even distribution of riders across several stations in the city centre. For example, riders coming from the eastern GTA could ride past the crowded platforms at Union Station to another station down the line, like Spadina, if their destination were on the west side of downtown.”

How &quot;through-running&quot; Trillium Network trains would operate through Union Station, image, Toronto and Region Board of Trade

The report states that through-running also increases the efficiency of rail operation. A conventional commuter service starts with empty trains at the outer end and gradually fills up until the train reaches the downtown terminal, at which point it fully empties, often continuing out of service to a storage yard. A through-running service can have passengers boarding and exiting throughout the train’s route, helping to decongest the central station.

This new role for Union Station could offer the opportunity to extensively redesign that structure. The report proposes converting it from a traditional intercity station to an urban regional rail station, with fewer, but much wider, safer and more comfortable platforms, enabling riders to wait for their trains on the platform. The plan would reduce dwell times and increase capacity, by providing wide staircases that enable passengers to rapidly clear a platform after a train arrives. All trains along each line would arrive at the same platform every time, so riders know exactly where they need to go. This model, the report affirms, would “eliminate capacity-killing conflicts between corridors”.

The report emphasizes that, to be successful, the Trillium Network would also require a fare structure that’s attractive to passengers who usually use local transit. This follows up the board’s earlier report in this series, Erasing the Invisible Line, which examines ways to integrate regional transit fares. The board released that report late last year.

In a news release introducing the report, De Silva concluded, “Implementing regional rail in the Toronto region will reduce congestion, improve air quality, and lower the region’s carbon footprint for a fraction of what it would cost to build a cross-regional network of corridors from scratch. Regional rail has the potential to increase access to jobs and services for residents and increase access to talent for employers–which are both necessary to position our region for a strong economic recovery.”

You can read Getting on the Right Track: Connecting Communities with Regional Rail, here (.pdf).

The Trillium plan relies on these frequencies on its base network:

In this scheme, trains along the Richmond Hill corridor would operate only during rush hours beyond the turnaround point in the Don Valley. “Challenging curvature” in the Don valley and conflicts with freight traffic along the line’s northern end would limit the speed of trains. Map of a future, expanded Trillium Network, image, Toronto and Region Board of Trade

By building more infrastructure in freight rail corridors or relocating freight traffic, the Trillium network could expand to a considerably more ambitious regional rail network in the long term. The report offers opportunities to expand the base Trillium Network in future by using:

With these additions, a future network might also include:

The midtown rail corridor would be valuable in relieving the TTC’s Line 2 Bloor – Danforth subway and helping passengers travel east-west across the City without going downtown or through Union Station.

The plan also foresees potential extensions to future development areas, including the Portlands.

What do you think of the Board of Trade’s proposal? Add your comments in the form below, or join the discussion in the dedicated thread on our Forum.