Towering Supercolumns Extend “The One” Higher Above Yonge and Bloor

Mizrahi Developments‘ The One strutted into 2021 with a salvo to shore up its aim of be Toronto’s and Canada’s tallest building. Approved at 85-storeys and 308.6-metres, the plan would add nine additional storeys to bring The One to 94 storeys and 338.3 metres. If those extra storeys are approved, The One would preserve its title when the SkyTower—now getting under construction at the Pinnacle One Yonge site at the foot of Yonge Street—tops off at 312.5 metres. In the meantime, the height increase proposal overshadowed some impressive construction progress at The One, which has made significant strides in forming and assembly for its complex hybrid exoskeleton structural system, designed by UK-based starchitects Foster + Partners with Toronto’s Core Architects. 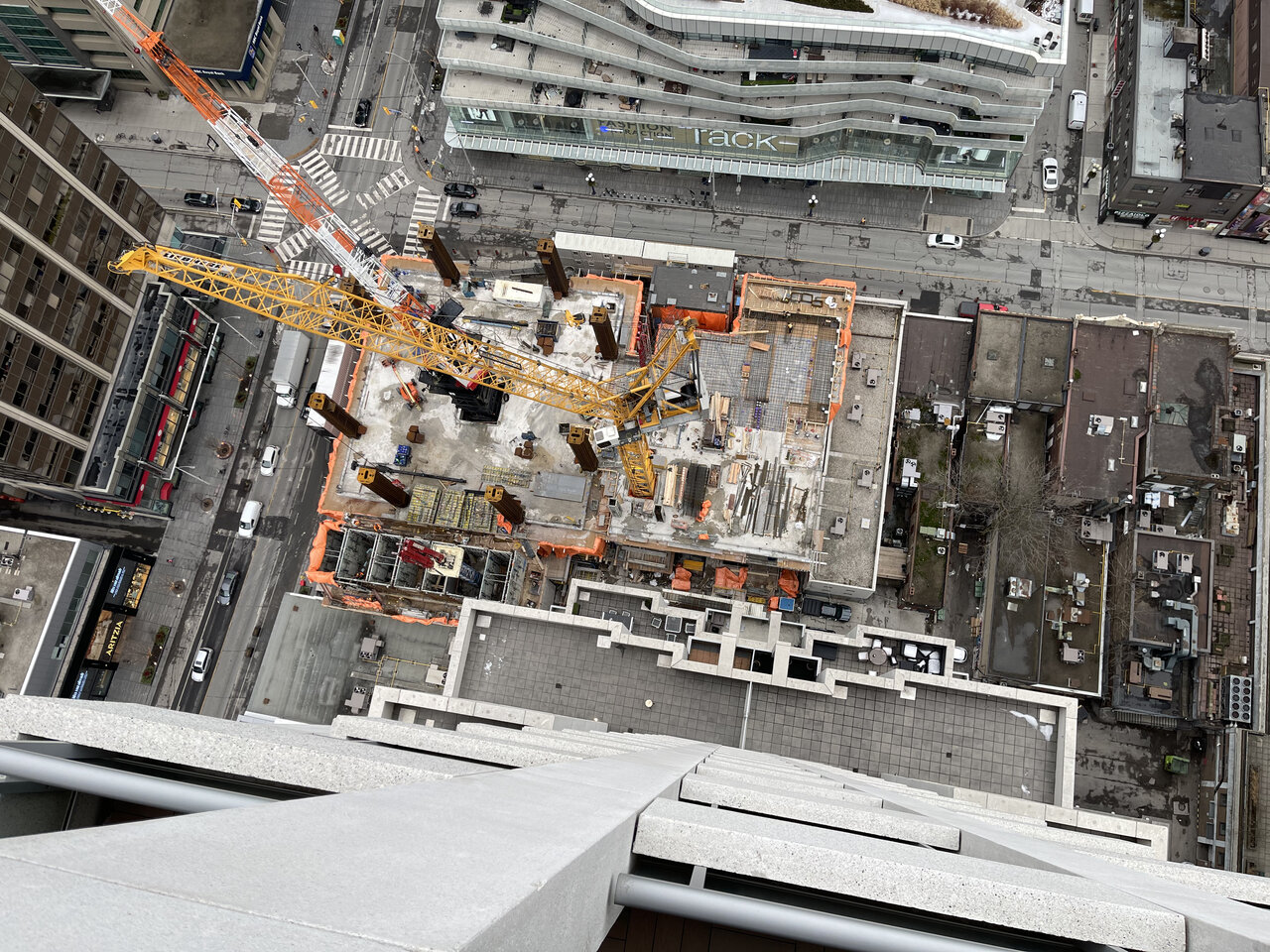 Aerial view of The One, image by Forum contributor Benito

We last checked in on the “supertall” tower’s construction status roughly one month ago, when preparations were being made for a substantial concrete pour to form the second-floor slab. Preparations back in early December included a double-height scaffold spanning through the massive ground floor flagship retail space, providing crews with a work area to begin laying rebar atop floor forms, and surrounding the exposed caps of the eight 40-tonne steel-core, concrete-encased supercolumns and smaller canted crossbeams.

The second floor concrete was poured in a carefully-calculated operation spanning from December 18th through 19th. The 750 cubic metre concrete pour was conducted with the help of a stationary concrete pump and two pumper trucks, fed by a total of six cement trucks. Concrete was in place on schedule for the tower floor-plate, followed a few days later by the south podium’s second floor. 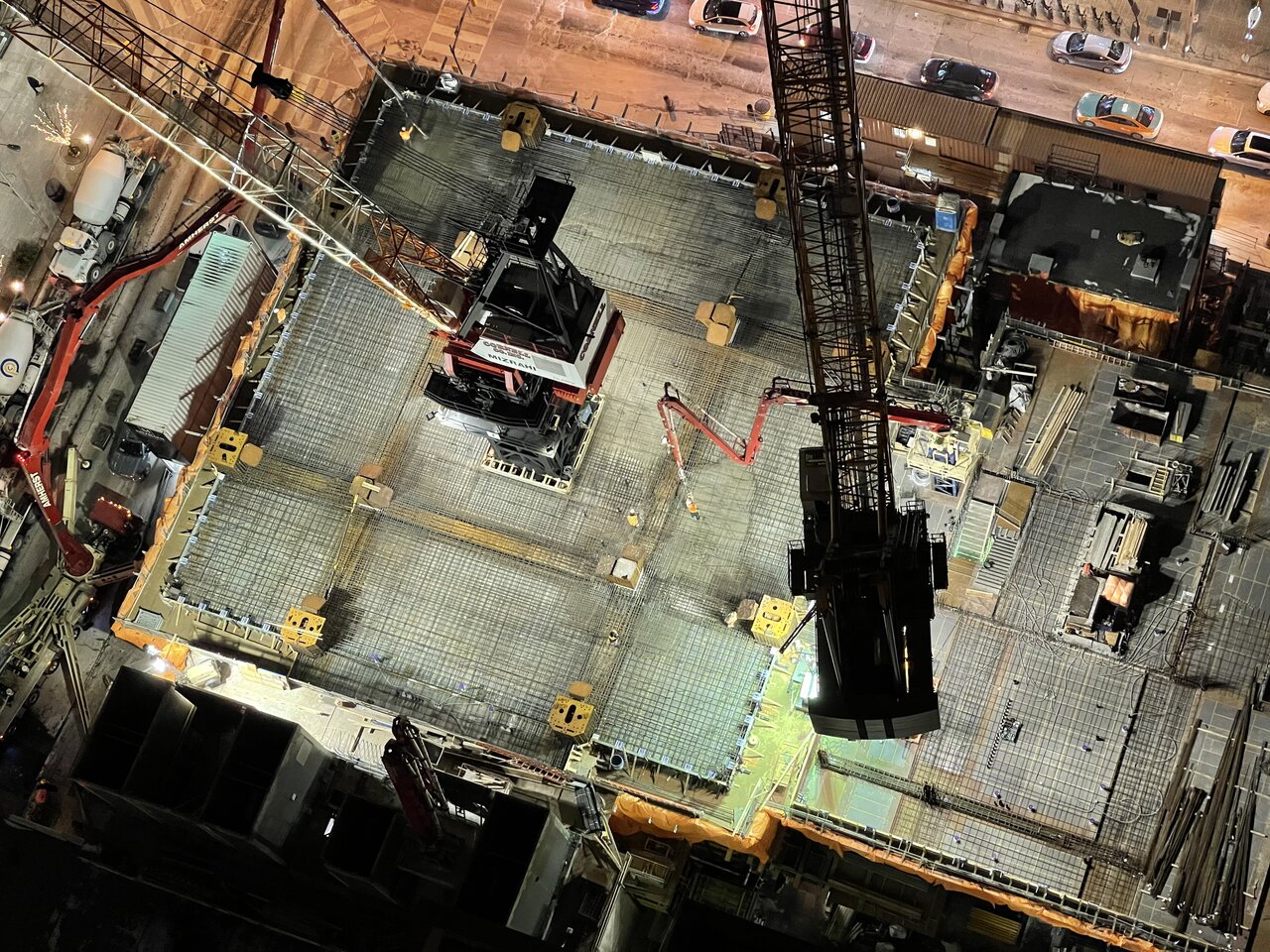 Start of 2nd floor concrete pour for The One, December 18, 2020, image by Forum contributor Benito

Supercolumn installation began atop the second-floor slab in the final days of 2020, and all eight of the steel supercolumn cores have now been extended. These columns will span both levels 2 and 3, which while still tall, are roughly half the heights of the very lofty ground floor. To allow for the ground floor’s expansive, open-concept retail space, the tower’s central elevator core will be “floated” above the third floor, with the canted crossbeams covered in previous updates to help support an extra-thick concrete slab that the elevator core will rest on.

GIF of second floor progress at The One, images by Forum contributor Benito

Below, the massive ground-floor retail space is slowly coming into focus. The removal of shoring jacks and protective tarps is gradually peeling back the curtain on what is sure to be one of Toronto’s most talked-about retail spaces in the years to come. The opening up of this level now offers a clear comparison of the supercolumns in their steel core and concrete-encased states. For a look at how the supercolumns and accompanying exoskeletal supports will be finished, refer to a previous exclusive article where we described mockups of its cladding materials. 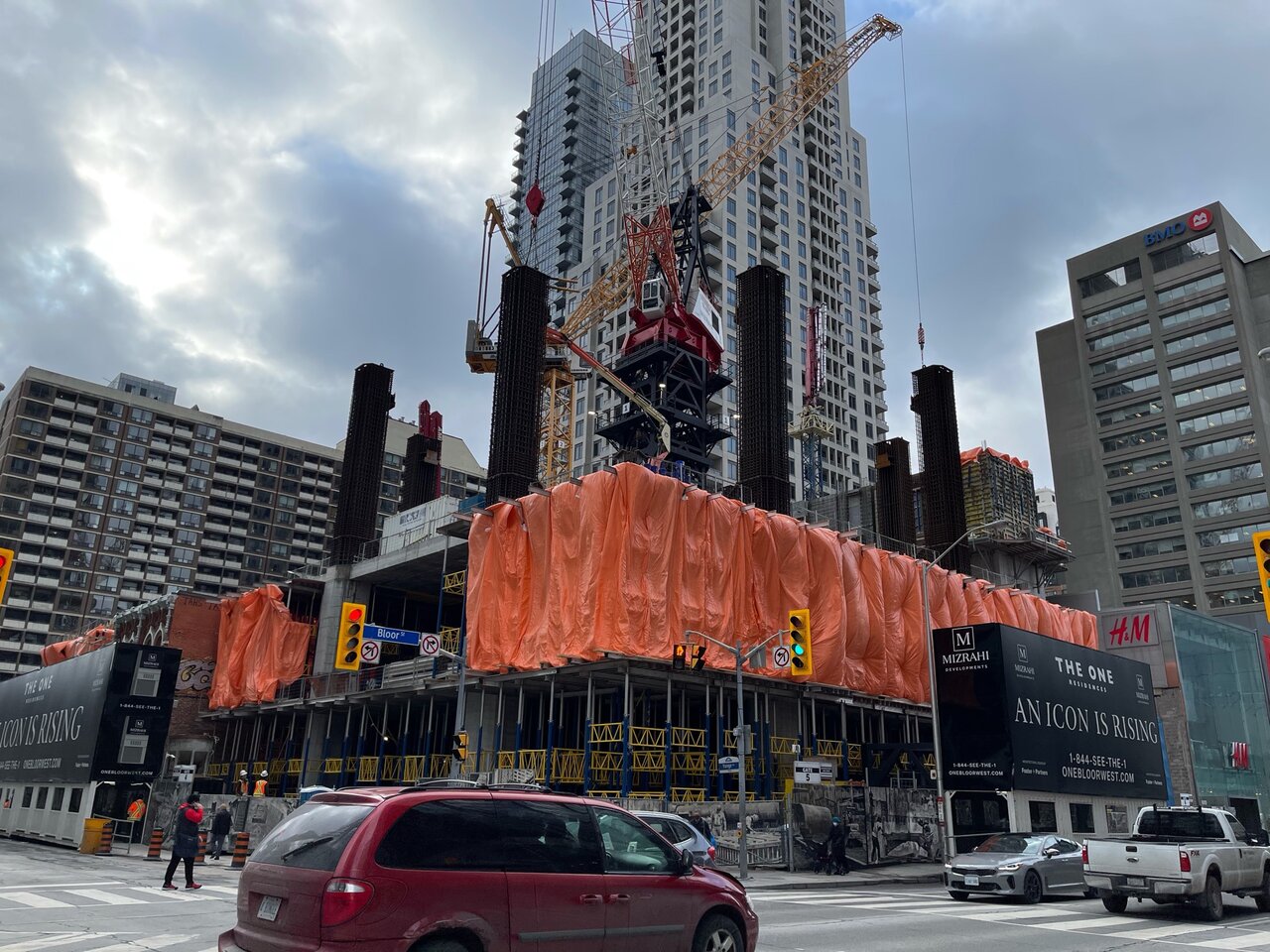 Looking southwest to The One, image by Forum contributor Benito

To the east and west of the tower floor-plate, the two wings of the podium are progressing at varying speeds. The south wing (seen below), which is being built around a retained heritage building on Yonge Street, has now caught up with the tower’s second-floor slab, while the west wing beside Bloor Street West has risen above the tower’s second floor. 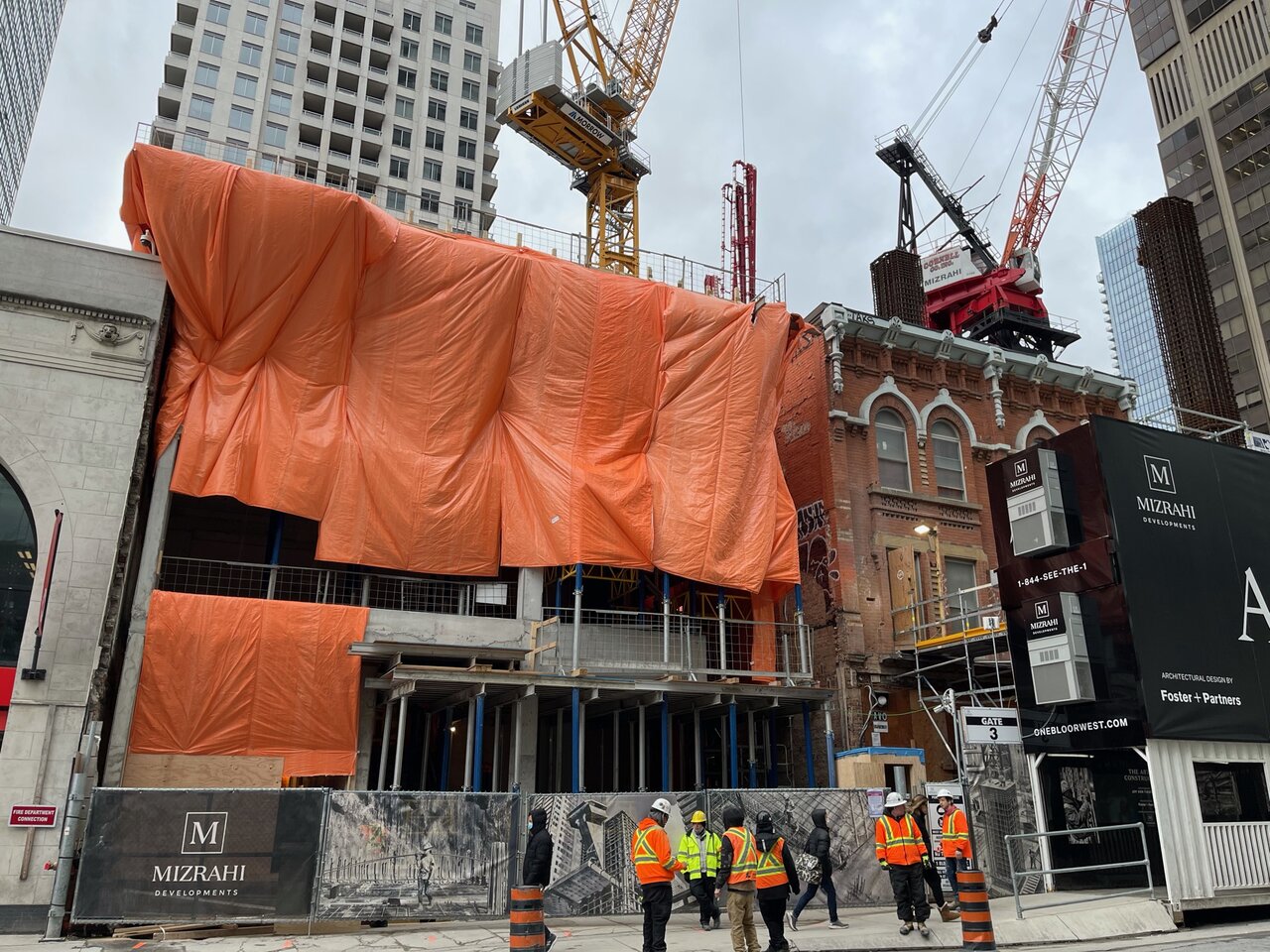 The One’s ascent will remain in the spotlight, as the recent application seeking additional height begins to work its way through the approvals process. Whether we ultimately end up with the already approved 85-storey plan or the 94-storey proposal, The One will be among Toronto’s most prominent landmarks for generations to come.

94-storey version of The One, image via submission to City of Toronto