Steps from Islington subway station in the heart of Etobicoke, Tridel‘s Islington Terrace development is gradually transforming from a construction site into a community. The three-tower, Kirkor Architects-designed condo and townhome complex in this western Toronto borough has been under construction since its first phase began mid-2016. Approaching five years since drilling rigs began to prepare the site, two of the complex’s towers along with most of its townhomes are complete, as the third and final tower continues to rise taller above Mabelle Avenue. 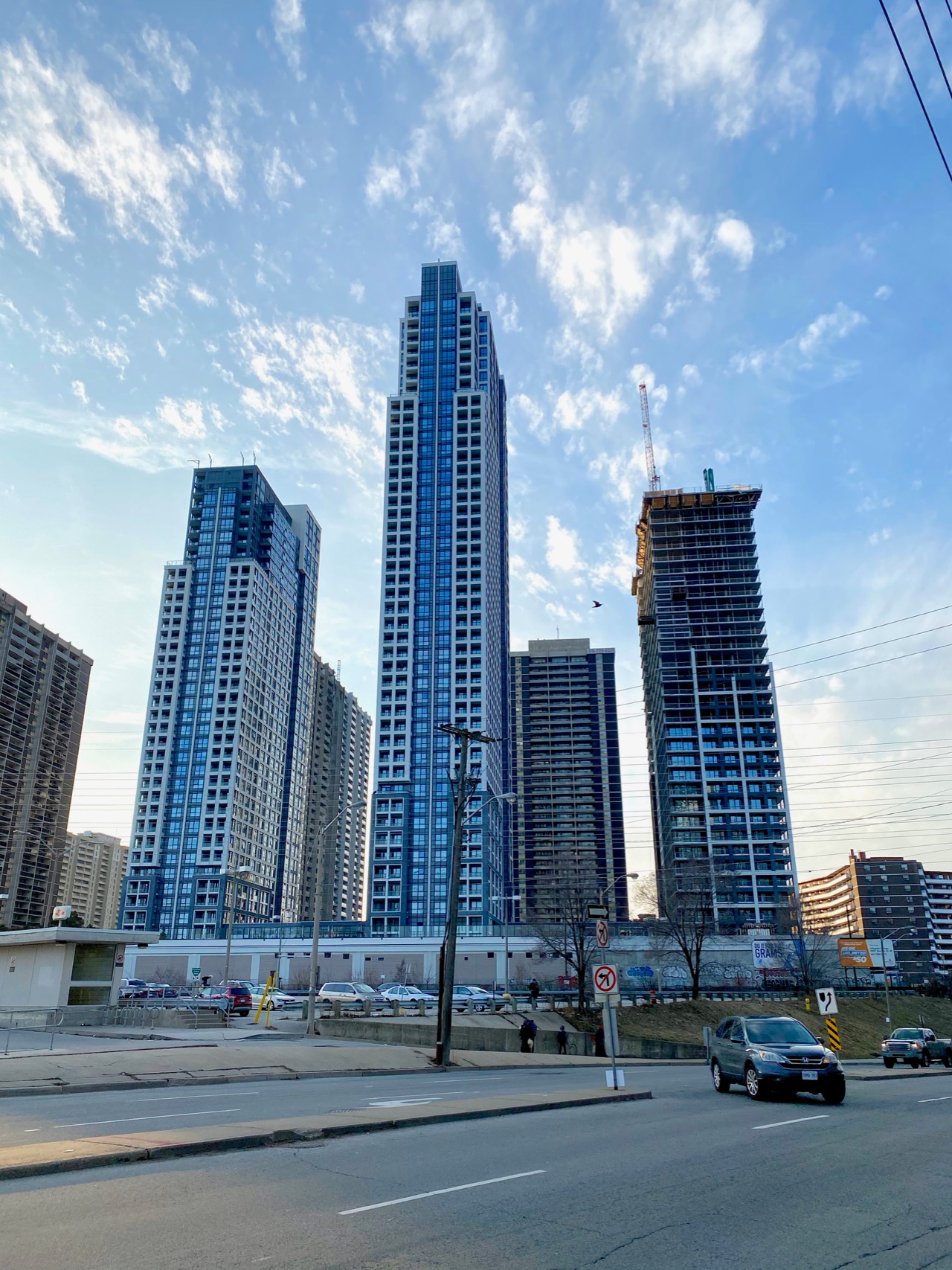 The complex will count towers of 35, 45, and 44 storeys, rising from a shared C-shaped podium. The tallest tower, rising 145.08 metres at the centre of the block, wrapped up construction in early 2020 and is now home to the first of the complex’s residents. To its west, the 35-storey second phase tower, known as Bloorvista, kicked off its underground forming phase in November, 2017, and topped out at a height of 114 metres in late 2019. When we last checked in back in October, 2019, Bloorvista was receiving its finishing touches, a task now complete as the building fills with residents. 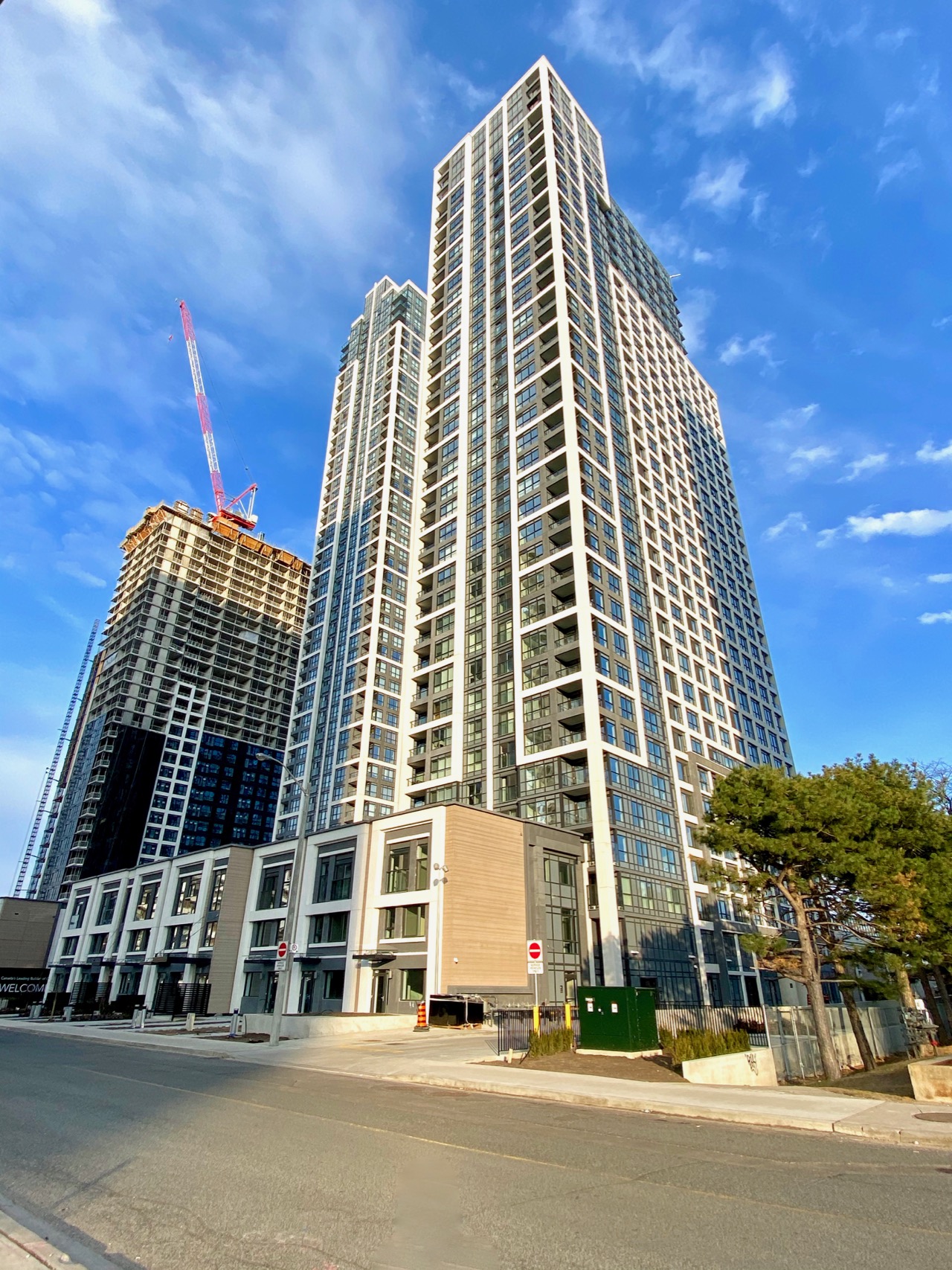 The remaining tower to the east yet to top out is the complex’s 44-storey third phase known as Bloor Promenade. The second-tallest of the trio, the tower has been rising steadily above grade since early 2020, reaching 15 storeys high when we last checked in back in October. The tower has more than doubled in height in the months since, with crews now forming the 33rd level. It will top out at a height of 135 metres in the coming months. 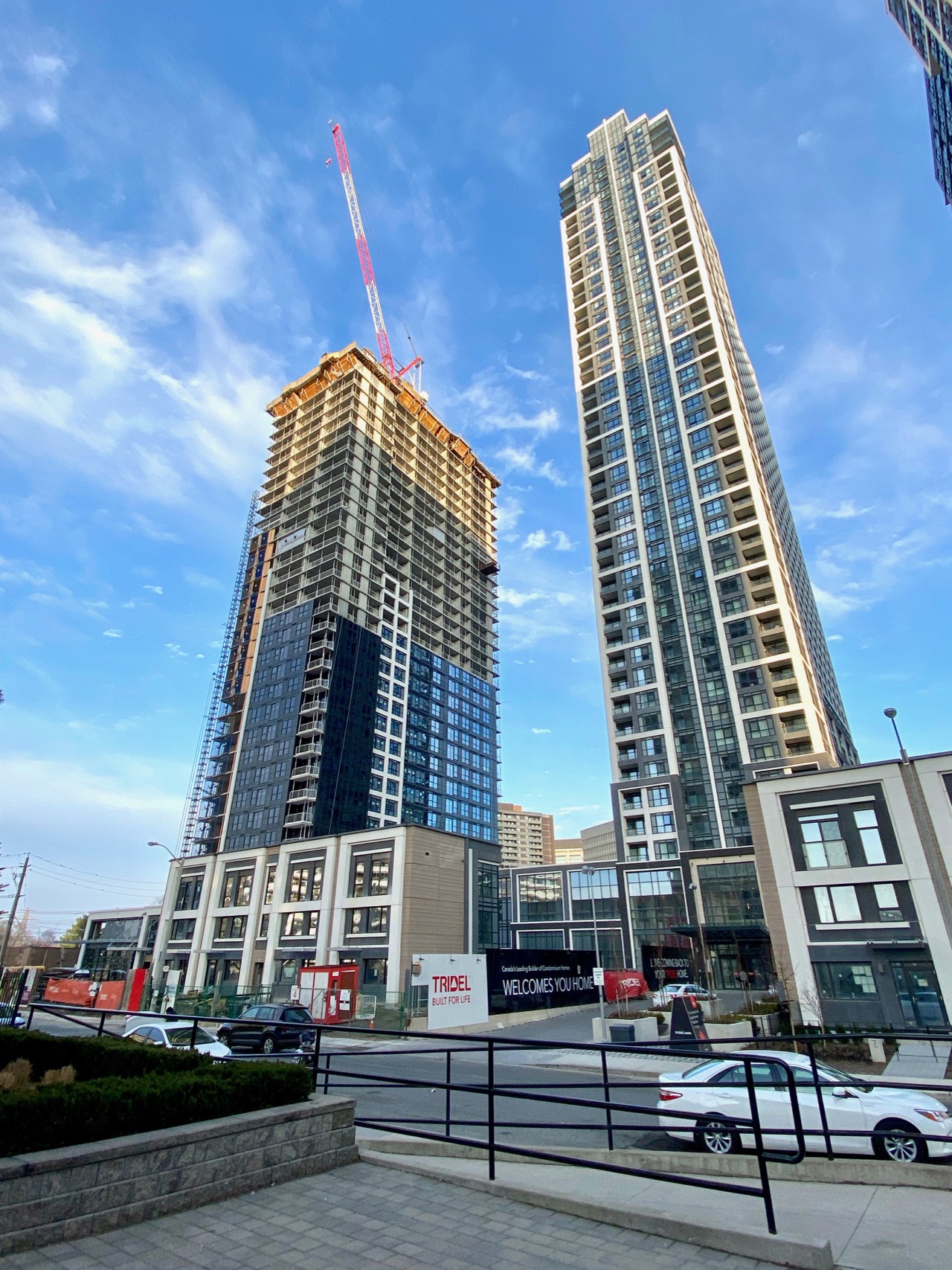 Our October update also revealed the start of installation for the third phase’s exterior finishes, which follow the design cues established by the first towers, but with some key variations that give the third phase a slightly different look than its siblings, using the same component cladding features, but in modified patterns. In particular, Bloor Promenade’s eastern elevation features many more inset balconies behind the two-storey grid of white precast framing. 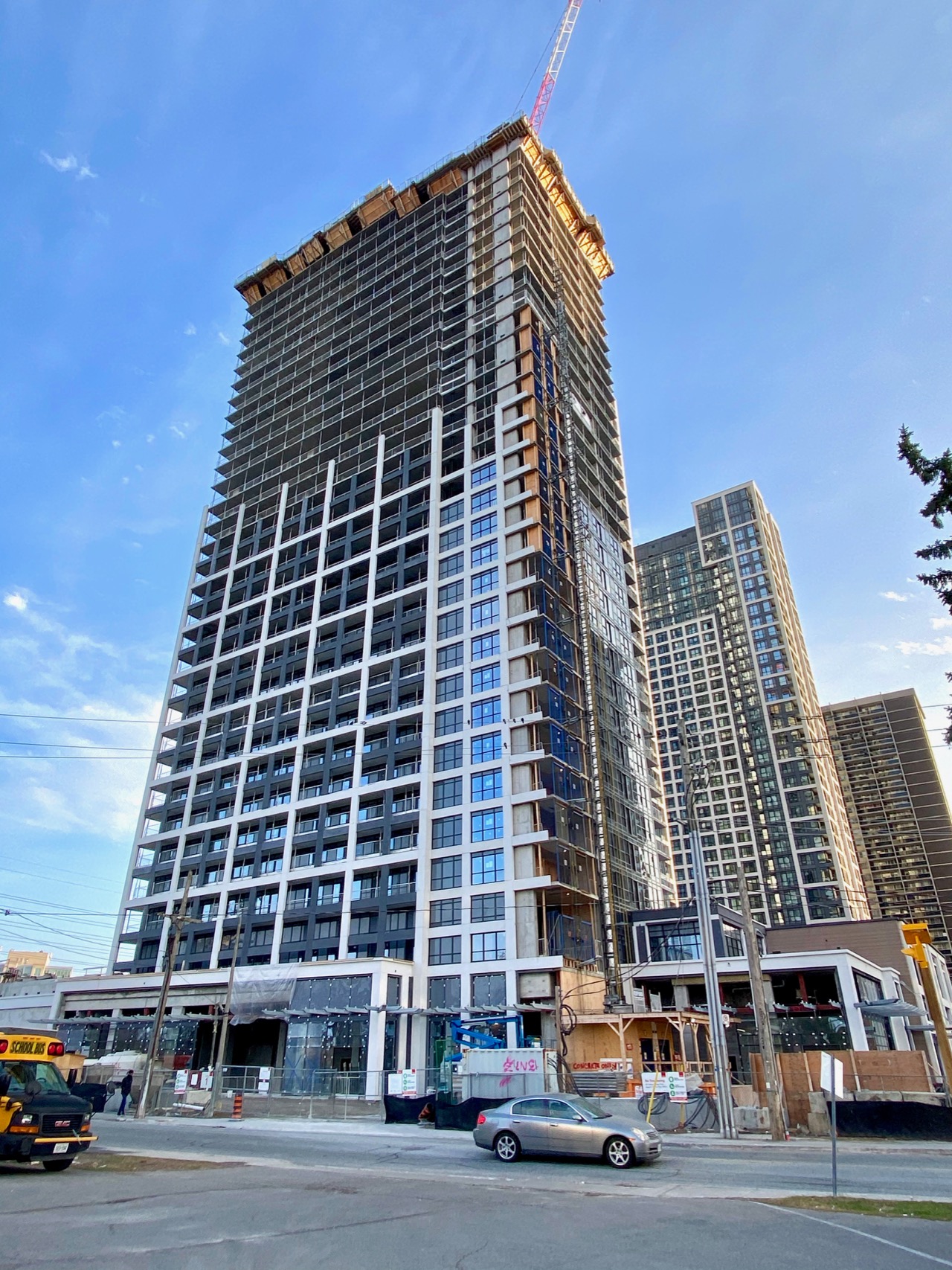 At street level along the north side of the project, the first and second phase’s townhomes are all complete, at least on the exterior, as construction continues on the four final townhomes that front the base of the rising third tower. 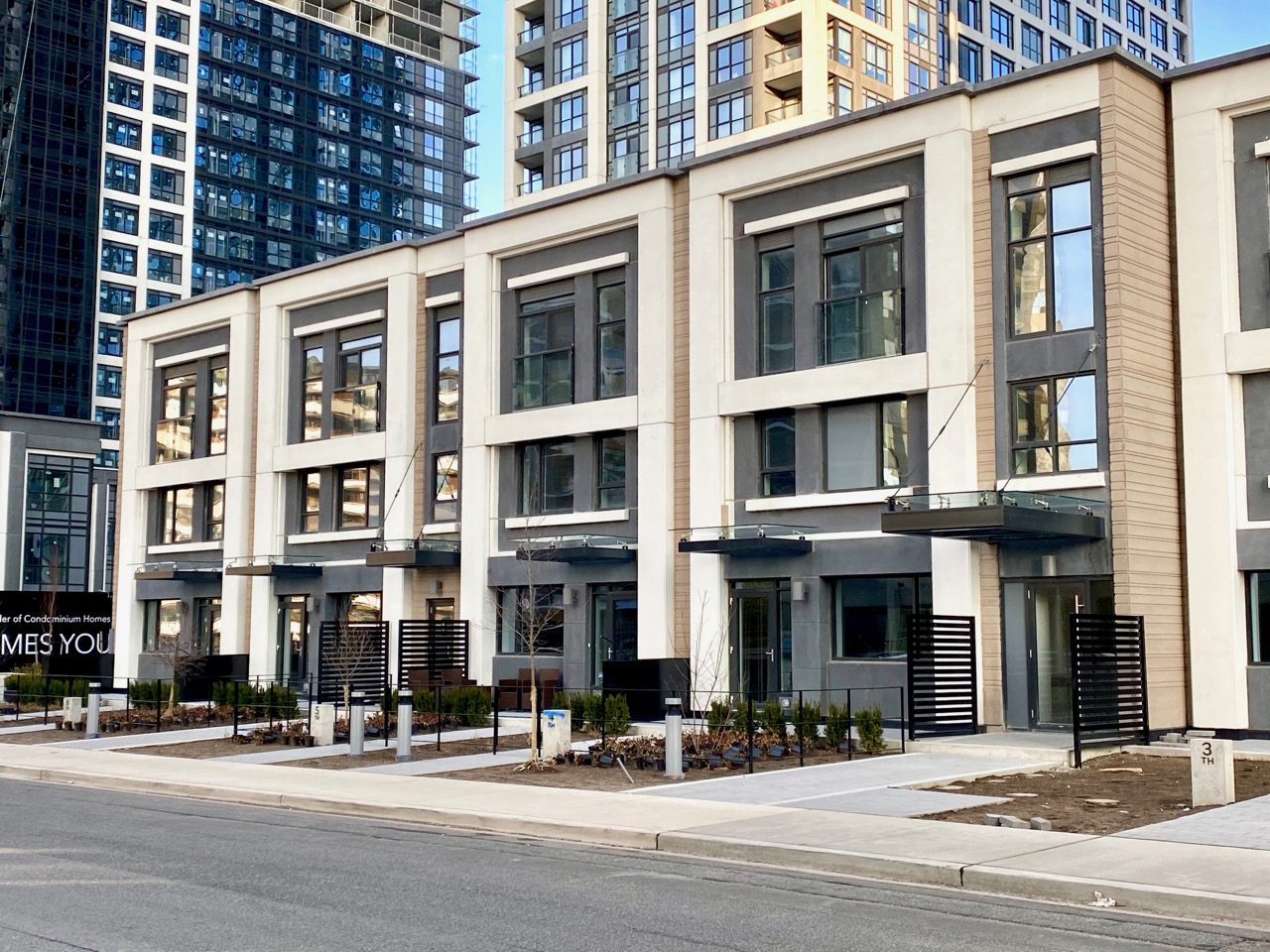