Originally filed in March 2019, Marlin Spring Developments recently submitted revised applications to the City of Toronto for Zoning By-law Amendments to redevelopment a site at 10 through 30 Dawes Road in the Danforth Village area of the city’s east end. 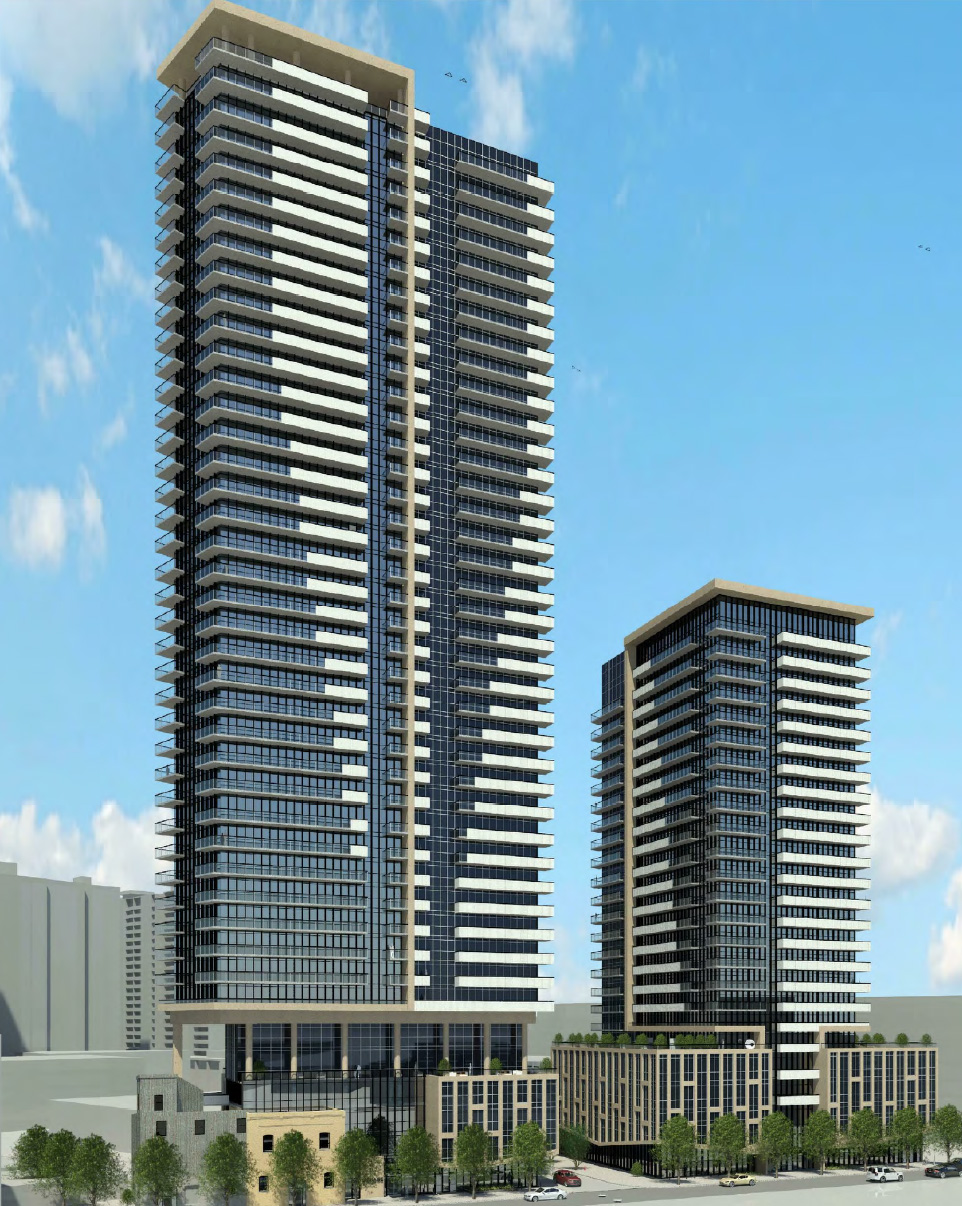 The property is a 0.38-hectare site located within walking distance of Main Street subway station and Danforth GO station and includes a 1906-built grain elevator and mill at 10 Dawes Road and Guest Avenue south of Danforth Avenue. 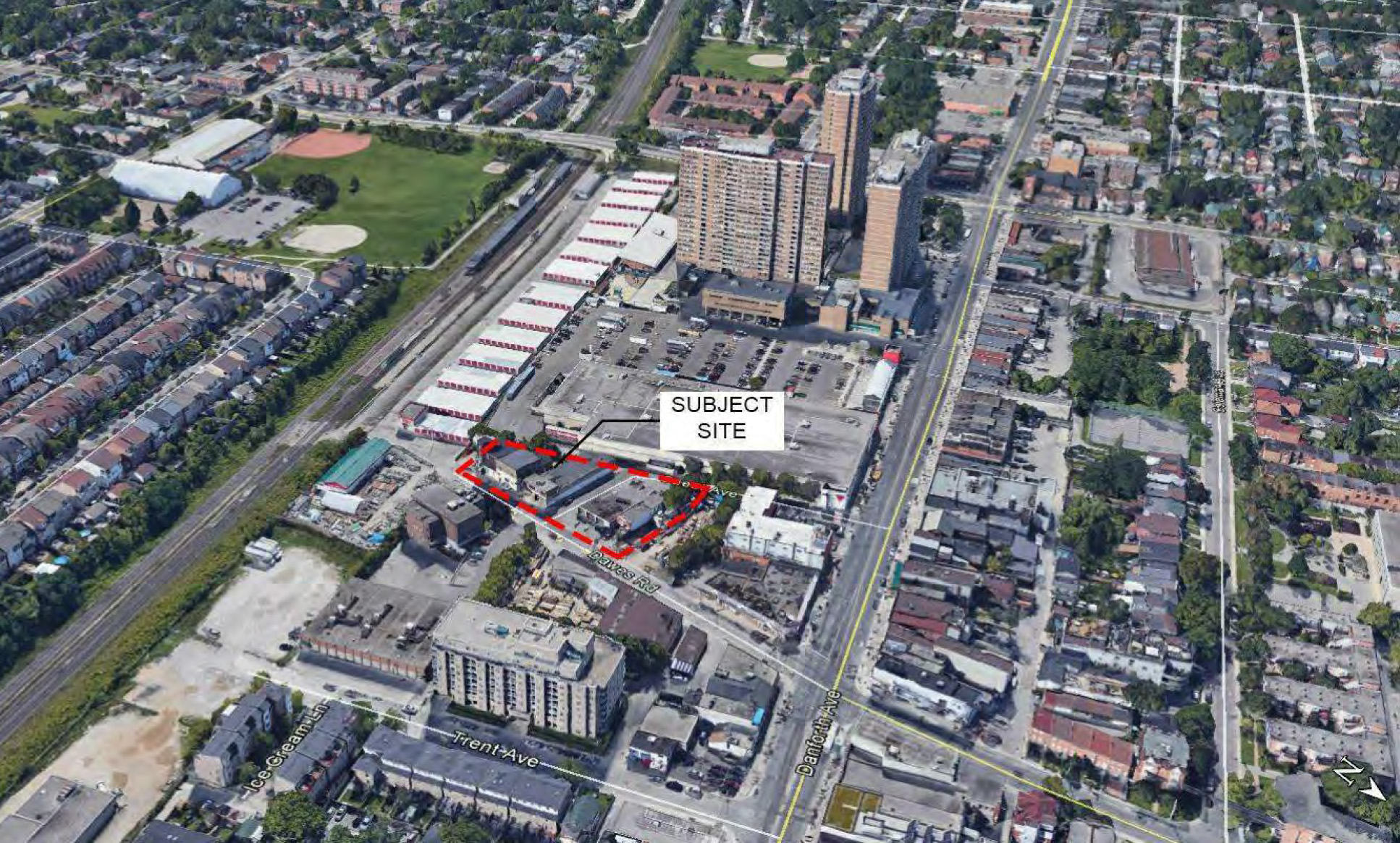 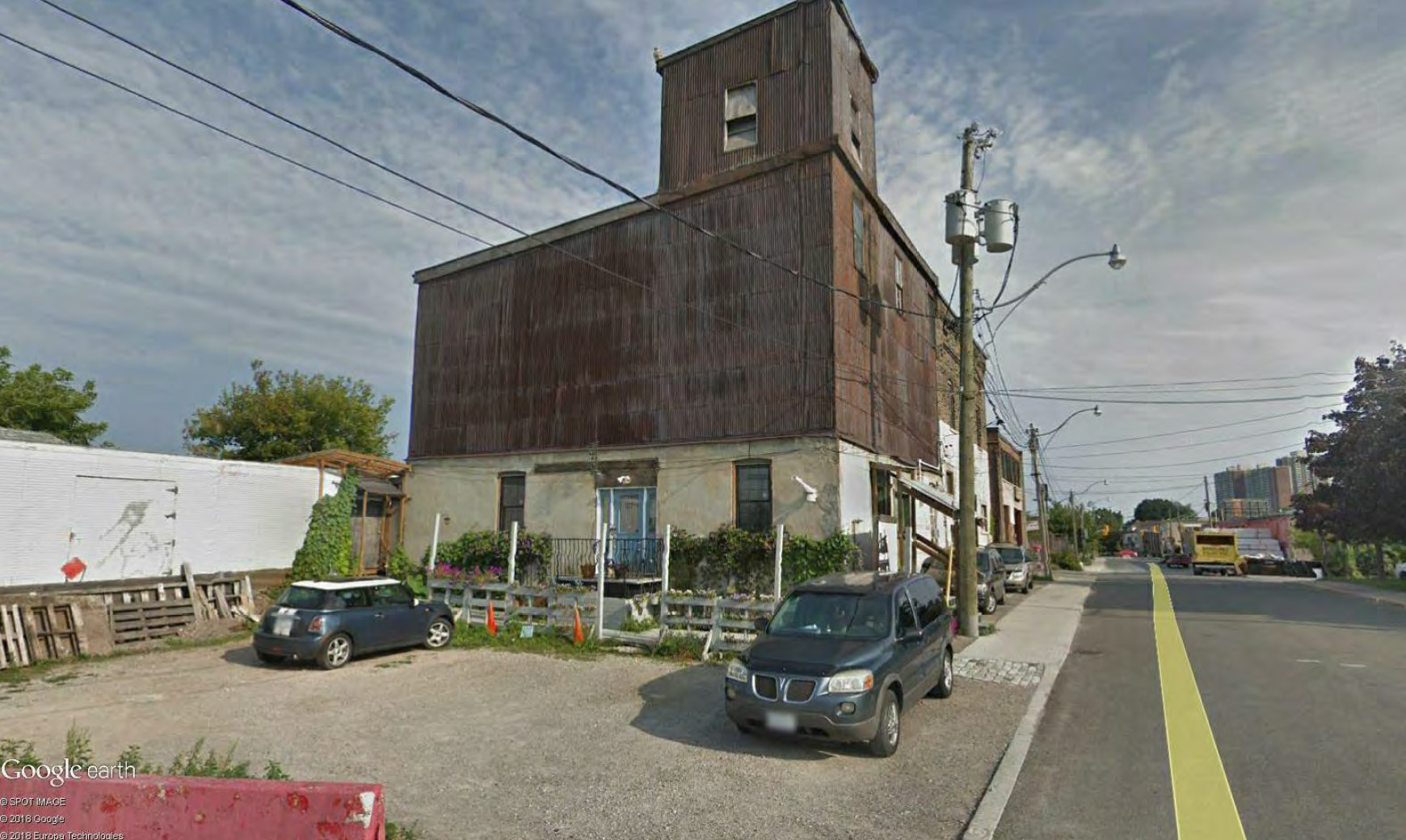 Photo of south end of Dawes Road with the 1906-built grain elevator and mill at 10 Dawes Rd. Image by Googlemaps.

The original 2019 design called for two residential towers of 26 and 33 storeys atop a shared 7-storey podium, framing Dawes Road. The development was for a contiguous block, achieved through the closing and incorporation of the east-west portion of Guest Avenue into the site. At the south end, the podium stepped down to transition to the adjacent 3-storey former grain elevator building, which was retained in its entirety but not incorporated into its design. 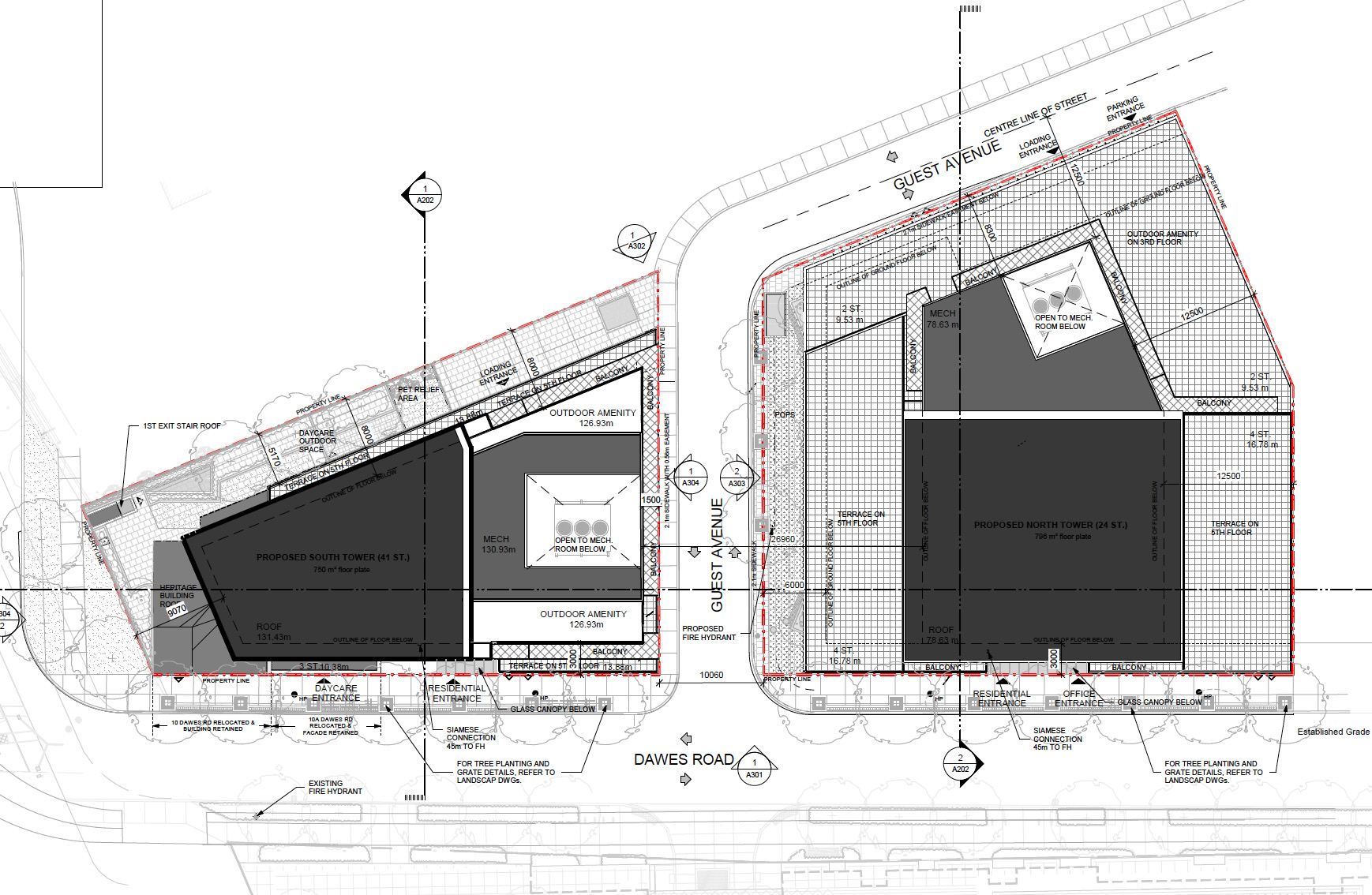 Since the original submission was filed in March 2019, the proposal has been modified in response to comments from City staff and updates to the applicable policy context.

The revised proposal, designed by IBI Group, comprises a 41-storey South Tower and a 24-storey North Tower located on either side of Guest Avenue, which is no longer proposed to be closed. Instead the proposal for a two-site development allows for improved access and connectivity through and around the site. In response to massing comments from City staff, the height of the base buildings has been reduced to 4 storeys. Retail and daycare space would join residential lobbies at grade, with 1,946 m² commercial office space at the 2nd level. 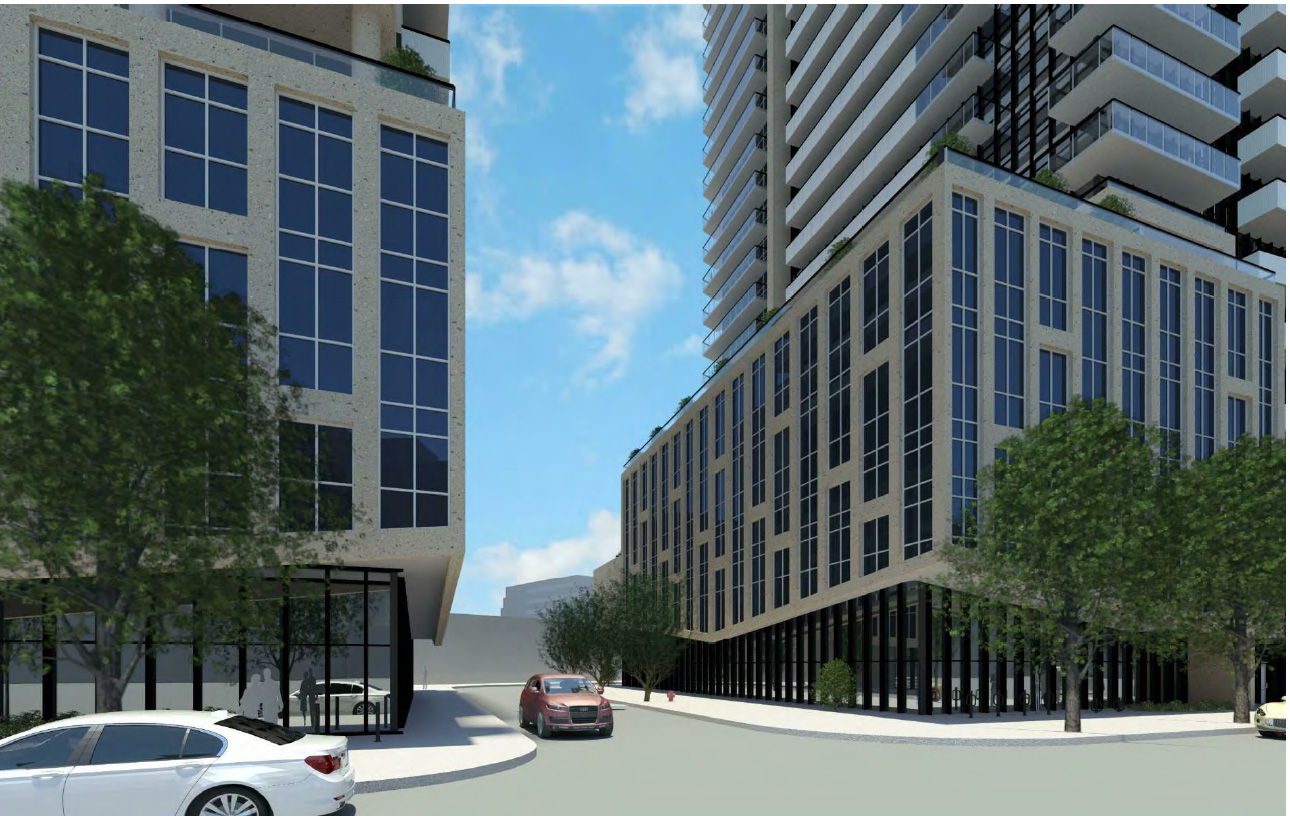 To better orient the proposed development on the site, the existing sidewalk along the entirety of Guest Avenue is retained, with a proposed 183 m² linear POPS (Privately Owned Publicly accessible Space) along the north side of Guest supplementing the surrounding parks and open space network.

The revised proposal retains and incorporates the existing 3-storey mill at 10 Dawes Road, identified as a Potential Built Heritage Resource. The Planning Rationale explains, “The findings of the Heritage Impact Assessment indicate that the development related impacts on the cultural heritage value of the site can be mitigated through a referential design strategy to complement the restored buff brick of the mill building, in addition to a robust interpretation program which will be implemented to communicate the site’s history as a rail-adjacent mill and grain elevator in Little York. The interpretation program will aim to ensure that attributes removed through construction, such as the mill’s interior columns, mezzanine and boiler room, can still be utilized to enhance the site’s historical function. Due to the extensive scope of conservation, future conservation and interpretation plans have been recommended to provide a more detailed conservation and interpretation program scope.” 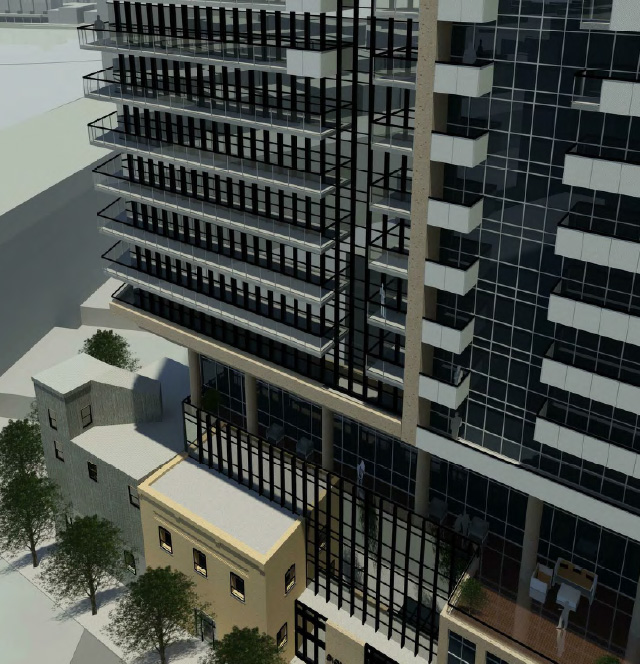 Southeast corner of the South Tower with heritage fronts behind which is the proposed daycare. Designed by IBI Group for Marlin Spring Developments

A four-level underground garage, accessed via a ramp from Guest Avenue, at the northwest corner of the North Tower site would provide 285 vehicular parking stalls. 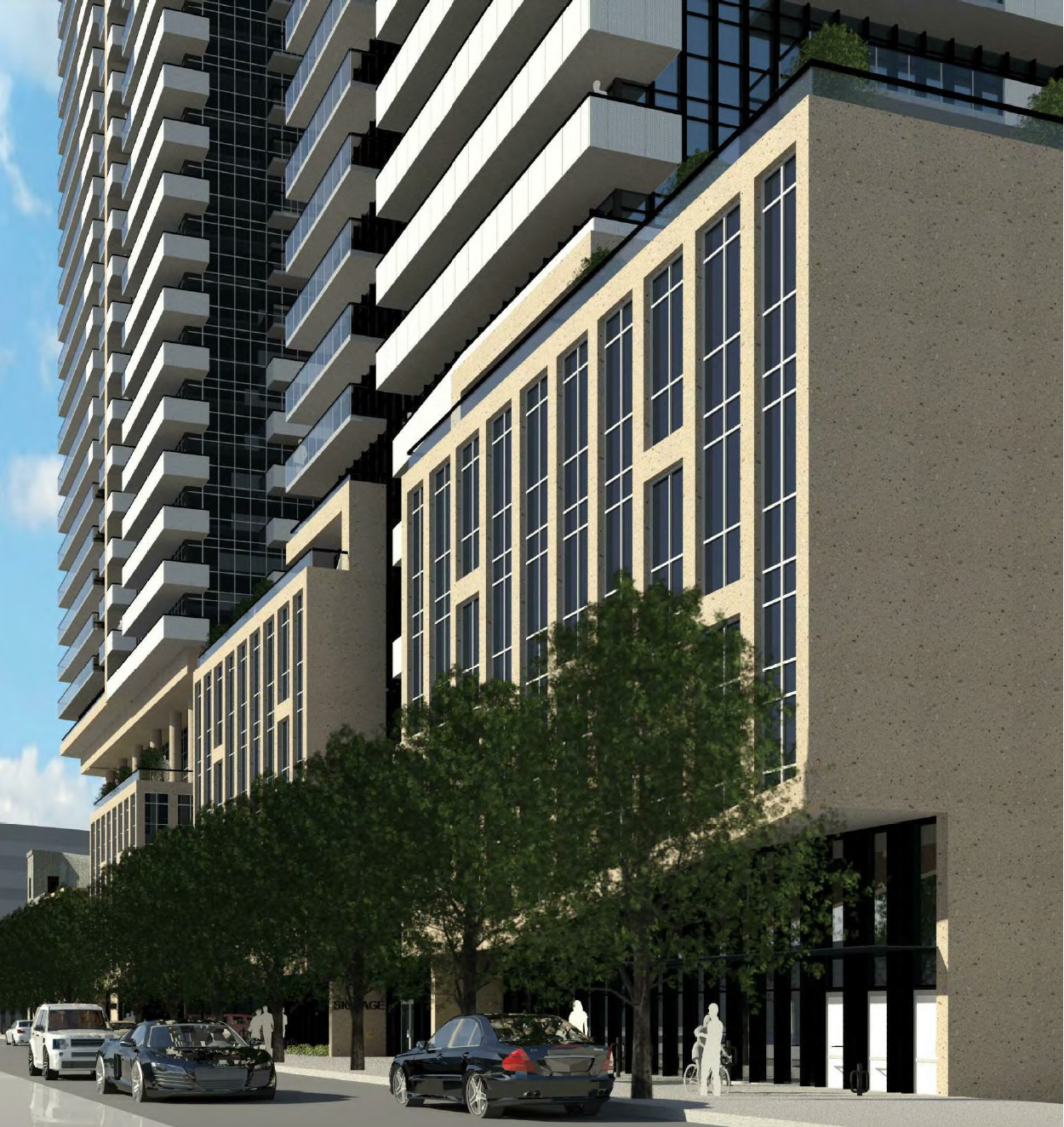